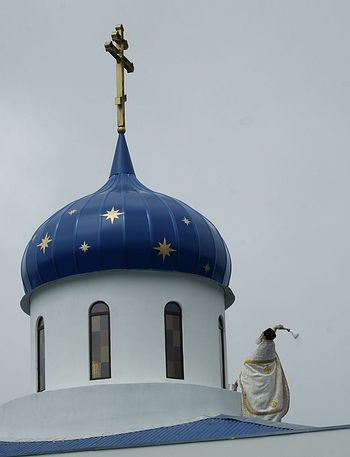 The clergy and faithful of Costa Rica recently celebrated the 20th anniversary of the parish of Our Lady of Vladimir Church. On Wednesday, November 5, the church’s current rector, Archpriest Serge Lukianov, arrived in Coronado. Two days later, Archpriest Daniel McKenzie arrived in the Costa Rican capital of San José, not far from the city the church calls home. Fr. Daniel was the first priest of the parish, and he and Fr. Serge quickly went to work helping with the final preparations for the blessing of the cupolas and the celebration of the parish’s anniversary.

The history of the Russian Orthodox mission in Costa Rica under the jurisdiction of the Russian Church Abroad began 20 years ago, when Fr. Daniel traveled to Costa Rica in 1994 at the request of warden Nicholas I. Zakharov, and celebrated the first Divine Liturgy there. At that time, there was no church yet, and services had to be held in private homes. Despite its distance from the Orthodox world, priests serving in the surrounding areas were able to find the time and strength to spiritually nourish the parishioners in Costa Rica, instructing them with wise counsel and protecting the faithful and the parish as a whole from temptations and dangers, supporting their efforts through prayers and words of comfort and encouragement. Even during his first visits, Fr. Daniel instilled in the people the hope to obtain land and build a Russian Orthodox church.

Five years ago, construction began on the church. Soon the Lord sent parishioners a new priest – Fr. Rodion Aragon, an assistant to Fr. Daniel, who had enrolled in Holy Trinity Seminary in Jordanville. His Matushka Elena did all that she could to help support the labors of her husband and the mission: she sang and read on the kliros, baked prosphora, became involved in the process of obtaining and preparing land for the church, and rallied the faithful around these good works unto the glory of God. But their family and community were struck by a great trial – the sickness and repose of Priest Rodion. In those difficult days, the clergy and faithful of the Eastern American Diocese prayerfully supported the family and parish. Appointed rector, Fr. Serge would divide his time between his responsibilities as secretary of the Eastern American Diocese and his work in the Coronado parish: he would come to spiritually nourish the parishioners – confessing, baptizing, wedding, bringing back to God’s church those who had left over some or another misunderstanding, gathering funds to benefit the mission, negotiating with benevolent organizations, and bringing liturgical vessels for the mission. One year ago, the Lord sent parishioners a kind-hearted laborer from the Antiochian Orthodox Church – local priest Ignacio Miranda, who currently nourishes primarily Spanish-speaking parishioners. 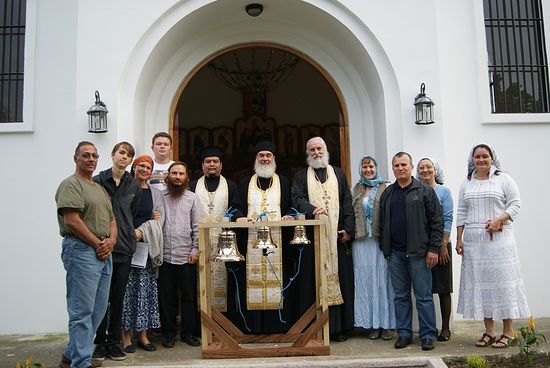 Before the All-Night Vigil on Saturday, November 8, the clergy performed the blessing of three new bells donated to the church and, for the first time in twenty years, the peal of bells sounded out around the church. The bells were cast in Voronezh, Russia, the largest of which bears the inscription, in Russian, "Church of the Vladimir Icon of the Mother of God in Coronado, Costa Rica." Fr. Serge served Vigil, while Frs. Daniel and Ignacio heard confessions. Also lit for the first time during All-Night Vigil was the panikadilo (chandelier), fashioned by Alexander V. Gertsovich. After Vigil, a litiya was served for the parish’s departed founders, including Priest Rodion Aragon.

Prior to the start of Divine Liturgy on Sunday, November 9, the clergy performed the blessing of the iconostasis, which had also been fashioned and installed by Alexander Gertsovich, as well as of a new kiot, in which was placed an icon of the Holy New Martyrs & Confessors of Russia and the Crucifixion. Also blessed was a new mosaic icon of the Most Holy Theotokos, donated to the church by Alexey Anaskin. Fr. Serge celebrated the Divine Liturgy, co-served by Frs. Daniel and Ignacio. Upon completion of the service, the priests climbed onto the roof of the church and blessed the new cupola and cross.

Special note was made of the selfless labors of the clergy and parishioners on behalf of the mission. For her labors on behalf of the Holy Church, Fr. Serge presented Elena A. Kharina with the highest honor of the Russian Church Abroad – the Order of the Kursk Root Icon of the Mother of God, 3rd Class. At the beginning of the year, beginning with her request to the Eastern American Diocesan, which in turn appealed to the Fund for Assistance to the Russian Church Abroad, the parish obtained a car for use by the local priest to travel to services. Thanks to Elena’s hard work and direct involvement, funds were raised for the purchase and installation of the cupola, icons, vestments, and liturgical vessels. 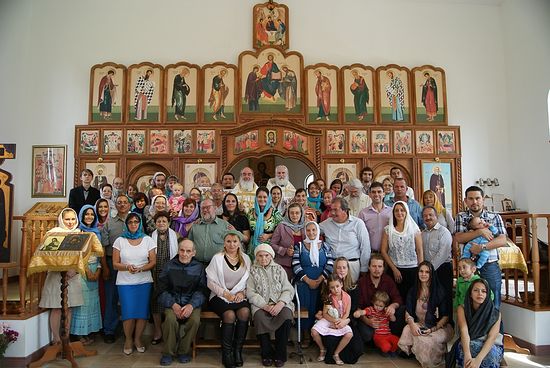 Diocesan gramotas were presented to the founder of the Mission in Costa Rica and Haiti, Archpriest Daniel McKenzie, as well as to Priest Ignacio Miranda and to the Parish of our Lady of Vladimir on the occasion of its 20th anniversary of its founding. For his selfless efforts, Alexander V. Gertsovich was likewise presented a diocesan Gramota.

Fr. Serge then read aloud a directive from His Eminence, Metropolitan Hilarion, removing him as rector and appointing Archpriest Daniel McKenzie rector of Our Lady of Vladimir Church.

The celebration of the mission’s jubilee concluded with a banquet hosted by the Russian Federation Embassy in Costa Rica and likewise dedicated to the Day of National Unity. A diocesan Gramota was presented to Russia’s ambassador in Costa Rica, Alexander K. Dogadin.

In his epistle to the clergy and faithful on the occasion of the mission’s jubilee, His Eminence Hilarion, Metropolitan of Eastern America & New York, congratulated the clergy and parishioners, sincerely thanking all those "who applied their minds, hearts, and hands to the construction of this holy church," and expressed hope that this church will "remain unshaken until the end of time and, most importantly, be always filled with people." And may the Mother of God, the unfailing Protectress of the church that bears her name, always keep those who serve and pray in it under her protection. Sergey Lavrov donates an Icon of St. George the Victory-Bearer to an Orthodox convent in Guatemala
The Holy Trinity Convent was founded by Mother Ines and Sister Maria (Amistoso) in April 1986. “Russians in Costa Rica Are Only Missing an Orthodox Church”
A talk with Nicholas Zakharov, warden of the Vladimir Mother of God community in San Jose, Costa Rica.

“Russians in Costa Rica Are Only Missing an Orthodox Church”
A talk with Nicholas Zakharov, warden of the Vladimir Mother of God community in San Jose, Costa Rica.
Miguel Palacio
Costa Rica is probably the most peaceful country in Latin America. It has everything a person could dream of. Only an Orthodox church is needed to make a Russian completely satisfied there. In the mid 1980’s, there were practically none of our countrymen there.
Comments

My fiancйe is Russian Orthodox from Aukraine. I'm a nondenominational Christian in Fort Worth, Texas. I want to marry my fiancйe in an a Orthodox Church. I recognize I'd have to pay an attorney to comply with Costa Rica law of marriage.

However, both my fiancйe and I want to be married in church. May I hire you and rent your church for a wedding. My fiancee's mother will be the only attendee.

I am Russian buy Ancestry