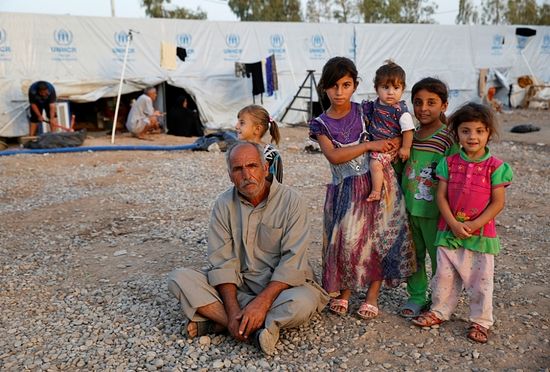 A displaced Iraqi man, who fled from the Islamic State violence in Mosul, poses for the camera with his daughters at Baherka refugee camp in Erbil, September 19, 2014.

As Islamic State extremists continue their reign of terror through Iraq and Syria, the chaos, violence and persecution forced upon the thousands of people in the region has caused 90 percent of Orthodox Christians in Iraq to flee the sanctity of their homes, according to the Greek Orthodox Bishop for Baghdad, Ghattas Hazim.

Hazim, who is also the Greek Orthodox Bishop of Kuwait and other surrounding areas, said in a recent interview with Al Monitor that he fears for the future of the Orthodox Christian presence in Iraq, Syria, and the whole Mesopotamia region. Citing unspecified statistics, Hazim said that 90 percent of Iraqi Orthodox Christians have been displaced from their homes. He added that only 30 of 600 Orthodox families remain in Baghdad as ISIS' quest to conquer the city continues.

In Mosul, the Islamic State's stronghold in Iraq in the northern Nineveh province, Hazim said only 10 Orthodox families remain, although it's believed that the only Christians left in Mosul are those who could not afford to, or physically, flee. 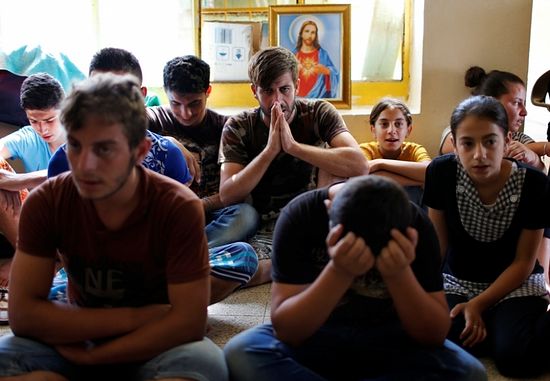 While a United Nations report from earlier this month points out that over 1.8 million people have been displaced in Iraq as of Aug. 30, with two-thirds of those displaced in areas under ISIS control, Hazim said that western Christians are not doing enough to help Middle Eastern Christians emigrate to areas of safety.

"It is not true that the West is facilitating the emigration of Christians," Hazim said. "I know many Christians and Orthodox in particular who went to embassies and did not get visas. Others resorted to the United Nations and other international organizations in order to emigrate and it did not work out."

Hazim said he will remain in Iraq to make sure the word or God remains in the region, while many other church leaders, especially in Mosul, have fled the country or fled to Christian-accepted regions of the country, like Ebril and Dohock. Earlier this month, Canon Andrew White, the Vicar of Baghdad who serves the only Anglican church in Iraq, fled the country after being asked by the Archbishop of Canterbury to do so.

"I will carry the word of God to my parish in Baghdad and Kuwait: Fear not, little flock, for I am with you," Hazim said. "If they persecute you, remember that they persecuted me before you. We will not fear, because this is not the first time in history that this has happened. We will stay, as long as faith remains and as long as our God exists, we will remain present."

Commenting on a recent trip that he took to Israel, Palestine and Iraqi Kurdistan, Archbishop of Oklahoma City Paul Coakley, who is also the chairman of Catholic Relief Services, told Independent Catholic News Service that there are basically no churches left in Mosul and that all of the priests had fled, along with Chaldean Catholic Archbishop of Mosul, Emil Nona, to Ebril.

"When we were in Erbil, we met with Archbishop Amel Nona, Chaldean Catholic Archeparch of Mosul, now exiled in Erbil, who along with his priests and all of the faithful of the archdiocese, have been driven out," Coakley said. "He is, in effect, the archbishop of a Church that no longer exists. They've all been scattered. There are no more Christians in his archdiocese. That's a traumatic, but illustrative situation, of what's happening there, and what can happen, if things don't improve."

Coakley further asserted that the plight of Christians in the Middle East is not just limited to Iraq and Syria, noting that Christians are also fleeing from Israel and Palestine in large numbers.

"Our politics in the U.S. are so pro-Israel, it's very hard to criticize some of the policies, and to point out some of the effects those policies are having in the lives of innocent people, Palestinians in this case, some of whom are Christians," Coakley argued. "But many of the Christians, unfortunately because of those policies, have been driven out of Israel and Palestine."

"So the Christians are really the ones who are kind of suffering between a rock and a hard place," he said about the declining Christian population of the Holy Land. "Like so much of the Middle East, it has dropped precipitously in the last 40 years."