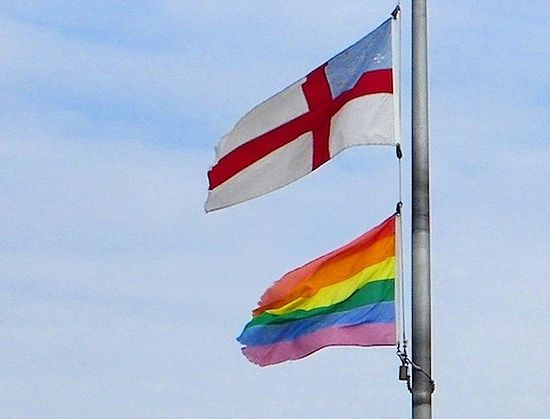 The essay posted on the Orthodox Church in America’s youth ministry page — the one by Boston priest Fr. Robert Arida, calling for a rethink on homosexuality — has really stirred the pot among the relatively small community of American Orthodox. Father Hans Jacobse’s response offers fascinating (to this convert) insight into how liberals within Orthodoxy push their agenda. Excerpt:

Not long ago the Episcopalian [sic] Church faced the dilemma that Arida wants to introduce into the Orthodox Church: Should moral legitimacy be granted to homosexual pairings that was previously reserved only for heterosexual, monogamous marriage?

Episcopalians fought each other for several decades over the question and the traditionalists lost. But why did they lose? How could a position so clearly outlined in the Christian moral tradition be jettisoned so quickly? How could the language of the tradition be so successfully manipulated to overturn what that same tradition disallowed?

To understand how this occurred we have to understand something about the Episcopalian Church. Episcopalian society is a polite society. Polite societies are civil. Those who wanted moral parity for homosexual pairings argued under the rubric of basic human fairness and decency. All discussion was reduced to the personal and Episcopalian traditionalists found it hard to rebut the liberal ideas without violating the rules of polite discourse.

Liberalism and reductionism work hand in hand. The reasoning goes like this: When the personal becomes political the more difficult questions are left unasked because asking them is offensive to homosexuals. These questions reach deep into religious and cultural assumptions, some that reach back over two millennia.

The unasked questions include: How do we address the shift in human anthropology that is at the center of the homosexual question (“I am what I feel”), the cultural ramification of homosexual adoptions, the redefinition of marriage from family to romantic unit, the legal ramifications of sexual orientation as a protected right, and more.

Orthodox culture is different. Unlike the Episcopalians, Orthodox liberals prefer appearances of gravitas over politeness.

Read the whole thing. I’m in no position to say how popular Fr. Arida’s viewpoint is within the Orthodox laity in this country, but I am in a position to say that more than a few Orthodox are shocked to have seen Fr. Arida’s post on an official OCA website — somebody high up had to have approved this — and, after seeing what happened to TEC, are determined to stop this in its tracks. Here’s a tremendous response the OCA priest Fr. Justin Frederick, a former Presbyterian, wrote in the comments underneath the Arida essay. It’s remarkable how the decline of Mainline Protestantism comes up again:

The “new and alien” spirit Fr. Arida alludes to is one he himself insinuates into the Church. “Alien” is the spirit, to be sure, but “new” it is not.

Endless streams of words and arguments such as this were poured out during my years at Princeton Seminary twenty years ago. They were used to overturn the Presbyterian church’s once-clear teaching in matters of human sexuality to open the door to practicing homosexuals openly serving as clergy in the Presbyterian Church USA. While affirming fidelity to Scripture and tradition, those streams of words emphasized the “new work” of the Holy Spirit to change the way Christians interpret the Scriptures and tradition in regard to these matters. How the spirit driving the agenda was to be identified and authenticated as the Holy Spirit of God was never addressed, let alone answered. Here in like manner, the author invokes the Spirit against a past he fears may become an “oppressive tyrant,” though we confess that that Spirit “spoke through the prophets” and by the Holy Fathers gathered in council.

Fr. Arida carefully does not apply his vague generalities to particular issues, though he hints what he thinks those issues are. Those hints suffice to disquiet attentive faithful and clergy.

Among the Presbyterians, some of the most persuasive agents of change were those whose lives contained realities at variance with Christian teaching and proceeded to reinterpret Scripture and Tradition to fit their experience. I clearly remember one prominent activist (a woman who had left her husband and children for female lover and wanted to be ordained) speaking of a couple whose son had come out as homosexual and who reasoned thus: “The Scripture and church teach that homosexual acts are sin. But we know that our son is good. Therefore, the Scripture and the church must be wrong on this point.”

Every Christian faces this choice when his experience in life does not correspond with the teaching of Christ. He may judge himself in the light of Christ, the Scriptures, the Tradition, and the Church and cultivate repentance, and seek to be conformed to Christ, or he may hold his life as the standard by which he interprets the faith and to which he subjects it. The voice of the “Spirit” blowing a gentle wind of change offers an attractive justification for the second course.

Too often the authenticating “Holy Spirit” cited in these arguments is one’s own spirit in thrall to the spirit of the age.

As an Orthodox Christian, a repentant and repenting homosexual, and former Episcopalian this is blather. Fortunately, there are enough former Episcopalians whose antennae can pick this kind of stuff up immediately. What gobbledygook! We’ve heard this stuff before. And yes, this is just another ludicrous attempt to slip homosexuality in through the back door. Talk about a wolf in sheep’s clothing!

It’s actually encouraging to read the strong, intelligently written, and well-crafted pushback the Boston priest has received in the comments. If they are anything to judge by, the Orthodox aren’t going to roll over and allow their church to become Mainline Protestantism with better liturgies. I understand that some OCA priests are meeting with hierarchs today to protest this essay going up on the OCA website, as if the issue of the Church’s fundamental moral teaching were up for debate.

A reader sends in this recommendation of Fr. Arida’s parish (which is also the bishop’s cathedral) from the Facebook page of “Pro-Gay Orthodox Christians”:

Michael Berrigan Clark Gerard, have you been to Holy Trinity (mentioned by Maria McDowell)? This is the OCA cathedral in Boston. So entirely canonical. I am gay… I was married to my husband in a civil ceremony in 2005. When I began attending Holy Trinity later that year I was completely up front with the priest. My husband, Martin, began attending liturgies regularly about two years ago. He was chrismated Holy Saturday earlier this year. Our relationship is not a secret; I have had no negative interactions with either clergy or laity in this parish. Martin and I are not the only gay people in the parish, though after Martin became Orthodox, we are the only Orthodox gay *couple* as far as I know. I don’t think this constitutes “don’t ask don’t tell.” More like “ask or tell whatever you like… we don’t care.” Just saying. Statement on the Comments of Fr. Robert Arida on Homosexuality
It is also contrary to our Tradition to write about matters of faith or piety in ways that are intentionally ambiguous—this is rather the approach of liberal Protestantism.

The Orthodox Trojan Horse
Rod Dreher
In the Orthodox Church in America (OCA), there is awareness of a liberal vs. conservative culture clash between the old-line Orthodox in the Northeast and mid-Atlantic states, where Orthodoxy is historically and numerically stronger, but in decline; and the convert-heavy Orthodoxy in the South and West, which is the only place the OCA is growing. The key issue, as it always is: homosexuality.
Comments

Joshua Wherley9/14/2020 10:34 pm
It is unfortunate that this new heresy of sexual deviancy inclusion is constantly bearing its teeth toward the Orthodox Church in America. But, it is the nature of time that the Church must combat challenges to Holy Orthodoxy. I am relieved to see that Metropolitan Tikhon is reaffirming the Church's stance on the matter, particularly marriage, though I remain bothered by the fact that Fr. Robert remains a priest in the OCA. Comments such as those he has made will not be beneficial to the Church in the long run, except maybe to serve as an example for standing strong in the face of secular challenges to Christianity. Let us make this clear: everyone is welcome in the Orthodox Catholic Church, but not all behaviors and lifestyles are accepted. Recall to mind the message of John the Forerunner: "Repent, for the Kingdom of Heaven is at hand. (Matthew 3:2)"
×