Ustasha graffiti have been painted on the building of the Serbian Orthodox Church (SPC) parish centre in Vinkovc, Croatia. 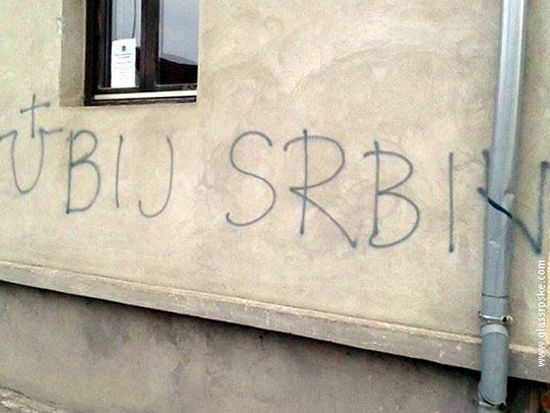 The graffiti featuring messages of hatred against the Serbs, threats and the Ustasha symbols and mottoes were painted on the SPC parish centre in Vinkovci on Sunday, the Osjek diocese has stated.

The Church believes this is an organised attack on the SPC and its priests that has been going on for about 20 days and continues the persecution of the Christian Orthodox faith and everything Serbian in eastern Croatia.

The statement says that “a democratically enlightened Croat” left his feces on the altar of the Church of St Procopius in Rajevo Selo several days ago.

“Just days later, another incident occurred with very familiar messages from recent times, when the exodus of 200,000 Serbs from Croatia was started, along with stamping out the use of the Serbian Cyrillic script and destruction of SPC property,” says the statement. according to a report from Glas Srpske. Croatia: Vandals Desecrate Serbian Orthodox Church Temple In Karlovci
Sacred and other objects were stolen, the inventory scattered and material damage was done, Gornji Karlovac Diocesan said in a statement.