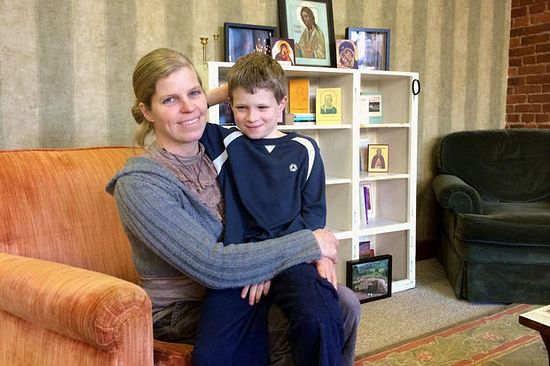 Jodi Hailey found her faith nearly two decades ago in an Orthodox bookstore — a place where she poked and prodded at the complex religion by asking questions and reading voraciously about the Early Church.

Now Hailey, who lives in Forest Grove, wants to bring the same opportunity to her town. She recently opened "The Ancient Church: Orthodox Christian Art, Music and Reading Room" on Pacific Avenue and hopes it can be "an open door" into the faith.

"My husband and I were just thinking, 'how can we make it really accessible to people?'" she said.

Orthodoxy, Hailey said, isn't typically the type of religion that one stumbles into overnight. Her own conversion from her nondenominational Christian roots involved years of learning how to incorporate the faith into every aspect of her day-to-day life.

In 1998, Hailey was dating a Catholic man who would later become her husband. As they grappled with their faiths, she found the answers they were seeking at an Orthodox bookstore, where she asked theological questions and "read and read" about the practices of the Early Church, which looked very different from those of her Christian upbringing.

Hailey, 41, and her husband now belong to St. John the Baptist Greek Orthodox Church in Beaverton — which she says is the closest Orthodox church for her family — though her Ancient Church reading room is not affiliated with the church. She spends three days a week in the space praying, painting, reading and welcoming in any visitors who want to discuss faith or borrow a book from the free lending library.

For Orthodox believers, incense burned during prayer can trigger the sense of smell and symbolize prayers rising to God. Icons — paintings of Christ, the Virgin Mary and the saints — serve as a visual reminder to believers that the saints are echoing their prayers to God.

"Really a lot of the things that seem strange to us as modern, western people are really very old and Jewish," Hailey said. "I wanted people to be able to encounter those things in a way that's not weird."

Eva Walters, a Parish Administrator at Beaverton's St. John the Baptist Greek Orthodox Church, agreed, noting that people of Orthodox faith incorporate "flavors" of the Old Testament and the Jewish faith, and seek to live as the early church would have in the decades between Jesus Christ's life and the recording of the New Testament scriptures.

"If one of the apostles came to visit, they would recognize the (Orthodox) church," Walters said.

Hailey said the Orthodox faith isn't as focused on achieving one-time salvation as it is on becoming closer to God throughout one's life.

"Jesus becoming man was not as much to pay a price as to heal the brokenness of the human person," she said. "Not just that Jesus has made us righteous but that we are truly growing in holiness."

Hailey said she and her husband, who is an engineer at Nike, plan to host workshops, discussions and other events at the Ancient Church reading room throughout the year. These events will be posted on their website.

"I am convinced that people do care, that even in our secular culture, people are searching for God and for answers," Hailey said. "Deep answers to the big questions... I feel like that's what Orthodoxy offers."

On Dec. 6, they will host a St. Nicholas Day celebration as part of Forest Grove's Holiday in the Grove events. A person portraying St. Nicholas will tell his story and read Christmas stories to children.

The reading room is open from 10 a.m. to 1 p.m. Monday, Tuesday and Thursday, and by appointment Friday and Saturday. Hailey and her husband host prayer services on Wednesdays at 7 p.m. A Different Light: Youthful Travelers in Contemporary America
Nun Nectaria (McLees)
Twentieth-century readers knew Kerouac’s On the Road and Jack London’s earlier hobo classic, The Road, but how many of us know what the 21st-century counter-culture is up to, their life-styles and aspirations? We see the tattoos, nose-rings, attitudes, but do we hear the cries of the heart from young people searching for truth? In the following interview Rainbow (Xenia) Lundeen and Seth (John) Haskins, both baptized Orthodox after this conversation, share the by-ways they’ve taken in trying to live out the Gospel in their lives.
Comments

Charles Ritchie11/11/2015 2:41 am
Glad to read of what Jodi & her husband are doing here.(if not on this website,is there another website which lists [in the US of A AND/OR in Canada,at least] all such Orthodox Christian reading rooms & such?)

I believe there is still good here, its just getting harder to find.