Early in December an international assembly of (The Orthodox Mission Network) took place in Piraeus (Greece). Participants from Greece, Russia, Serbia, Bulgaria, Slovakia, Nigeria, Cameroon and Mozambique shared their experience and discussed the today’s challenges of the external mission of Orthodoxy. 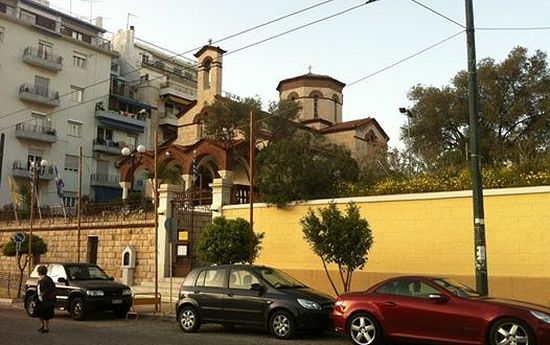 The representatives of the Patriarchate of Alexandria, Metropolitan Alexander of Nigeria, Metropolitan Gregory of Cameroon, and Bishop John of Mozambique gave an account of the spreading of Orthodoxy in their countries. Deacon Georgiy Maximov participated at the assembly as representative of the Synodal Missionary Department of the Russian Orthodox Church. Deacon Georgiy shared the experience of the present-day missionary work of the Russian Church representatives in Asian countries.

The main subject of discussion was the issue of inculturation of the mission – the principles and permissible limits in the attempts to express Orthodoxy, taking into account the realities of culture and mentality of non-Orthodox peoples.

The discussion started with a report by Prof. A.N. Papathanasiou who expressed the opinion that the mission’s problem was its lack of Orthodox African theology and Orthodox African culture at the present time. In his view, missionaries should make a kind of synthesis between the Gospel and a local culture. Metropolitan Alexander stressed that a missionary should not impose his national identity along with preaching of the Gospel, but “should incarnate the Gospel in the body of a local culture and philosophy.” The Greek representatives touched upon the following issues: the possibility new forms of monastic life in Africa; the possibility of using other substances for serving a Liturgy; polygamy in the African society and others.

Deacon Georgiy Maximov accentuated that emergence of Orthodox culture among the peoples of Africa and Asia should be a natural process, coming from the peoples themselves, and should not be imposed artificially by “white” missionaries. Inculturation as inclusion of those elements of the national culture that do not contradict the Gospel is acceptable and advisable, however there cannot be some sort of specifically “African”, or “Asian” theology, because the Truth, preached by the Orthodox Church, is universal. It is also unacceptable to impose your own national and cultural identity on converts because it is alien to them, nor to abandon (under the pretext of inculturation) the basics of our theology, moral and liturgical life of the Orthodox Church. In his turn, Metropolitan Alexander pointed out that it was not a question of change of the Orthodox theology, but of finding ways to express this theology in categories that are close to the mind-sets of these peoples.

Considerable attention was devoted to the practical difficulties that modern Orthodox mission faces in the non-Christian environment. Metropolitan Gregory expressed his anxiety that some Orthodox missionary organizations were relying on the Protestant or Catholic understanding of mission in their work, which has caused problems. Mrs. Wilkis gave a talk on the issues of refugees arriving to Greece from non-Christian countries.

Orthodox books in different languages, prepared and published by the Orthodox Missionary Society of Venerable Serapion of Kozhe Lake (a 16th century Russian saint who once was a Muslim), aroused great interest among the representatives of the Patriarchate of Alexandria. Such publications are also in great demand in Africa. It was agreed to provide a sufficient number of copies of the book, 300 Sayings of the Ascetics of the Orthodox Church, in English for Nigeria and in French for Cameroon, Benin and Togo. Deacon Georgiy also donated eight large icons to the Metropolis (Metropolitan See) of Nigeria for the newly built churches and chapels. Kiptanui Eliud10/28/2020 6:39 pm
I believe in orthodoxy though I am from a Catholic family I hope one day I will join this church I even dream of building one in my village (I think Ethiopian orthodox will unite Africans). I have been teaching my people about this orthodox and Ethiopia but they see me insane but I know Jesus is the light and revelation time is now so the seven shall lead us through.

Sally Iloff7/6/2015 4:38 am
Greece needs our prayers, let pray to Lord Jesus for protection over Greek nation in such a difficult moments!
×