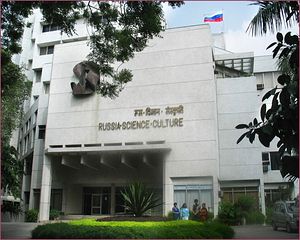 In India BJP government is about to grant permission to the Russian Orthodox Church, which celebrates Christmas on January 7, to provide religious services in the country. The move comes at a time when India is witnessing heated discussions on whether Christmas celebrations on December 25 is a case of “disproportionate Western cultural influence’’, reports The New Indian Express.

The Russian Orthodox Church has sought permission from the government to build a church in the capital to conduct services. Sunday Standard reports:

“The proposal to build a church in Delhi had come up during the UPA government when PM Manmohan Singh had visited Russia. But it never took off as Russian government demolished an International Society for Krishna Consciousness (ISKCON) temple citing protests from local population.

“The request is to build an Orthodox Church either within the premises of Russian Cultural Centre in Delhi or in Goa where there are number of Russian residents. The move gathered momentum after the BJP government came to power. There have been several visits by Russian Orthodox priests in the last six months. ‘The fact that we have got a go-ahead means that all the differences have been sorted out,’’ said the Russian Orthodox Church representative. The Russian Orthodox Church, one of the largest among Eastern Orthodox churches in the world, has followers among more than 70 per cent of Russians. It celebrates Christian festivals, including Christmas, on a different day as it follows the Julian calendar.

“It is understood that the Indian Association in Moscow which is said to be close to the BJP has also played a crucial role in improving the religious ties between both the countries.

“One of the representatives of the Orthodox Russian Church told The Sunday Standard, ‘Since 2002, we have been conducting a mass inside a room in the Russian Embassy. The number of Russian Orthodox believers who attend the mass regularly has increased manifold. We have approached the government to let us build a church here.’

“According to the representative, the BJP government has been ‘quite favorable’ to the request and the proposal is in its final lap. ‘The government has been quite considerate to our request and we are in the process of documenting it,’ said the Russian representative. The proposal is now before the urban development ministry. The ministry is likely to give the nod as the proposal has already got the approval at the bilateral level.

“Sources said that the matter did not come up for discussion during Russian President Vladimir Putin’s visit to New Delhi last week as agreements have already been reached over the issue. The deal between the countries, according to the source, is to allow Russians to build a church here while Russia will allot a plot to have a temple in Russia.”

The Russian representative believes that the Russian Orthodox Church did not face any resistance in Delhi because they are not out to proselytize the local population. “We are here to cater only to the Russian believers here,’’ he said.

According to him, priests are flown down from Russia four times a year for special celebrations like Christmas and Easter. “But once we have a permanent arrangement here, we hope to have a team of permanent priests here,’’ he said.

Russia has one of the biggest embassies in Delhi with second largest number of diplomats. It also has an exclusive space for cultural activities—the Russian Centre of Science and Culture, located at the Ferozeshah Road in central Delhi, which has increased the number of Russians living in that city. Apart from the families of diplomats, the Russian community in Delhi also consists of the many Russian women who have married Indians. Orthodox Easter celebrated in Delhi
More than 200 people took part in the services. In the Steps of the Apostle Thomas
Priest Paul Martin
It takes real courage to become a Christian in India — and it takes courage to remain Christian. Converts are often rejected by family and friends, but they know that to be rejected for love of Christ is cause for rejoicing. One man told me that, when he converted and his home became a center of Christian worship, the villagers threatened him and his family with bodily harm. He remained firm, however, and now years later many in his village are Orthodox. Unfortunately, this does not always happen. And even when it does, acceptance and peace come gradually and often with pain.
Comments