St. Spyridon of Tremithius and the Light of Virtue 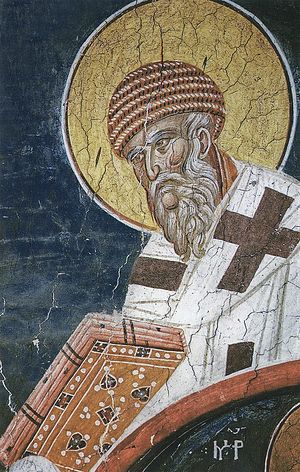 St. Spyridon, Bishop of Tremithius; Balkans. Serbia, Decani. 14th c.
In the Life of St. Spyridon of Tremithius is retold in detail how at the First Ecumenical Council the holy elder entered into a debate with the Greek philosopher who defended the Arian heresy. The arguments made by the holy hierarch were the simplest confession of the essence of faith in the Omnipotent God, One in the Trinity, and in the salvation of the human race accomplished by God the Son. Even so, after his conversation with St. Spyridon the philosopher turned to his friends and said, “Do you hear? While our debate went on by means of argument, I put forth one argument against another and through my skill in argumentation deflected everything presented to me. But when instead of argument proceeding from reason some kind of special power began to proceed from the elder’s lips, any argument became powerless before it, inasmuch as man cannot successfully oppose God. If any of you are able to think as I do, then believe in Christ and follow after this elder along with me, for God Himself spoke through his lips.”

In this brief episode from the Life of St. Spyridon, just as in other stories connected with his righteous service, the question is answered with particular force as to what language of faith Christians should use when addressing a world that has rejected Christ. The saint was a shepherd; he did not have storehouse of theological education that could have withstood the sophistry of the philosophers. Obviously, this language was the language of virtue, accessible to every Christian. In the Sermon on the Mount the Savior clearly points to this, saying, Ye are the light of the world. A city that is set on an hill cannot be hid. Neither do men light a candle, and put it under a bushel, but on a candlestick; and it giveth light unto all that are in the house. Let your light so shine before men, that they may see your good works, and glorify your Father which is in heaven (Mt. 5:14-16).

Nevertheless, in the real life of a Christian, fulfilling the commandment to preach the faith, to transform the world through virtue and moral action is bound up with many difficulties. Thus, the Lord talks about how at the Last Judgment even those who worked miracles in His name—which means healing, instructing, persuading apostates to return—will be cast out. Many will say to me in that day, Lord, Lord, have we not prophesied in thy name? and in thy name have cast out devils? and in thy name done many wonderful works? And then will I profess unto them, I never knew you: depart from me, ye that work iniquity (Mt. 7:22-23). As it turns out, the language of the virtues, in which we are called to converse with the world, is not so simple after all.

Attentive reading of the Gospels as a whole can help resolve the difficulties. In the same Sermon on the Mount, the Lord several times points to the mechanism of the action of virtue in the world: Thy Father which seeth in secret himself shall reward thee openly (Mt. 6: 4, 6, 18). And the Evangelist John the Theologian also reveals the meaning of the Savior’s words on “The light of goods works,” which should shine before people: That was the true Light, which lighteth every man that cometh into the world (Jn. 1:9). Finally, the Savior Himself quite specifically says, I am the light of the world: he that followeth me shall not walk in darkness, but shall have the light of life (Jn. 8:12). 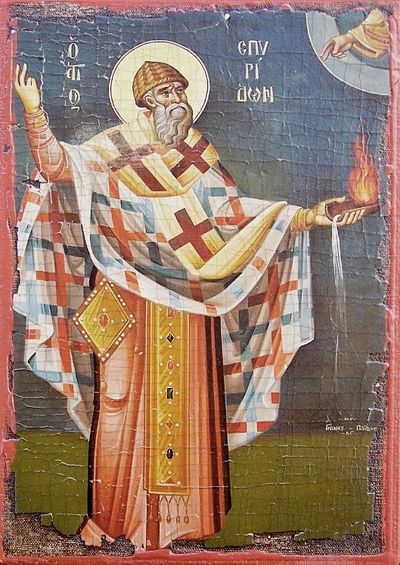 Miracle of St. Spyridon of Tremithius.

As we see, in the Gospels a vector is unambiguously drawn showing the direction we must take and apply all effort towards in order to transform the world around us, to witness to the Truth. This vector is directed not at changing the current reality, or setting things aright in society, or instructing our neighbor. It is directed at Christ alone. Therefore every virtue has power and meaning as long as it has the spirit of Christ, as long as it enables a person to come closer to the Heavens, to acquire poorness of spirit. And to the contrary, if we do something with the aim of changing the world, of teaching those around us, even of bringing them benefit, but forget about Christ, then these same efforts become a threat to our souls and are not likely to help our neighbor. Thus, that light of good deeds by which we strive to change the world becomes a twilight of thoughts about our own significance, about the importance of our own efforts. The Savior warns that, If therefore the light that is in thee be darkness, how great is that darkness! (Mt. 6:23). A the same time, this does not mean that such a disposition is definitely sinful, that all our deeds in one way or another bound up with thoughts about changing the lives of those around us become a stone for the soul that could lead to despair. No, we are talking about something else—about the vector of our thoughts, about their main direction. The rest will of course will be an admixture, and people are not able to set their soul’s disposition properly right away. This all takes time, and absolute purity of intention is hardly possible. Just the same, the concise awareness of what the meaning and cost of our virtues should be should return us to an awareness of the fact that our efforts without Christ are worth nothing.

Every virtue should become a secret language of man’s communication with God, an arterial conduit along which the charge of Christ will be delivered to the lamps of our souls. And the fathers speak of this with perfect clarity when they maintain that the calling of virtue is to cultivate humility in a person; the awareness that all that is done is much less than God’s beneficence, and the world is not improving around us. In this sense the question of how much one or another good deed done according to the Gospel commandments will help our neighbor is a dangerous testimony to the insincerity of our strivings. In turns out that we are doing virtuous works not because we are striving to fulfill the Gospel commandments in our lives, not because we believe in the Gospel’s saving power, but because we look at the Good Tidings of the Savior as good and useful instructions for the building of a moral, just society. This is not life according to faith, but a moral atheism, a dangerous Christianity without Christ.

It is no accident that we see precisely in the Church a simple shepherd, who convinces the sophisticated philosopher. This is testimony to the true power of the language of faith in spirit of Christ. This language is powerful not through its eloquence, not through the magnitude of good deeds affirming its usefulness and correctness. It is powerful through the closeness of the soul of the one speaking to the True Light, To give light to them that sit in darkness and in the shadow of death (Lk. 1:79). How St. Spyridon Helped a Family
Just as he did during his life, out of his great kindness St. Spyridon continues to help people who pray to him. Here is a story sent to the editors of Eskom-Vera from Olga of the town of Syktyvkara. It happened last year. Before then, my husband and I lived with our three children in a crowded two-room apartment. When a fourth little one appeared to the world, it became clear that six people could not live there and we had to look for a larger place.
Comments
×