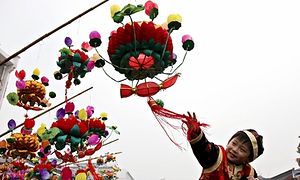 The Spring Festival or Chinese New Year. Christmas is not a traditional festival in officially atheist China but is growing in popularity. Photograph: Li Wenbao/Xinhua Press/Corbis
A university in north-western China has banned Christmas, calling it a “kitsch” foreign celebration unbefitting of the country’s own traditions and making its students watch propaganda films instead, state media said on Thursday.

The state-run Beijing News said the Modern College of North-west University, located in Xi’an, had strung up banners around the campus reading “Strive to be outstanding sons and daughters of China, oppose kitsch western holidays” and “Resist the expansion of western culture”.

A student told the newspaper that they would be punished if they did not attend a mandatory three-hour screening of propaganda films, which other students said included one about Confucius, with teachers standing guard to stop people leaving.

“There’s nothing we can do about it, we can’t escape,” the student was quoted as saying.

An official microblog belonging to one of the university’s Communist party committees posted comments calling for students not to “fawn on foreigners” and pay more attention to China’s holidays, such as the Spring Festival.

“In recent years, more and more Chinese have started to attach importance to western festivals,” it wrote.

“In their eyes, the west is more developed than China, and they think that their holidays are more elegant than ours, even that western festivals are very fashionable and China’s traditional festivals are old fashioned.”

Christmas is not a traditional festival in officially atheist China but is growing in popularity, especially in more metropolitan areas where young people go out to celebrate, give gifts and decorate their homes.

Western culture, particularly in the form of US pop culture, is wildly popular with young, educated Chinese, which occasionally causes discomfort for the generally quite conservative ruling Communist party.

Wenzhou, a city in the wealthy eastern province of Zhejiang, has banned all Christmas activities in schools and kindergartens, the official Xinhua news agency reported. Inspectors would make sure rules were enforced, it added.

The rules are meant to counteract an “obsession” with western holidays at the expense of Chinese ones, an official at the city’s education bureau told Xinhua. Jesus more popular than Mao in China?
A survey by Tea Leaf Nation, a magazine run by researchers studying China's social media trends, found that a search for 'Bible' on Weibo produces over 17 million results.