The Goal of History is the Birth of the Christ 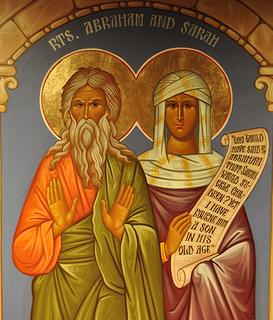 Abraham and Sara.
Orthodox liturgical practice has undergone significant development over its 2000-year history. There were times in Orthodox history in which differing practices could be found occurring simultaneously in various parts of the Byzantine Empire. Over time some of these practices disappeared, some were changed, and some came to predominate over other variations. Christmas is one season that has undergone change through the centuries. The Nativity Fast itself underwent change and development. At one time, monasteries kept Christmas Eve as a feast day, not a strict fast day. By the time of St. Gregory of Palamas (14th Century), in the Orthodox liturgical practice:

Later, however, two additional preparatory Sundays were established, which broadened the original theme to include all the righteous of the Old Dispensation—all those who were well-pleasing to God from Adam to Joseph the Betrothed, including those men and women who had prophesied of the coming of Christ, especially the prophet Daniel and the Three Holy Children (whose feast day falls on December 17/30). Hence, the first Sunday before Christmas (between December 18/31 to December 24/January 6) became known as the ‘Sunday before the Nativity of Christ’ […], while the second Sunday (between December 11/24 to 17/30) took on the name, ‘Sunday of the Holy Forefathers of Christ’ […]—to distinguish them from the Fathers of the ecumenical councils, while the third Sunday before Christmas (between 1 to 10 December) is simply an extension of the second, continuing the remembrance of all those who lived before and under the law, and is marked by the readings of Luke 13:10-17, which speaks of the Crippled Woman who was Healed by Christ on the Sabbath as a ‘daughter of Abraham’. ”[1]

So, St. Matthew begins his Gospel and genealogy with the Patriarch Abraham (Mt. 1:1-25):

The book of the generation of Jesus Christ, the son of David, the son of Abraham. Abraham begat Isaac; and Isaac begat Jacob; and Jacob begat Judas and his brethren; And Judas begat Phares and Zara of Thamar; and Phares begat Esrom; and Esrom begat Aram; And Aram begat Aminadab; and Aminadab begat Naasson; and Naasson begat Salmon; And Salmon begat Booz of Rachab; and Booz begat Obed of Ruth; and Obed begat Jesse; And Jesse begat David the king; and David the king begat Solomon of her that had been the wife of Urias; And Solomon begat Roboam; and Roboam begat Abia; and Abia begat Asa; And Asa begat Josaphat; and Josaphat begat Joram; and Joram begat Ozias; And Ozias begat Joatham; and Joatham begat Achaz; and Achaz begat Ezekias; And Ezekias begat Manasses; and Manasses begat Amon; and Amon begat Josias; And Josias begat Jechonias and his brethren, about the time they were carried away to Babylon: And after they were brought to Babylon, Jechonias begat Salathiel; and Salathiel begat Zorobabel; And Zorobabel begat Abiud; and Abiud begat Eliakim; and Eliakim begat Azor; And Azor begat Sadoc; and Sadoc begat Achim; and Achim begat Eliud; And Eliud begat Eleazar; and Eleazar begat Matthan; and Matthan begat Jacob; And Jacob begat Joseph the husband of Mary, of whom was born Jesus, who is called Christ. So all the generations from Abraham to David are fourteen generations; and from David until the carrying away into Babylon are fourteen generations; and from the carrying away into Babylon unto Christ are fourteen generations. 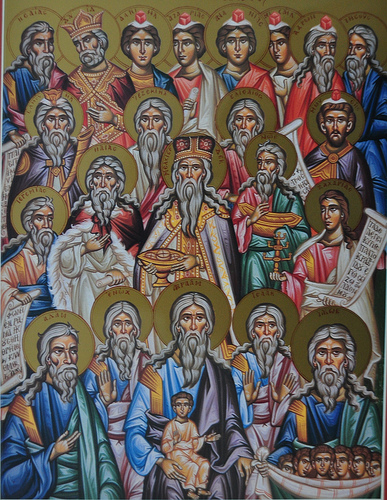 The Holy Ancestors of the Lord.

Now the birth of Jesus Christ was on this wise: When as his mother Mary was espoused to Joseph, before they came together, she was found with child of the Holy Ghost. Then Joseph her husband, being a just man, and not willing to make her a public example, was minded to put her away privily. But while he thought on these things, behold, the angel of the Lord appeared unto him in a dream, saying, Joseph, thou son of David, fear not to take unto thee Mary thy wife: for that which is conceived in her is of the Holy Ghost. And she shall bring forth a son, and thou shalt call his name Jesus: for he shall save his people from their sins. Now all this was done, that it might be fulfilled which was spoken of the Lord by the prophet, saying, Behold, a virgin shall be with child, and shall bring forth a son, and they shall call his name Emmanuel, which being interpreted is, God with us. Then Joseph being raised from sleep did as the angel of the Lord had bidden him, and took unto him his wife: And knew her not till she had brought forth her firstborn son: and he called his name Jesus. 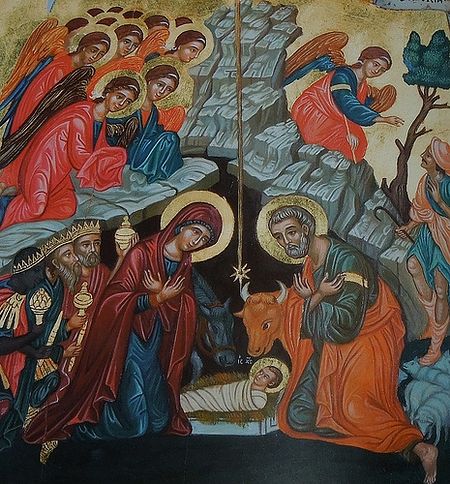 The Incarnation was therefore the product of a long history, a fleshly fruit that had long been ripening on the earth. This was the point of view of Irenaeus of Lyons, who in the second century worked out a real theology of history expressed as a grand succession of covenants (with Adam, Noah, Abraham, Moses, and so on). Whilst humanity thus tested its freedom, an ever-diminishing “remnant” meditated on and refined its expectations until a woman, Mary, by giving her indispensable assent, as last made possible the perfect union of the divine and the human. The history continues today; Life continues to be offered, not imposed. Today also, amidst the titanic undertakings of the modern age, people have desired “to see even before becoming adult the disappearance of every difference between God and humanity.” The movement from the God-man to God-humanity is now possible only because of the patience of the saints, who have slowly established their communion.”[2] 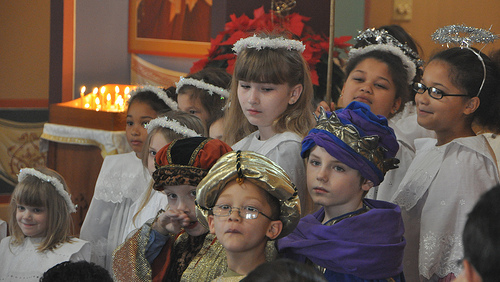 This article first appeared on Fr. Ted’s Blog, and is used here with permission. 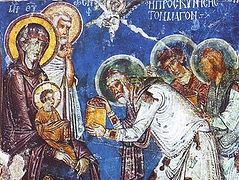 Orthodox Christmas, a Message for Humanity
We would listen attentively as he recounted how Jesus birth was synonymous with humility, compassion, love, understanding and peace in the world and that he came here to baptize mankind in the virtues that had vanished after Adam. Perhaps the deepest spiritual meanings were beyond our comprehension but, in our eyes, my father's words, spoken as they were, brought to life the true magic of the event. The Sunday of the Holy Forefathers Parable of the Great Supper
Fr. Seraphim Holland

The Sunday of the Holy Forefathers Parable of the Great Supper
Fr. Seraphim Holland
We cannot but scratch the surface of what this parable means in the Christian life, but it is here primarily because one cannot celebrate a feast without being morally prepared. This parable tells us sins to avoid, attitudes to avoid. It tells us to wake up! It tells us to be ready. We commemorate the Holy Forefathers today, because they indeed were part of the preparation for Christ. Without them, there would have been no God-man, Jesus Christ, because He was born of a woman, who was of their lineage, and, if this is not exactly so in a physical sense[2], their prophesies and piety prepared the way for the coming of Christ. That was part of God’s plan. 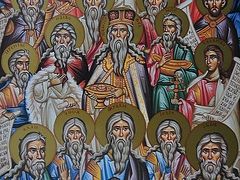 Sermon on the 28th Sunday after Pentecost, Sunday of the Holy Forefathers. On those who were called to the Wedding Feast
Archimdrite Kirill (Pavlov)

Sermon on the 28th Sunday after Pentecost, Sunday of the Holy Forefathers. On those who were called to the Wedding Feast
Archimdrite Kirill (Pavlov)
By the good master of the house in this parable is meant God the Heavenly Father, Who continually calls us to His supper—that is, the supper in the Kingdom of Heaven, which was prepared for us from the creation of the world, inherited through the acceptance of faith in our Redeemer, Christ the Savior, and which will be revealed toward the end of this world.
Comments
×