Patriarch Ilia II: “God is with us. These words are written in the Bible”

On the occasion of the 37th anniversary of his patriarchal enthronment, Catholicos-Patriarch Ilia II of All Georgia together with the Holy Synod members celebrated a festal Liturgy at the Patriarchal Svetitskhoveli Cathedral in the city of Mtskheta, which earlier this year the Georgian Orthodox Church declared as the “Holy City”. 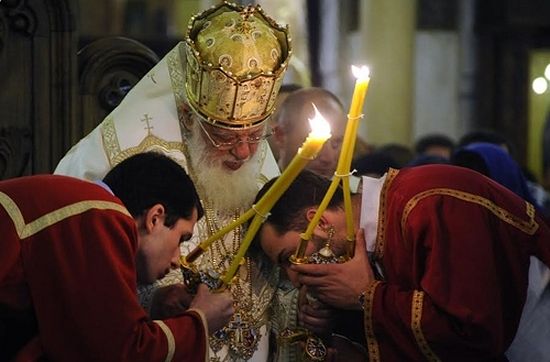 During his sermon Ilia II said the following: “God is with us. These words are written in the Bible. During my enthronement (as Patriarch of Georgia) on December 25, 1977, I had a feeling that God was with us. I sensed and saw how impoverished Georgia and our Church then were. At the same time I felt that the Lord was very close to us and He really was near us. So, over a stretch of 37 years I never was in despair. I always had only hope. Because I saw the mercy of God, saw the grace that has been poured out on Georgia.

The Bible says God sends trials on those whom He truly loves. When the Holy Fathers, who lived in the wilderness, did not have temptations, they grieved and used to say: “We are forsaken by the Lord.” This is the very sense that the Lord has not abandoned and will not abandon us, as He knows the hearts of all men… Our nation, the Georgian people, were granted such a merciful and loving heart from God.

As St. John the Evangelist says, God is love. This is the grace, the reward by way of love that the Lord gave us. And we thank the Lord for His great mercy. It is precisely the love and power of God that has always protected and will protect Georgia from all foes, visible and invisible. Surely, these 37 years were “a sunny night”. It was night, but we did see the Sun; we saw hope and we are grateful to God for this hope.” (The patriarch refers to his ministry as to “a sunny night”: he served during difficult times for Georgia, but the Light of Christ was like the sun in the night.)

“The mercy of God, His grace has kept and will keep us in all times. Let us ask the Lord so that through intercession of the Mother of God He might grant us grace, love and joy—and may they ever fill Georgia. Amen. May the Lord bless, gladden and strengthen you.”

Metropolitan David and the Georgian prime minister, who were present at the Liturgy, addressed Patriarch Ilia II on behalf of the clergy and people with words of gratitude. The deeds of the Patriarch for the good of the Church and the whole of Georgia were enumerated with profound gratitude. Patriarch Ilia of Georgia: don’t evict people from houses because of the debt

Patriarch Ilia of Georgia: don’t evict people from houses because of the debt
The Catholicos – Patriarch Ilia II of All Georgia asked the country’s commercial banks to not evict from their houses those people, who could not pay their mortgage loans, at least during the winter season. Georgian Patriarch: We Give Our Children Everything But Don’t Think About Teaching The True Religion

Georgian Patriarch: We Give Our Children Everything But Don’t Think About Teaching The True Religion
In a recent sermon preached at Holy Trinity Cathedral in Tbilisi, His Holiness Ilia II, Catholicos-Patriarch of All Georgia, emphasized that only spiritual renewal will bring about societal change for the better. Problems such as domestic violence and juvenile delinquency represent a spiritual crisis in family life.

Ilia II: “May God grant that everybody should see in his or her neighbor a brother and not an enemy”

Ilia II: “May God grant that everybody should see in his or her neighbor a brother and not an enemy”
His Holiness informed his flock that a street in Tbilisi where St. Gabriel’s house is situated would be named after him. Also a parcel of land nearby has been allotted where a Church of Venerable Gabriel will be built. Patriarch Ilia II asks media to stop traumatizing people with crime news
At the Holy Trinity Cathedral Catholicos-Patriarch Ilia II of All Georgia addressed his flock with a Sunday sermon, singling out the journalists and “the establishment”, asking them to stop spreading death propaganda.
Comments
×