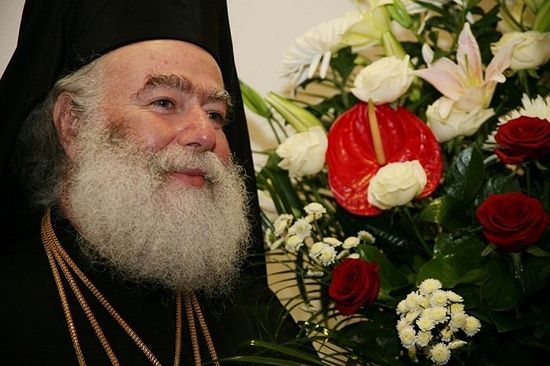 The Greek Orthodox Patriarchate of Alexandria and All Africa intends to implement a program to help the fight against AIDS in South Africa, according to Patriarch Theodoros’ statement during his meeting with the country’s president, Jacob Zuma.

The two men met at the presidential residence in Pretoria and Patriarch Theodoros promised that the patriarchate would contribute significantly in providing vulnerable groups of people with clean drinking water.

President Zuma welcomed the patriarch of Alexandria and his entourage and praised the role and presence of Hellenism in South African society over the years, referring to the well-known human rights lawyer who campaigned against apartheid in South Africa, George Bizos.

Meanwhile, the Patriarch of Alexandria and all Africa stressed that Greeks and Cypriots in South Africa are actively contributing to the country’s progress and prosperity.

Furthermore, the South African Minister in the Presidency, Jeff Radebe, and other members of the country’s government, as well as the Metropolitan of Johannesburg and Pretoria, Damaskinos, and the ambassadors of Greece and Egypt to South Africa were also present during the important meeting.

Patriarch Theodoros awarded President Zuma with the Grand Cross of the St. Mark Order of the Lion and offered him a cross wishing that the president would always carry it with him. He then invited him to visit the patriarchate headquarters in Alexandria, Egypt, an invitation that President Zuma gladly accepted. Orthodoxy in South Africa before and after Apartheid Assembly of Orthodox missionaries from various countries takes place in Greece
Early in December an international assembly of (The Orthodox Mission Network) took place in Piraeus (Greece). Participants from Greece, Russia, Serbia, Bulgaria, Slovakia, Nigeria, Cameroon and Mozambique shared their experience and discussed the today’s challenges of the external mission of Orthodoxy. Metropolitan Makarios of Kenya visits church under construction at the foot of Kilimanjaro
The hierarch thanked all those laboring for the mission in the region, particularly priests and alumni of the Patriarchal Academy. Addressing himself to the flock consisting of the Masai (a pastoral people living in Kenya and Tanzania) and Kikuyu tribes’ representatives, Metropolitan Makarios stressed that the Gospel of Jesus Christ is addressed to everybody without distinction as to tribe or language.