In Georgia many believers are rejoicing at the miracles occurring from the myrrh-streaming icon of Blessed Gabriel, “the Fool-for-Christ”, that belongs to a family in Tbilisi. Numerous people have been healed from this icon, as relates the “Postscript” program on the Rustavi 2 TV channel. 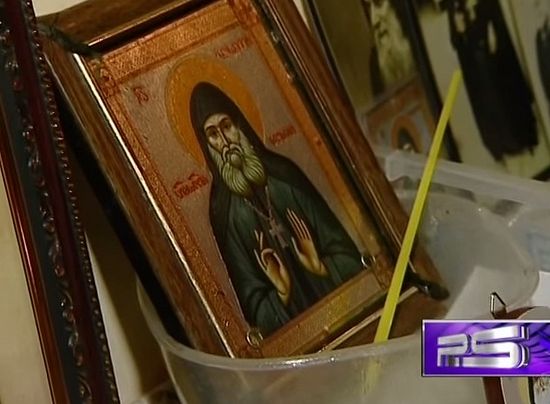 The icon of St. Gabriel First began streaming myrrh seven months ago. It was shown to Catholicos-Patriarch Ilia II who confirmed this.

Over the last two months, twelve more icons and photographs of elder Gabriel began shedding myrrh in the family which possesses this relic.

And in January another, a larger Icon of Father Gabriel began shedding myrrh abundantly.

Maka, the keeper of this icon, relates: “Fr. Gabriel appeared to me, looking as he is seen on icons, saying: “Has anyone already told you anything?” I answered: “No”. Then he replied: “Then I will come once more.” The next morning, as I went out of my bedroom, I saw that all other Icons of St. Gabriel were covered with myrrh. So I realized why Fr. Gabriel had told me he would return again: his return was through the shedding of myrrh.”

St. Gabriel said to her: “I have chosen you because the grace of God is upon you. And the people whom you will anoint with this myrrh will be healed.” The Church representatives blessed Maka to anoint those flocking to venerate the holy icon with this myrrh.

Miraculous healings are occurring at this icon. The news of this is being spread throughout and crowds of faithful are flocking to the family to venerate the relic and a special time is allotted for them.

Among them there are Lika Alimbarashvili and Irina Maisuradze. After praying before the holy Icon of Venerable Gabriel and anointing they came back home.

Upon their return the myrrh on the girl’s forehead became red. They made photographs of all this. But the miracles did not end with this. An small case with earth from the elder Gabriel’s grave, attached near the girl’s heart, began shedding blood as well.

For two days a liquid, resembling blood, poured from the amulet with earth, and for another two days, some colorless liquid. The girl formerly suffered much from a heart disease. With her mother they went to venerate the Relics of St. Gabriel and during that visit the saint himself appeared to the mother, blessed her and said that she should not worry about anything and that everything would be well with them. The clothes on which the liquid had poured from the amulet with earth, was sent for a scientific investigation and expert examination. The examination results will be announced.

It has also been reported that three dumb people began to speak after anointing with the myrrh.

An avenue now named after great Georgian elder Gabriel (Urgebadze)
It was the holy archimandrite’s sister and 3,000 parishioners of Georgian churches together with her who appealed to the Georgian Patriarchate and the municipal authority with the request to rename Cholokashvili Avenue to St. Gabriel Avenue.

Editor7/27/2018 11:30 pm
Marie: There are many pictures of him on the internet, but you can also write to the St. Herman of Alaska Monastery and ask them to send you their issue of the periodical "Orthodox Word" that features St. Gabriel. Here is their website: https://www.sainthermanmonastery.com/.

Marie Montante7/27/2018 11:25 pm
Ifeel like I know this wonderful saint He keeps popping up on my cell phone. I would like to get a picture of him and some of his writings.how can i find out how.
×