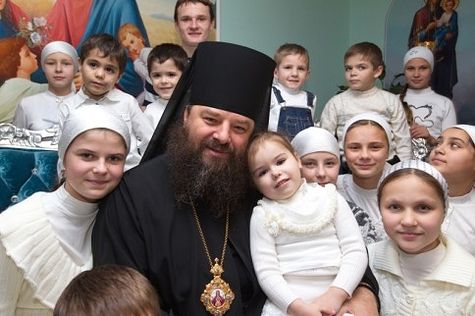 As the brutish and Satanic NATO aggression against the peoples of the Ukraine continues, the heroic Bishop Longin (Zhara) of the Ukrainian Orthodox Church has called on the people not to surrender their children as cannon fodder for the oligarch junta in Kiev. Bishop Longin is famous as the founder of the Monastery of Bachensk, where hundreds of orphans are looked after, 200 of whom have been adopted personally by this energetic bishop. He has said:

‘I ask of you just one thing: to unite and not surrender your children to death. Our Orthodox Faith does not allow us to kill one another. For the sake of political interests, for the sake of those who are defending their businesses and who are defending their high positions, they want to kill our people who live at peace with faith in God. My kith and kin, you do not have the right to shoot and kill. God gives life and God takes away. The rulers of the Ukraine have said: ‘The Orthodox Faith is the greatest enemy of the Ukraine’. This is what strangers ordered them to say and in their blindness those strangers cannot reconcile themselves with the truth.

How can we pick up a gun and shoot at the image of God? Like us, he too has a mother, a wife, children. Why are they forcing us to fight against our will? …There are already thousands and tens of thousands of dead, but they only speak of hundreds. I do not give you my blessing to go to war. We call you to peace. About 10,000 soldiers have died and their mothers do not even know that they are dead. I am not being political, it is just painful for me because this is not a war against an enemy, this is a war among our own.

…The United States wants to see Orthodox killing each other, shooting each other, while they eat, drink and make merry, rejoicing at the bloodshed in our holy land…Europe, of which the Holy Fathers said: ‘Do not worship the beast’…Now they are standing to one side and rejoicing at our spilled Orthodox blood.

We all feel that we are standing on the brink of a Third World War. That is why I am calling on you: Repent! And we shall not surrender our children to death!

At the holy Liturgy I will never commemorate the cursed leaders of our State – those unbelievers who do not have the fear of God, who sit in their armchairs and point and order: ‘Kill!’ I pray for just one thing: If Thou still canst, O Lord, enlighten them for they are overwhelmed by the darkness and filled with poison. They no longer need anything except the bloodshed which brings them satisfaction. Satanists! They are servants of Satan! If they do not stop themselves, then God will stop them and then there will be many sorrows!’ Donbass: community of a destroyed church celebrates its patronal feast

Donbass: community of a destroyed church celebrates its patronal feast
On January 2, 2015, the patronal feast was celebrated by the community of the destroyed Church of St. John of Kronstadt in Kirovskoye – a town on which shells had been fired every day until the last truce was concluded. Belgian Orthodox lend Donbass a helping hand
Orthodox Christians of Liege have donated one million rubles as financial assistance to Donbass. This money will be used for salaries of teachers and preschool education workers. Marcel C7/18/2021 12:18 am
This is a Romanian arhimadrit his name is Jar near the Romania border in Ucraine (south old Romanian territory of Bucovina) he have nothing to do with Dombas and yes he have a orphanage.

Susan2/5/2015 6:53 pm
Fr. Nikolai:
How can you call a straight translation of what the bishop said "propaganda"? Or perhaps you are calling the bishop, who cares enough about his people to personally adopt 200 orphans and take care of many more, a "propagandist"? And what makes you say that he excuses those fighting in the east? It is just that he lives in the western part of the Ukraine, and is addressing his own flock. You are espousing the very divisiveness that he condemns. Would you send your children to such a war? I pray that people would set aside their ethnic affiliations and put a stop to this terrible fratricidal war.

Fr. Nikolai2/2/2015 11:38 pm
Simple propaganda. To be expected from "Orthodox England" They constantly misinterpret and lie. Nothing new here.

Does the Above Bishop reject the Orthodox Church teaching to pray for the government rulers? Does he give his blessing to Satanic invaders who rape and kill in the Donbas? If he doesn't give a blessing for Ukrainians to defend their country, he should be crying out against the "rebels" as well. Anything else is hypocritical.

You are correct in your assessment of the situation in Ukraine. We can only pray that things will change there for the better, according to Gods will. Know that we support you in your attempts to rid your land of the scourge that has come upon it. We in the United States are subjected to the same propaganda as you; it is controlled and propagated by those in this country that are evil. We must stand together against this and banish it forever. Our children deserve no less.