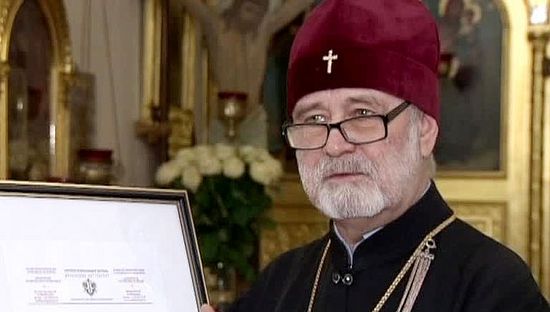 Orthodox Christians of Liege have donated one million rubles as financial assistance to Donbass. This money will be used for salaries of teachers and preschool education workers, reports Vesti.

The decision was made by the Diocese of Brussels and Belgium of the Russian Orthodox Church despite the fact that the diocese itself is in need of money: next year construction of an Orthodox church in honor of the 70th anniversary of victory World War II is to begin in Liege.

Archbishop Simon of Brussels and Belgium related: “Fundraising was started in the parish of Liege where next year a church marking the 70th anniversary of the victory over fascism will be built. Although the people themselves presently need financial resources for construction of the church, they have put forward the initiative of collecting money for teachers, of helping them. Other representatives of my churches, parishioners, the clergy have joined them, because that is the pain we are sharing together”. Archbishop Mitrofan of Horlivka and Sloviansk: “There is much prevarication in this war”
There are many things in this war that, should the Church touch them, It will have to bear this burden. The Church can and should give spiritual guidance to the people who take up arms, to prevent them from using them wantonly, and that they might remember that they are Christians and have a conscience. A funeral service performed over teenagers, killed during shelling of Donetsk

At least 11 killed, 40 injured in shelling in Donetsk, E. Ukraine, school hit
“The particular cynicism of this shelling is the very fact that today was the children’s first day at school. And on this day, artillery directly targets them. These are blatant, intolerable things,” the ministry’s human rights ombudsman Konstantin Dolgov said.
Comments
×