The Syrian city of Deir ez-Zor which for many centuries was the haven for Christians of north-eastern Syria today has lost its Christian name—now its occupants-islamists call it “Wilayat ul-Hayr”, reports the Calam1 portal. 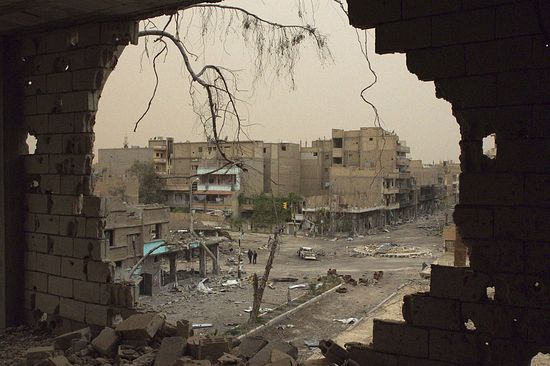 Thus, islamists, members of “The Islamic State” terrorist organization have decided to abolish the very name of the city which since the 8th century has had the word “deir”, that is, “monastery”, as part of its name that refers to Christianity and the Christian heritage of Syria.

However, the new place name, “Wilayat ul-Hayr” (Arabic: “Wilayat of good”) is intended to remind the residents of the new order of life of religious minorities on the territory occupied by ISIS.

According to the eyewitnesses’ evidence, early in 2012 many residents of Deir ez-Zor rose against the Syrian ruling regime which enabled the “Free Syrian Army” militants to take some positions in the city. But already in 2013-2014, following the consolidation of Jabhat al-Nusra and ISIS both politically and militarily some Christians of the city resolved to leave their homes.

One of them, 45-year-old opposition member named Ilia, explained his decision to the journalists in this way: “I knew that after the establishment of the blockade of Deir ez-Zor by the regime our situation would become terrible; but when the islamists who were supposed to be fighting for us appeared, I realized that everything would be even more terrible. Then we had to flee”.

The fears of Ilia and those who shared his views were justified – in July 2014 the ISIS militants entered the city. Since that time the “caliphate” of Iraq has become the space united with invasions of the islamists in North Syria. For Christians of Rakka and Deir ez-Zor this meant the following: introduction of laws which discriminate religious minorities. Apart from the dress code, Jews and Christians of the “Wilayat” are forced to observe other rules of the islamists: specifically, they (Jews and Christians) are not allowed to evade the religious tax, or “jizya”, as well as maintain churches and monasteries. “Lawbreakers” are punished by “the State” with death.

According to the evidence of Doctor Jurjus, a Christian who has recently fled from the militants in Rakka, all the cities which are currently under control of the takfirists are in the same catastrophic situation.

“I recall faces of the people who were around me – it is true that they were nostalgic for the past, realizing its value and freedom. Terror and violence, devastation and death are reigning in my city – it will never be “the gem of the Euphrates” any more… The terrorists’ power is the stigma that marks the whole opposition movement; this opposition is to blame as many patriots had to leave their home country, and probably forever,” he said in conclusion. War's many victims
If you know anything about the laws of conflict, you probably know that destroying or stealing the cultural and spiritual heritage of an enemy or an occupied land can be a war crime, especially if it's done in a systematic way. ISIS—Already 300 kilometres from the European Mediterranean
According to the media reports, ISIS is continuing its expansion in the west of the Libyan coast: lately the militants have occupied the town of Derna (Darnah) – a seaport which once attracted tourists by its mountain scenery and mild climate. ISIL crucifies eight rival fighters, says monitoring group
The Syrian Observatory for Human Rights, which relies on contacts on the ground in Syria, said the men were crucified on Saturday in Aleppo province. It added that their corpses were still on view.
Comments
×