Orthodox Christians protest against attacks on churches in Kiev 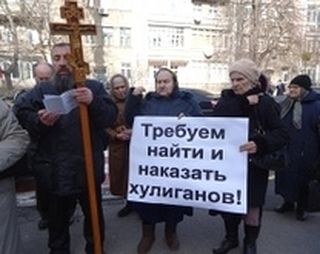 Representatives of the Orthodox community have held a “prayer standing” protest action near the building of the Ukraine’s Ministry for Internal Affairs in Kiev, reports Interfax-Religion.

They have asked the law-enforcement agencies’ officers to protect the shrines and have prayed to God so that He might bring the arsonists of churches to their senses.

“By their banners the Orthodox activists have asked the law-enforcement agencies’ officers why the criminals who with impunity are regularly attacking churches of the canonical Ukrainian Orthodox Church in Kiev have not yet been brought to trial,” said Yuri Yegorov, leader of the “Orthodox choice” (“Pravoslavny vybor”) movement.

He noted that the latest incidents were arsons of two Orthodox churches in the Ukrainian capital: the Church of the Icon of the Mother of God, “Joy of All Who Sorrow” in the Babi Yar Reserve as well as the Church of Holy Martyr Tryphon in the Desnyansky district.

“Unfortunately, at the present time the police are demoralized, while sheer permissiveness and impunity have been continually reigning in the Ukrainian capital already for a year,” Yu. Yegorov noted.