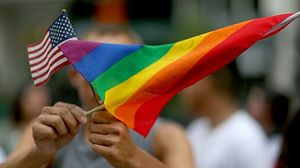 Every single major news outlet in the U.S. is covering this historic event.

The U.S. government’s concern is not only the more than 75 countries that criminalize homosexual activity, but also to target nations trying to resist the onslaught of homosexual groups from United States and Europe, especially because of several pro-family laws that have taken effect around the world in recent years. The Washington Post gave some examples, “Russian President Vladimir Putin signed legislation in 2013 banning ‘homosexual propaganda,’ and Nigeria banned same-sex marriage and restricted homosexual behavior, including public displays of affection between gays.”

Putin was named by The Advocate, the largest homosexual magazine in the U.S., as the most prominent opponent of the gay agenda.

According to “The Advocate,” the idea of appointing a special envoy for LGBT issues was championed by several groups, including the American Jewish World Service (AJWS) and the Human Rights Campaign (HRC), the largest homosexualist group in the U.S., whose co-founder, Terrance Patrick Bean, was arrested for homosexual assault on a child last year.

According to its own website, AJWS is the fourth largest funder of the gay agenda worldwide. Since 2005, AJWS has invested nearly $9.5 million in global LGBT rights. Last year, AJWS provided $2.97 million to 47 organizations promoting the gay agenda in 14 countries.

If you wonder how a leftist group promoting the gay agenda is Jewish, remember that the leftist U.S. president promoting the same agenda is allegedly Protestant.
According to the homosexual magazine “Washington Blade,” HRC president Chad Griffin applauded the State Department.

“At a moment when many LGBT people around the world are facing persecution and daily violence, this unprecedented appointment shows a historic commitment to the principle that LGBT rights are human rights,” he said. “President Obama and Secretary Kerry have shown tremendous leadership in championing the rights of LGBT people abroad. Now, working closely with this new envoy, we’ve got to work harder than ever to create new allies, push back on human rights violators, and support the brave leaders and organizations that fight for LGBT rights around the world.”

The appointment of an openly homosexual diplomat as a LGBT envoy sends a message that the United States will remain on the forefront and leadership of promoting the gay agenda around the world. It shows also its determination of pushing back Russia, Nigeria and other nations.
Now the United States will make the world freer to adherents of homosexual acts and ideology and less free for Christians and others who do not accept homosexual depravity, including Russia and Nigeria that are trying to protect their children from homosexual propaganda.

Every single homosexual activist around the world is benefited by the U.S. move.

Every single practicing Christian is threatened by it.

I wonder what will happen to Christians like me. My book “O Movimento Homossexual” (The Homosexual Movement), published originally by the Brazilian branch of Bethany House Publishers in 1998, made Brazilian gay groups furious because I exposed that they were bringing to Brazil the gay ideology from America. In fact, many of their militants had been trained and funded in America. My exposé brought threats against me. But now, with the U.S. government strongly siding with international homosexual activists, they will receive more training and funding to advance and threaten, and Christians like me run the risk of being labeled “human rights violator” and “criminals.”

America, which was founded by men who believed in the Bible, is determined to challenge their Christian convictions, including their belief that God destroyed Sodom because of its homosexual sins. George Washington, for example, saw the homosexual behavior as abominable and detestable. But the current America, a superpower, thinks that she is greater than Washington and the God who punished the homosexual sin of Sodom. And a greater Republican presence in the Senate and House of Representatives has not increased opposition to this national and international threat.

Seeing the relentless advance of the gay agenda in the U.S., several American evangelical leaders are investing in the spread of a resistance in other nations. HRC issued a report entitled “Export of Hate,” denouncing American Christian leaders who, contrary to the official U.S. foreign policy promoting the gay agenda around the world, are promoting a global resistance to this agenda.

Of course, when the Evil itself calls it “Export of Hate” is exactly the contrary. Real “Export of Hate” — hate for family, children and Christians — is the U.S. government funding homosexual activism around the world.

I miss the days when the biggest U.S. export was the Gospel of Jesus Christ, with the blessing of the U.S. government. Today, it is sodomy…

The number 1 enemy in the HRC report is Rev. Scott Lively, author of “Pink Swastika,” who has distinguished himself by inspiring Russians to take a solid stand against the Western homosexualist policies. The report also points that in addition to Russia, he also travels to Uganda, Eastern Europe and England.

Lively is the author of an “An Open Letter To President Vladimir Putin,” of 2013, where he says:
“The homosexualist movement is not simply seeking social tolerance, or acceptance, but political power and control. They want the power to stamp out all disapproval of homosexuality in your society and to compel every citizen (especially the youth) to embrace the view that homosexual conduct is good and normal. They ask for a place at the table, but once they have one all the social ideals they exploited to get there, such as social tolerance, freedom of speech, and respect for cultural diversity, are discarded. In place of those ideals is inserted a new backwards and upside-down morality and world-view that condemns all disapproval of homosexuality as a new fictionalized form of bigotry. I have termed this phenomenon ‘Homo-fascism’ and defined it as a form of extreme left-wing, regressive radicalism which seeks to establish rigid authoritarian controls over all public discourse and government policies regarding sexual norms and proprieties, and to enact punitive measures against conscientious objectors that would punish or suppress all disapproval of homosexuality and related sexual behaviors (that would of course even though they deny it, quickly include a sexual indoctrination and exploitation of children). In the coming months and years Russia and Her people will be increasingly portrayed by emotion laden and abusive hyperbole as bigoted haters, intent on exterminating homosexuals. Indeed, the propaganda campaign on that theme has already been initiated, with video footage purporting to show Russian neo-Nazis beating homosexuals now being circulated on the Internet, along with the false implication that this is the intent of your policy.”

Other American evangelical leaders mentioned in the HRC report also travel to other nations to help them in the global resistance to the gay agenda intensely promoted by the U.S. government.

Benjamin Chung2/26/2015 8:32 pm
The Homosexual Agenda is now extremely radical and invasive in the United States especially here in California where I live. They have been attacking Judeo-christian values to which I swear allegiance according to the teaching of the Christian Bible. Their attacks are gaining even more momentum. Come Lord Jesus and put an end to the Babylonian corruption system and its immoralities! "As it was in the days of Noah, so shall it be at the coming of the Son of Man."
×