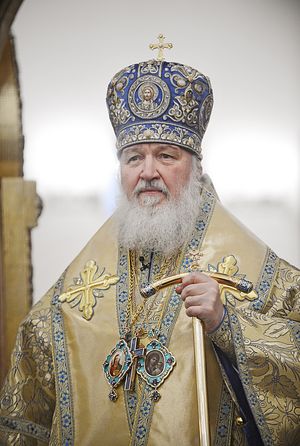 The leader of the Russian Orthodox Church has warned society on the dangers of the "international campaign" behind same-sex marriage, and insisted that the traditional family structure is needed for the survival of humankind.

"Preservation of marriage as a union between a man and a woman based on love and mutual understanding and birth of beloved children are a precondition for survival of humankind," Patriarch of Moscow and All Russia Kirill said in a statement on Tuesday following a meeting at the upper house of the Russian parliament, ITAR-TASS News Agency said of reports in the world's largest country.

Kirill added that the church is also concerned about marital infidelity and the "irresponsibility in relations between men and women," in his message directed toward "all sober-minded people of Russia and other countries."

The Orthodox head said that he believes preserving traditional marriage is more of a moral issue than a religious one, and so a secular state should prohibit same-sex marriages based on moral reasoning.

This isn't the first time Kirill has warned Russian society on the dangers of gay marriage. He has called it an "apocalyptic symptom" that should be combated.

"This is a very dangerous apocalyptic symptom, and we must do everything in our powers to ensure that sin is never sanctioned in Russia by state law, because that would mean that the nation has embarked on a path of self-destruction," Kirill said in July 2013. "We face enormous temptations when countries start approving sin and codifying it into law in order to justify it."

Sixteen countries worldwide have legalized same-sex marriage, as well as Mexico and the U.S. on a state-by-state basis.

Russia, the host country of the upcoming Winter Olympics in Sochi, has garnered international attention over a law signed by President Vladimir Putin last year which makes it illegal for anyone to spread information about the lesbian, gay, bisexual and transgender community to minors.

The anti-gay propaganda law has been condemned by gay rights activists, though Putin has said that LGBT people can feel "safe and free" at the 2014 games but need to "leave our children in peace."

Sochi's mayor, Anatoly Pakhomov, recently made similar remarks, noting that the lifestyle of homosexual people is "their business." He also insisted that there are no gay people in his city – an observation which has been challenged by Russian opposition leader and Putin critic Boris Nemtsov who said there are a number of gay bars in the Olympics-hosting city. Old foes Russia and Poland unite against EU 'ideology'
Leaders of the Polish Catholic and Russian Orthodox Churches have issued an unprecedented joint plea to European Christians to defend their traditional values and Christian roots.

10 of 13 Newest EU States Reject 'Gay Marriage'
Since 2004, 13 nations have joined the European Union and 10 of them either prohibit or do not recognize homosexual marriage, while the remaining three allow some legal "partnership" recognitions but not on the same level as heterosexual marriage.