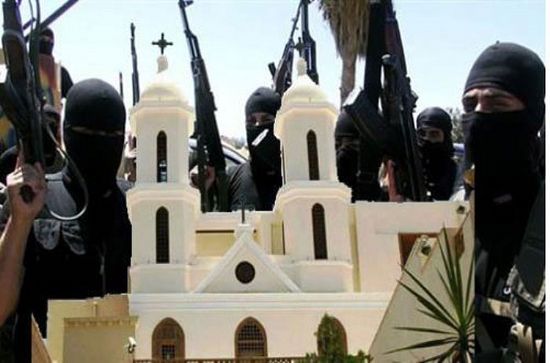 Hussein bin Mahmoud, a jurist of Sharia law for the Islamic State, said in an article published on February 17 and appearing in various jihadi websites that all Christian churches in Cairo must be demolished.

Titled the “Ruling on Egypt’s Christians,” the article, written like a fatwa, asserts that

The ruling concerning the churches that are in Cairo is that they be destroyed, according to the consensus of the righteous forefathers [Salaf], because they are new under Islam, and Cairo is a new city whose original inhabitants were Muslim; there were no churches in it previously.

As for churches in Upper Egypt, which may have been in existence before the Islamic conquest of Egypt, these may remain but may never be renovated or fixed.

The Islamic state cleric cited medieval jurist Ibn Taymiyya (d. 1328), some of whose fatwas deal with Islam’s views on churches which are described as “worse than bars and brothels.” And in fact, Taymiyya and many other jurists (such as Ibn Qayyim) called for the destruction of all churches built after the conquests (see Crucified Again, pgs. 35-36 for a review of the relevant fatwas/teachings). Pronouncing of the word “Christmas” is punishable by death on the territories occupied by ISIS
The outrages of radical Islamists on Iraqi and Syrian territory have not only deprived Christians who live under the yoke of the takfirists of the joy of Christmas, but also alarmed neighboring regions that for the moment are free of the terrorists.