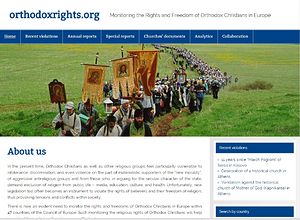 The Center for Monitoring Orthodox Christians' Rights and Liberties in Europe has launched a website with support from the Moscow Patriarchate's representative office in the Council of Europe.

The English-language website, Orthodoxrights.org, will carry information about violations of Orthodox Christians' rights and liberties in Europe, as well a special reports, according to the press service of the Russian Patriarchate's representative office in the Council of Europe.

It said numerous abuses of the rights of Orthodox Christians of the Ukrainian Orthodox Church were reported in 2014, which were documented in a special report on Ukraine for 2014, posted on the website.

The results of the work to be done will be provided to the Council of Europe's agencies and to the European public, which is expected to broaden and specify the agenda of the Orthodox churches' dialogue with European international organizations and to supply facts to be used in various public discussions, the posting says.

"I think such work should have been started a long ago. I am not familiar with any other initiatives to regularly monitor the observance of Orthodox Christians' rights and liberties in Europe. At the same time, there are many projects to monitor religious freedom in Europe and in the world as a whole. But the situation with Orthodox Christians' rights is poorly covered in such reports," Hegumen Philip (Ryabykh), the Russian Orthodox Church's representative to the Council of Europe, said, according to the press service.

Aggressiveness, discrimination and acts of violence against the Orthodox Christians in connection with their faith, have been growing in everyday life, he said. "This is coming not only from representatives of the state, but increasingly from political, religious and social groups, and from individuals engaged in extremist activities," the priest said. PACE recognizes facts of discrimination against Christians in Europe

PACE recognizes facts of discrimination against Christians in Europe
On 29 January 2015, Resolution 2036 (2015) tackling intolerance and discrimination in Europe was adopted at the winter session of the Parliamentary Assembly of the Council of Europe.