An amazing event has been witnessed just a few kilometers from the town of Trikala, beneath the holy mountains near the Meteora; the wood of an icon of the Archangel Michael, painted five years ago by iconographer Fr. Panagiotis Pevkis, is giving out drops of fragrant oil which, miraculously, have not damaged the icon. 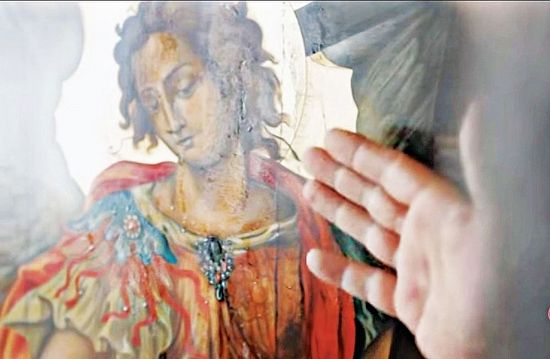 The priest-icon painter was seized by fear, seeing these drops for the first time. At once he started praying to God. At first he did not tell anybody about the miracle fearing that people might wrongly interpret the “message” of God, as he says.

“The holy image of the Archangel Michael that I painted is an exact copy of the icon of the Chrisolor school. The work was completed five years ago. I was astounded when at some moment I saw that myrrh began flowing from the wood of the icon. Making the sign of the cross, I took a little piece of cotton wool and wiped the drops, fearing that they would damage the image. Then I did not think of anything special. But the oily liquid went on seeping from the icon, producing a fragrance similar to that of lamp oil. The most amazing thing is that the myrrh does not do any harm to the icon paint,” Fr. Panagiotis related in his interview with an Orthodox newspaper.

As the icon painter explains, the drops appear in different places on the icon. “Sometimes myrrh emanates on the image of the Archangel Michael, sometimes on his arms, and each time in different spots. I am unable to explain this mysterious miracle, but I consider it to be a sign of the Lord. I asked one chemist to explain this phenomenon but he failed to give any adequate explanation,” he recounts.

Fr. Panagiotis has added that the wood used for painting of this icon is 200 years old.

“This is a specially dried plane (sycamore) tree which cannot contain resin, like pine, for example. So I fail to understand how it can give out oil,” noted Fr. Panagiotis.

Should the myrrh keep exuding from the icon in the following years, the icon painter will appeal to the specialists for consultation. The priest calls this phenomenon a sign, not a mere miracle. He believes that through this sign the Lord wants to strengthen the faith of people. The Archangel Michael Operated On Me!
Archimandrite Daniel Sapikas
Through a cloud I watched and listened to what was happening in the operating room, and the suffering was great. As a physician, I understood very well how critical my condition was.
Comments

Rosemarie Ahern 10/27/2020 5:19 am
Would like to know more about St Arsenie and other saints. Can you recommend any books on same. God's Blessings and peace be with you. Rosemarie Ahern

Keith Robertson4/11/2017 3:28 pm
Are these icons that are streaming myrrh a sign to strengthen faith or a warning to us?