Pascha; a Reminiscence from the Gulag

The Georgian Church for English Speakers

Should at any time we feel ourselves to be alone, or for the secular world to be so overwhelming and powerful as to render spiritual life redundant, we can reflect on the difficulties of our predecessors and be inspired by their cheerfulness and joy in the face of tremendous privations.

As mentioned before, the mid 1920’s was a period of ferocious attacks upon the Church by the Bolsheviks, both clergy and laity. Many of the faithful were executed or imprisoned in the Gulag for extended periods on nonsensical charges. The Solovetsky Island concentration camp (Solovki for short), formerly a remote monastery on an island in the White Sea region of Russia’s far north, was reserved for particularly “recalcitrant” prisoners, in particular priests from throughout the Soviet Union, including the newly annexed Georgian Soviet Socialist Republic. Conditions were brutal and fatalities commonplace. 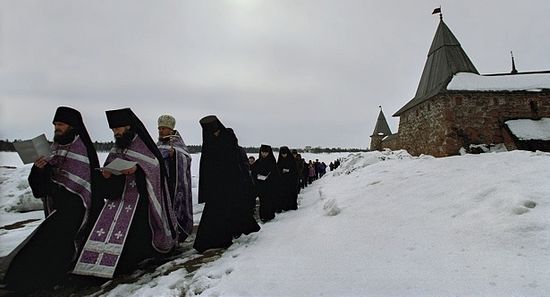 This letter from Bishop Maxim of Serpukhov, a Russian priest, is a moving testament to the resilience and cheerfulness of interned clergy during tremendous oppression. The Paschal context of his letter is poignant for us this week.

At Solovki we had several secret Catacomb “churches,” but our “favorites” were two: the “Cathedral Church” of the Holy Trinity, and the church of St. Nicholas the Wonderworker. The first was a small clearing in the midst of a dense forest in the direction of the “Savvaty” Assignment Area. The dome of this church was the sky, The wails were the birch forest. The church of St. Nicholas was located in the deep forest towards the “Muksolm” Assignment Area, It was a thicket naturally formed by seven large spruces. Most frequently the secret services were conducted only in the summer, on great feasts and, with special solemnity, on the Day of Pentecost. But sometimes, depending on circumstances, doubly secret services were celebrated also in other places. Thus, for example, on Great Thursday of 1929, the service of the reading of the Twelve Gospels was celebrated in our physicians’ cell in the 10th Company, Vladika Victor and Fr. Nicholas came to us as if for disinfection. Then, catacomb style, they served the church service with the door bolted. On Great Friday an order was read in all Companies informing that for the next three days no one would be allowed to leave the Companies after 8 p.m. save in exceptional circumstances and by special written permit of the Camp Commandant.

At 7 p.m. on Friday, when we physicians had just returned to our cells after a 12-hour workday, Fr. Nicholas came to us and told us that a Plashchanitsa (burial shroud with the image of Christ) the size of one’s palm had been painted by the artist R. The service-the rite of burial–was to be held and would begin in an hour. “Where?” Vladika Maxim asked. “In the great box for drying fish which is closest to the forest, next to Camp N. The password: three knocks and then two. It’s better to come one at a time.”

In half an hour Vladika Maxim and I left our Company and started out for the indicated “address.” Twice patrols asked for our permits. We, as physicians, had them. But what about the others?–Vladika Victor, Vladika Ilarion, Vladika Nektary, and Fr. Nicholas? Vladika Victor worked as-a bookkeeper in the rope factory. Vladika Nektary was a fisherman; and the others weaved nets. Here was the edge of the forest. Here was the box, about nine yards long, without windows, the door scarcely noticeable. Light twilight, the sky covered with dark clouds. We knock three times and then twice. Fr. Nicholas opens. Vladika Victor and Vladika Ilarion are already here… In a few minutes Vladika Nektary also comes. The interior of the box has been converted into a church. On the floor, on the wails, spruce branches. Several candles flickering. Small paper icons. The small Plashanitsa is buried in green branches. Ten people have come to pray. Later another four or five come, of whom two are monks. The service begins, in a whisper. It seemed that we had no bodies, but were only souls. Nothing distracted or interfered with prayer… I don’t remember how we went “home,” i.e., to our Companies. The Lord covered us!

The bright service of Pascha was assigned to our physicians’ cell. Towards midnight under various urgent pretexts arranged by the section, without any kind of written permit, all who intended to come gathered, about fifteen people in all. After the Matins and Liturgy, we sat down and broke the fast. On the table were Paschal cake and cheese, colored eggs, cold dishes, wine (liquid yeast with cranberry extract and sugar). About three o’clock we parted.

Control rounds of our Company were made by the Camp Commandant before and after the services, at 11 p.m. and  4 a.m. Finding us four physicians headed by Vladika Maxim, on his last round, the Commandant said: “What doctors, you’re not sleeping?” And immediately he added: “Such a night…and one doesn’t want to sleep!” And he left.

“Lord Jesus Christ! We thank Thee for the miracle of Thy mercy and power,” pronounced Vladika Maxim movingly, expressing our common feelings.

The white night of Solovki was nearing its end. The delicate, rose-colored Paschal morning of Solovki, the sun playing for joy, greeted the monastery-concentration camp, converting it into the invisible city of Kitezh and filling our free Souls with a quiet, unearthly joy. Pascha: The New Passover
V. Rev. Fr. Anastasios Gounaris
Holy Week is not a celebration of long ago events. It is the reliving of Christ's Passion and Resurrection in the present. The hymns of the week repeatedly use the present tense and the word "today" because Christ's saving Passion and life-giving Resurrection are a present day reality and hope -- not some far away historical.
Comments