ISIS is using children and even infants 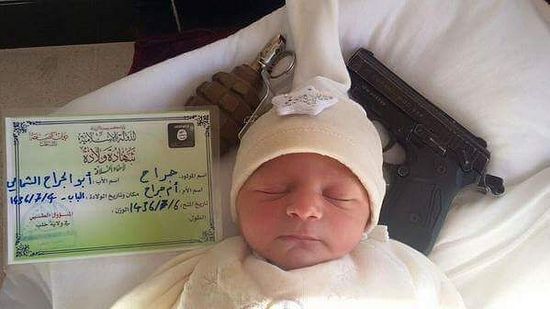 “This baby is dangerous for you, not only for us” - a photograph’s title reads.

Children who were born on the territory controlled by “the Islamic State” are becoming objects of propaganda by the terrorist organization. The recent cases of “black PR” of ISIS have shocked internet users all over the world, report news agencies.

Specifically, the first reels that were uploaded in the internet by the takfirists at the turn of last year, showed the horrific pictures of combat training of children of preschool, primary school, and secondary school ages.

At the beginning of the reel Russian speech can be heard. A person who is taking a submachine gun says: “That is all! That is all!” Another person, off-camera, is crying in exaltation in Arabic: “With the name of Allah! As Allah wished!” Then the child who shot, or, probably, another one (because he speaks pure Arabic), is answering the questions:

To whom do you belong, brother?

To “the Islamic State”.

Brother, what do you want to say to Muslims?

Training children to use firearms is accompanied by an ideological education: thus, answering short questions of the “teachers”, children of different ages are “swearing allegiance” to the IS leader, Abu Bakr al-Baghdadi, and are promising to fight against “unclean infidels” to their death.

Photomaterials from such “educational works” of ISIS are constantly uploaded by activists to the web. Last week many news reports contained published photographs made in a square in one of the settlements of the Syrian Al-Hasakah governorate. The shots that then were sent to the media by the eyewitnesses fixed the moment of execution of a new “apostate of Islam” with some children around intently observing the event.

Results of such recruitment are not long in coming. On April 21 the Iraqi volunteer corps members reported the first case of a group of new “graduates” of the extremists’ training camp, situated to the west of Ar Ramadi. According to the volunteers, children aged 9-12 were forcibly recruited by IS as its new members.

However, the islamists are even using innocent newly-born babies for their propaganda. On Sunday, April 26, a photograph appeared in the “Twitter” social network showing a baby with a pistol, a hand grenade, and a birth certificate laid in its cradle. The birth certificate was issued by “the Aleppo wilayat (province)” of IS. An activist from the city of Rakka who uploaded this shot on the internet believes that it serves as a means of intimidation to all the enemies of “the Islamic State”. “This baby is dangerous for you, and not only for us,” reads the caption under the photograph, which has provoked a stormy reaction in the global information space. ‘You Will Not Have Safety Until You Accept Islam': ISIS Kills 30 Ethiopian ‘Followers of the Cross’

‘You Will Not Have Safety Until You Accept Islam': ISIS Kills 30 Ethiopian ‘Followers of the Cross’
A gruesome new video released by the barbaric Islamic group ISIS, which identifies itself as the Islamic State of Iraq and Syria, shows approximately 30 Ethiopians, who they identified as “followers of the cross,” being massacred in Libya.

(Breaking) ISIS Executes 30 Christians on Videotape
CNN is reporting a new video tape released today showing the beheading of at least 30 Christians. Isis declares they were all Copt Christians.
Comments

Nathan5/15/2015 5:13 pm
"ISIS" is only a front for Zionist American NATO interests. They are not Muslims - they are trained Western thugs, trying to destroy the Middle East so that the rogue state of "Israel" can expand it's borders. That is it. Just like "al-Qaeda" was.

The "ISIS" videos are fakes, performed by actors in front of green screens. Please understand this.
×