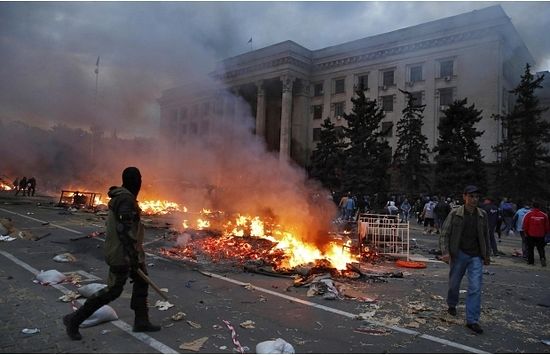 The days are coming when all the Odessa residents will remember with sorrow the tragic events happened a year ago.

Despite the time that has passed, our hearts ache and we are grieving intensely because of the irretrievable losses caused by bitterness of human hearts that on May 2 last year led to a bloody confrontation and resulted in numerous victims, the message of the Pravoslavnaya Odessa website reads.

On that day all the faithful are called to participate in the joint church prayer in houses of God before holy altars.

And, beyond doubt, no human heart on this day will remain indifferent towards compassion and prayer.

This year May 2 falls on Saturday – and on this day the Church particularly prays for the dead. With the blessing of His Eminence Metropolitan Agafangel of Odessa and Izmail in all the churches, monasteries and convents of the city of Odessa and the Odessa region on that day memorial Divine Liturgies will be celebrated followed by memorial services for the repose of all the victims of the bloody confrontation in Odessa and the Southeast Ukraine.

All believers on that day are encouraged to participate in the joint prayer in temples of God before holy altars of the Lord. Clergy of Odessa churches at the request of the victims’ relatives will serve litias for the repose of those killed in the tragedy at their graves and will also give spiritual support to their family members. Over 200 were killed in Odessa tragedy, leader of the Ukrainian Union of Orthodox Citizens claims

Over 200 were killed in Odessa tragedy, leader of the Ukrainian Union of Orthodox Citizens claims
"Over 200 people were killed. Unnamed grannies with icons who were on the square at that moment, they were commanded to enter the building, but they never left it. My guys then found ladies' bags in the site of fire. Their owners were registered neither in mortuaries nor in hospitals," Kaurov said in his interview published by the Moskovsky Komsomolets website. Investigation into Odessa tragedy continues as new details emerge
The shocking events of May 2 in the Ukrainian port, in which at least 46 people were killed, continue to be the most discussed topic not only in the Ukrainian, but also the Russian mass media. The background to the incident is now becoming clearer as video footage and eyewitness accounts surface, but many questions remain unanswered.
Comments
×