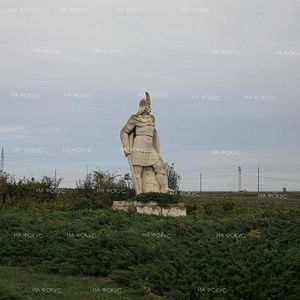 Patriarch Neofit of Bulgaria headed a solemn divine service at the Great Basilica in the town of Pliska to mark the 1,150th anniversary since the Christianisation of the Bulgarian nation and the Day the Bulgarian Church commemorates Boris I of Bulgaria.

The solemn liturgy was serviced in the open air at the ancient basilica of Pliska.

The reign of Boris I was marked with significant events that shaped Bulgarian and Slavic history, such as the Christianisation of Bulgaria.

“1,150 years after the Christianisation of the Bulgarian nation, those and many other proofs from the past yet again remind us that only by following the testaments of our ancestors we may and we hope for God’s help and protection,” Bulgarian Patriarch Neofit said after the solemn liturgy.

“The deed of the conversion of our nation was crowned yet during the life of Boris I of Bulgaria, including with the establishment of the Bulgarian Orthodox Church.
St Boris was the first to take care for the Church and the Orthodox Christian religion to enter strongly in our live and culture, building temples and vigorously assisting the work of the church enlightenment,” he said further.

“It is the faith and the Christian values that preserved our nation and helped it protect its spirit, identity and future,” Bulgarian President Rosen Plevneliev said.
The Bulgarian Head of State remarked that 1,150 years ago Bulgaria was the most powerful state in the European southeast, while Boris I of Bulgaria was the first Bulgarian statesman to realise that it was not for the new theories but rather the spiritual unity of a nation that was the groundwork for its future.

“Accepting the Christianity Boris offers the most important change in the 13-centiry history, including the Bulgarians into the family of the enlightened European nations.
Over the centuries, despite the twists of the history, it was the faith and the Christian values that preserved our nation and helped it protect its spirit, identity and future,” Rosen Plevneliev said.

“I would like to note that it was not correct to call the events in 865 conversion of the Bulgarian nation. It is rather declaring Christianity an official state religion that is the only one allowed.

We did what Emperor Constantine did in 330. By 865 Christians were big part of the population in the Bulgarian lands. Where these Christians came from? Christianity was spread here and the first Christian municipalities- episcopates were established yet in the first century. In 330 the entire population on our lands was Christian,” the historian remarked.

“We are witnessing an incredible event – for the first time a holy liturgy is serviced over the ruins of the place where the first big Episcopal basilica, or the Great Basilica of Pliska, was built by Boris I of Bulgaria,” said Konstantin Nushev, theologian and lecturer at the Faculty of Theology of Sofia University.

“This is something that has never been done before. The service will take place at the site where the walls of the basilica are partially preserved. The Great Basilica of Pliska will be is used again,” Nushev remarked. Orthodox Christians celebrate Christianization of Kievan Rus
The Christian baptism ceremony celebrated the commemoration day of St. Vladimir with the Family Marathon rally, which was attended by more than 400 families.
Comments