On June 13, 2015, a new Orthodox Church in honor of St. Sergius of Radonezh will be solemnly opened in Paldiski, Estonia. The temple is constructed to a design by the prominent Russian architect Viktor Shadrin and meets all the requirements of wooden architecture, reports Blagovest-info. 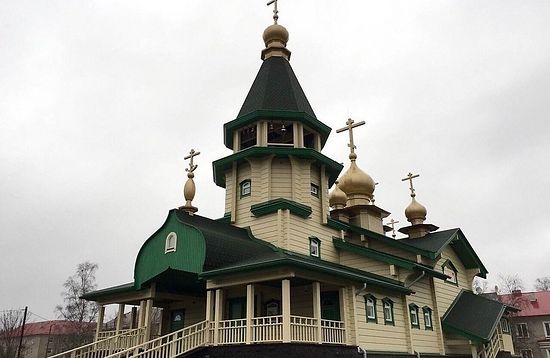 The church will be consecrated by Metropolitan Cornelius of Tallin and All Estonia.

The new temple has been built for a relatively short time, only for two years, through the efforts of local sponsors, enabling those responsible for its construction to work without delays and to make prompt decisions, reports Delfi.

At one time the board of trustees appealed to the benefactors Sergei Chaplygin and Alexandra Azova with the request to take the responsibility for construction of a new church as the old one by then could not provide enough space for the Orthodox community of the town and its surroundings which had considerably grown.

The family of the sponsor Sergei Chaplygin bought the lands and started construction of the church which has been completed successfully. For financing of this project a charitable foundation in memory of Boris Chaplygin—father of Sergei who had contributed much to the development of the town of Paldiski—was established.

The cross for the temple was made in Estonia and six bells were cast at a factory in the Russian city of Voronezh. The largest bell weights 1.5 metric centners (c. 330 lbs).

After its opening the church will accommodate up to 200 people. The church perfectly fits into the townscape, supplementing and transforming it.

By this moment stained glass windows by the Estonian painter Andrei Lobanov as well as a splendid carved iconostasis (made in the Greek city of Thessaloniki) are installed in the church.

In addition to this, the interior furnishing is nearly completed and planting of trees and shrubs on the territory of the church is finished. Clergy of Lutheran Church in Estonia demand that Pastors are forbidden to be Masons
Thirty clerics of the Estonian Evangelical Lutheran Church have addressed the Church administration with the request "to forbid priests to enter the organization of masons because "it does not correspond to their holy calling" and "causes a lot of misunderstanding among both clergy and laity, and provokes rejection and prejudices in the Estonian society on the whole".
Comments
×