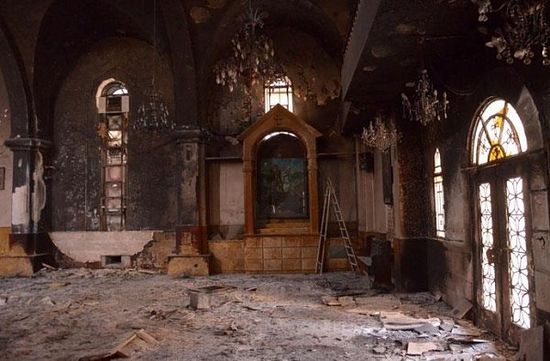 63 Christian churches have been destroyed during the years of war in Syria. The human rights organization, “Syrian Network for Human Rights” (SNHR), has published a report, entitled “Targeting Christian Places of Work in Syria”, reports Sedmitza.ru.

Authors of the report state that during the four years of war, churches were destroyed both by the opposition forces and the government army of President Bashar al-Assad. According to the 21-page report, directed against the legitimate regime, 14 churches were burned down by the opposition, 7 churches – by extremist groups (ISIS, Al-Nusra Front), while another 40 fell victims of the “ruthless” regime of B. al-Assad.

The report mentions one incident of deliberate desecration of a church in Kasab by the government troops. However, according to “World Watch Monitor”, islamists from “Al-Nusra” are responsible for that crime.

In spite of the consistent criticism of the Syrian government, SNHR admits that the majority of the churches “destroyed by the government forces” were situated on the territories controlled by the opposition.

SNHR also claims its experts verified every single photograph and video provided by local inhabitants and media. The group notes that it is impossible to describe all the cases of attacks on Christian churches.

“Christians and their places of worship are suffering as much as the whole of the Syrian nation. Missiles and bombs do not differentiate the religious from the non-religious,” the experts say.

However, the report accuses only ISIS militants of desecration of Christian crosses. They are accused of breaking down four crosses and converting two churches into military bases. Among the crimes committed by IS militants are ransacking of churches and destruction of icons.

SNHR is blaming the opposition, the extremist groups, and the government forces for committing military crimes by means of “intentional targeting” of churches and is adding that “this was not random destruction.”

The organization is also convinced that using churches as military bases is a violation of international law.

As-Safir on the History of the Persecution of Middle Eastern Christians
Christian Decline in the Middle East: A Historical View
Comments

Lucy7/7/2018 11:26 pm
Please update your article and remove the false information that Brutal Assad regime destroyed Churches. The Syrian Government protected Churches. I think your source gave you bad information. It was ISIS and so called moderate rebels/jihadists who came into Syria from other countries that destroyed churches.

cecilia guzman5/24/2016 1:48 am
My heart broke when I saw what happened here and throughout Syria. I visited the monastery in Sadnaya-- loved Maaloula, Palmyra, and all the other areas from Palmyra to Aleppo all along the coast and I felt so at home. I explored often when I lived in Damascus and and I loved the Arab people-- they were always so "welcoming". My husband used to say "I think I was Arab somewhere along the way because I feel so at home here". I'm praying for you.

Olga Ibrahim Naccache5/27/2015 10:18 pm
The Syrian government never touched a church for 40 years Christian and all minorities have been always protected and respected in Syria
When the islamofashists terrorists backed by the West and Turkey Saudi and other enemies of humanity where sent to Syria under the banner of democracy...the terrorists assaulted the churches ...what was the Syrian government supposed to do ...... watch them pr destroy them wherever they were....
×