On the Sunday of All Saints of America 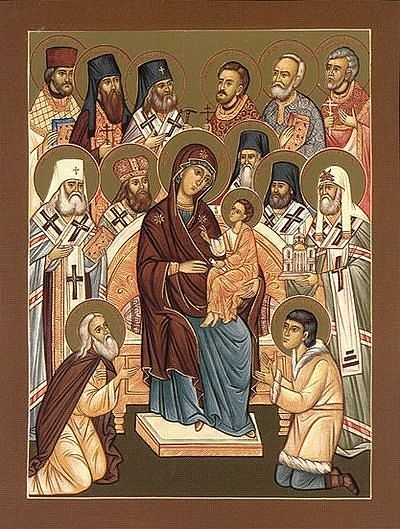 All the Saints of America

Last week the Church celebrated the great feast of All Saints—in which every saint, known and unknown is commemorated—and this Sunday we commemorate specifically all the Saints of Russia, while especially in America is celebrated the Feast of All Saints of North America. We have been blessed with several great saints in our land—St. Herman who first brought Holy Orthodoxy to this continent from Russia in the 1700's, St. Tikhon, the Patriarch of Moscow who founded our St. Tikhon's Monastery, St. Nikolai Velimirovich, who taught and reposed at our Seminary, and St. John Maximovitch, the wonderworking bishop of San Francisco, among several others. But there is one person in particular that I would like to talk about today—the monk and priest Fr. Seraphim Rose.

Although he is not officially canonized, Fr. Seraphim is the first truly American saint. Our other great saints came to us as Apostles from Orthodox lands or were born in America into Orthodox families, but Fr. Seraphim rose up from America's own womb and religious and cultural heritage to blaze for us a trail to the very heart of Orthodox Christianity—and that heart is Christ Himself. The saints are those who unite themselves to Christ and reveal Him to the world. Fr. Seraphim opened for us the door to American sanctity—he proved that the American soul, even as it is molded in a wholly un-Orthodox and increasingly un-Christian atmosphere, can be refashioned after the image and likeness of Christ; and it is this image that we can see in Fr. Seraphim. And he is especially relevant to us because he lived quite near to our own times: he was born in 1934, and reposed in 1982. Our struggles of modern American life were also his struggles, and in him we see one who turned only to Christ for rest from these labors. 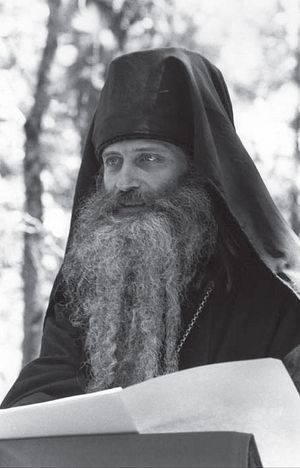 Fr. Seraphim's family was not particularly religious, but in middle school he was baptized and confirmed in the Methodist Church of his own accord. However, he also possessed a great mind and his interest in science and philosophy soon replaced his interest in Christianity. He came to reject the notion of God because he could not prove the existence of God through science or philosophy—he had fallen prey to the lie of the western world. He later explained it this way: “Our age has been taught to believe in nothing higher than the human mind, and in the ideas of that mind; that is why the conflicts of our day are ‘ideological’, and why Truth is not in them. For Truth is only in living communion with living Truth, Christ; apart from Him there is no life, no Truth.” But he had not yet found this Living Truth. I'm sure we all know this struggle—we are surrounded by people who proudly proclaim themselves atheists because they claim there is no evidence of the existence of God! Using their own reasoning they cannot make sense of the claims of Christianity—that God became man and was crucified and rose again for us—that we are united to this death and resurrection in baptism, and that we receive the very Body and Blood of Christ Himself in Communion. The spirit of the air tells us that if our minds cannot comprehend such claims then we must reject them—and even those of us in the Orthodox Church are not immune to this danger.

And in his youth, Fr. Seraphim was one of these people. Under the influence of science and philosophy he rejected Christianity, and he turned his attention to eastern philosophies and religions, which were so fashionable in his times and still are today. He lived in San Francisco in the time of the beatniks and the hippies and for a time he engaged fully in these lifestyles. Although these are no longer prominent movements, their influence is certainly still strongly with us. We know, for instance, that the sexual revolution set in motion at that time has rolled steadily ahead, ever gaining more steam; and before finding Holy Orthodoxy, Fr. Seraphim engaged in a rather hedonistic lifestyle. But he had a great desire for truth, and so he also studied Zen Buddhism and Taoism, but there he did not find the truth. Because of this he knew great suffering. He was able to see through the lie of modern American society, but his mind could not see the answer. He had no idea what his life was about. In his despair he indulged in drink and licentious behavior, and whatever he did, he did to the extreme. One night, in a drunken rage he began screaming at God and daring Him to kill him, just so he could know whether or not God was real—so great was His desire for truth, and the suffering he experienced for not yet knowing it.

Eventually his search led him into the Russian Orthodox Cathedral in San Francisco. Through his long search and his great suffering his heart had become supple and in his heart he knew that he was home. In the grandeur of our Orthodox worship his heart found what his head had been unable to discover—the ultimate Truth. In his Buddhist and Taoist days he believed that the idea of a personal God was unsophisticated, but now he knew the Truth precisely as a Person—Jesus Christ. Orthodoxy is a supremely Personal faith—this is why we adorn our churches with icons—these are persons who show forth to the world the Person of Jesus Christ, according to whose image we are all created. The saints are those who know this truth and fulfill the human potential to become like our Lord Jesus Christ.

Whereas once he trusted wholly in his mind, now he could say: “When I became Christian I voluntarily crucified my mind,” that is, he willingly submitted his mind to the wisdom of the Church. He no longer demanded that the logic of his mind be satisfied, but rather, in his heart he accepted the timeless truths of the Orthodox Church. He further stated: “And all the crosses that I bear have been only a source of joy for me. I have lost nothing and gained everything.” This word, of crucifying his mind, and taking up his crosses can be a great lesson and inspiration for us. Fr. Seraphim is a saint—precisely because he learned to live through his heart. He also spoke of this as suffering Orthodoxy, and he taught that God revealed Himself to man through a suffering heart. This is how Fr. Seraphim had come to know Christ in that Russian cathedral—his heart had been prepared and was open to the Truth.

What we see in Fr. Seraphim is dedicated and earnest repentance. Upon turning to Christ he immediately gave up his life of drunkenness and debauchery and false philosophies. He put it down and never once looked back. I find this quite simply amazing—he turned from the pleasures of the flesh with steadfast resolve. Fr. Seraphim accepted without questioning the teachings of the Church and his heart burned with great desire for Christ. Because of this He drew ever nearer to Him. Once he had suffered by not knowing the truth, and now he suffered in the service of the Truth. He strove with all his heart to destroy the old man—the sinful man—and to live again to Christ. We heard of this in the Gospel today—blessed are they that mourn, for they shall be comforted. This is not talking about moping around and being depressed, but rather a blessed mourning for our sins. When our sins cause us pain of heart then we can truly turn from them and be open to Christ. If we do not know this pain of heart, as did Fr. Seraphim, then we must begin now to beg God for this blessed mourning, for this suffering Orthodoxy of the heart.

There is much I could have said about Fr. Seraphim, but I think it is important to focus on his struggles that so closely mirror ours. He shows us that modern American life can be safely navigated in the saving enclosure of the Orthodox Church, with the guidance of our Lord Jesus and Christ and His All-Holy Spirit. Our struggle is not futile—our minds do not have to keep us from knowing the Truth and from knowing joy and repentance. It is still possible to be led by our hearts, and Fr. Seraphim is the proof of this. And the whole Orthodox world joins us in glorifying him. In Russia, Serbia, Romania, Bulgaria, Greece, on Mt. Athos, and elsewhere, Fr. Seraphim is a well-known and well-loved modern holy elder. His books and icons are sold and he is revered as a true guide for modern man. Fr. Seraphim is a great light shining from America to the rest of the world, especially shining on his own America. He is a beautiful jewel in the crown of American Orthodoxy, and he shows us the path to attaining our own crown—the crown of victory in Christ.

Through the prayers of our holy Father Seraphim and all the saints of North America may our Lord Jesus Christ have mercy upon us and save us. Amen. Father Seraphim Rose - Living the Orthodox Worldview
Hieromonk Seraphim (Rose)
Why is the truth, it would seem, revealed to some and not to others? Is there a special organ for receiving revelation from God? Yes, though usually we close it and do not let it open up: God’s revelation is given to something called a loving heart. This indicates that no matter how often we might hear the truth, if we have no love, we will not receive it; and to the contrary, though we may not even be searching for the truth, but have love, the truth may find us. But if others have not found the truth it would be madness for us to condemn them, saying “we have found the truth”, because our own possession of truth depends upon our loving heart.
Comments

Foma6/19/2015 12:30 pm
Thank you very much brother Jesse! It fundamental to point to the crucifixion of the rational mind that has only itself as a reference. This is the 'wall' that most modern people face in searching for meaning. Fr. Seraphim demonstrated that one doesn't 'give up you intelligence' and become blind and unquestioning servant of dogmas but that freedom in Christ enables us to use our reason more powerfully that we ever imagined and that our questioning is no longer a source of doubt and hesitation, but of inquiry and growth. Great article!
×