Serbia without Kosovo is like a corpse without soul and heart, Patriarch Irinej says

On June 28 Serbs all over the world commemorated the Battle of Kosovo (1389) – Vidovdan. On this day solemn services, processions of the cross, prayers for repose of souls of the heroes who gave their lives for the faith and freedom are held in Serbia and abroad. 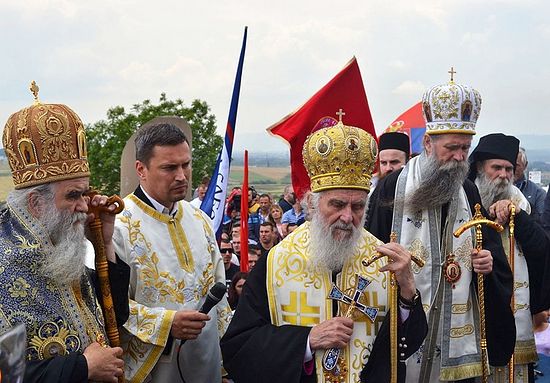 This year at Gracanica Monastery of the Dormition of the Mother of God in Kosovo His Holiness Patriarch Irinej celebrated a Divine Liturgy with several Serbian hierarch concelebrating. After the service the primate addressed himself to the faithful and noted that on that day all Serbs were spiritually with Kosovo.

“Today the eyes, thoughts, and feelings of all Serbs – in our motherland and all over the world – are spiritually here, together with us.

There is no greater sacrifice than to lay down one’s life and sacrifice oneself; it was this sacrifice that the Holy Prince Lazar made and with him – the numerous army of Kosovan heroes who came together with him to the Battle of Kosovo (“the Kosovo Polje”), who shed there their blood and filled this holy soil with it,” the patriarch accentuated.

Metropolitan Amfilohije of Montenegro and the Littoral, Bishops Joanikije of Budimlje-Niksic, Teodosije of Raska-Prizren, Jovan of Slavonia, Atanasije of Zahumlje and Herzegovina (retired) as well as an assembly of clergy concelebrated with the Patriarch at the Divine Liturgy at Gracanica.

The faithful from Serbia, Montenegro, Republika Srpska, and diaspora came to Gracanica and Gazimestan (the monument commemorating the Battle of Kosovo). At the end of the Vidovdan celebration the fallen Serbian heroes were commemorated. We shall uphold the candle of Orthodoxy in Kosovo!
Plea to parishioners and all who wish to help.

We shall uphold the candle of Orthodoxy in Kosovo!
Plea to parishioners and all who wish to help.
Archimandrite Tikhon (Shevkunov)
Today, at the threshold of Great Lent, with the blessing of His Holiness Kirill, I would like to address you with a special sermon. You all know that that for two decades now, a tragedy is happening in the Serbian land. The Orthodox inhabitants of Kosovo and Metohija have been pushed out of their ancient, native lands. Many have lost their lives, not to mention their property. Kosovo Serbs: Blood Flows, Plans Stall
Aleksandar Mitic
The brutal murder of two Serb young men and the wounding of two others on 27 August in southern Kosovo has highlighted the lack of progress in decentralizing the province, a process seen by Kosovo Serbs as key for their survival in the Albanian-dominated province.
Comments
×