The Life of St. John the Baptist

From "The Lives of the Saints and Several Lectures and Sermons" compiled and translated by St. Sebastian Dabovich 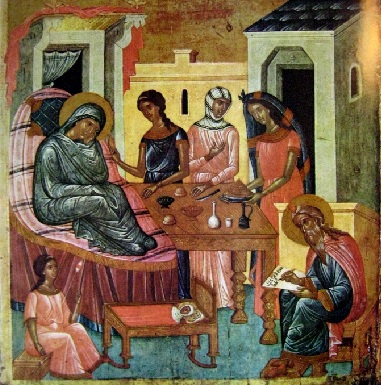 Saint John the Baptist was the son of the Jewish Priest Zacharia. His mother was Elizabeth, a blood-relation to the Most Blessed Virgin Mary. This righteous couple were childless, for Elizabeth was barren. They prayed much and long; as true Israelites they desired the consolation of being blessed with children, aspiring,—but in this instance with an humble and holy resignation—to the birth of the great Messiah, who was coming to save mankind, and, as they thought, to free and unite Israel. Although Zacharia and Elizabeth sorrowed in their old age to a day which was beyond the natural limit of child-bearing, still they continued hopefully praying. The prayers of faith of this priest and his patient spouse ascended on high, from whence came down an angel with the message telling them that the Creator of nature and the God of wonders had been pleased to fulfill their desire. Accordingly, Elizabeth bore unto her husband Zacharia a male child, who was called John.

This John was called by God to be the forerunner of his Divine Son, to usher Him into the world, and to prepare mankind by repentance to receive the Redeemer, whom the prophets had foretold at a distance through every age from the beginning of the world, never ceasing to instill in the people of God faith and hope in Him by whom alone they were to be saved. At first St. John led a most austere life in the wilderness, exercising himself in prayer and meditating on the high mission he was called to perform. In the thirtieth year of his age, John came from out his seclusion. This was also the age at which the priests and Levites were permitted by the Jewish law to begin the exercise of their functions. Clothed in camel's hair, held to his person by a girdle of raw leather, the man of the desert, who knew not the luxuries of a dwelling-house, nor the taste of cooked food, himself subsisting on locusts and wild honey, comes to the thinly settled banks of the river Jordan, and preaches repentance, baptizing all comers. Make ye the way straight, says he; for cometh He whose sandal-strap I am not worthy to unloose; He shall baptize you with the Holy Ghost and with fire. John was received by the people as the true herald of the Most High God. All classes of people came and listened to him. Among them were many Pharisees, whose pride and hypocrisy, which rendered them indocile and blinded them in their vices, he sharply reproved. The very soldiers and publicans, or tax-collectors, who were generally persons hardened in habits of immorality, violence, and injustice, flocked to him. He exhorted all to works of charity and to a reformation of their lives, and those who addressed themselves to him in these dispositions, he baptized in the river.

The baptism of John differed entirely from the great Christian sacrament of baptism, as the first was an emblem of the effects of living in the fear of the justice of God by abstaining from evil deeds, whilst the latter wholly delivers us from the original sin and the consequences, and makes us the children of God, by the grace of our Lord Jesus Christ.

When St. John had already preached and baptized about six months, the Lord Jesus went from Nazareth, and presented Himself, among others, to be baptized by him. The Baptist knew Him by a divine revelation, and, full of awe and respect for his sacred person, at first excused himself, but at length acquiesced out of obedience. The Saviour of sinners was pleased to be baptized among sinners, not to be cleansed Himself, but to sanctify the waters, and to manifest Himself to the world, which was represented in the great mass of people which came to John. And John bear witness of Him. Pointing Him out before the Jews, John said, Behold the Lamb of God, which taketh away the sin of the world! John the Baptist reproved the vices of all men, no matter who they were, with an impartial freedom and in a fearless spirit. He disclosed the hypocrisy of the Pharisees, and uncovered the profaneness of the Sadducees; he denounced the fraud of certain government officials, —i. e. the publicans,—the rapine and licentiousness of the soldiers, and the incest of King Herod himself. Now, Herod had unlawfully taken unto himself Herodias, the wife of his own brother Philip, who was still living. When the saint said to the king, It is not lawful for thee to have her, Herodias set herself against him, and desired to kill John. Herod reverenced John as a holy man; therefore he dared not harm him. Nevertheless he had the saint within his reach, in prison, for he could not bear to have the sore spot of his weak conscience tampered with. St. John faithfully completed his mission, and he understood when his time was up; even before this, he said, Jesus must increase, but I must decrease. While in confinement the righteous preacher was still anxious to bear testimony to the glory of the Saviour; we read furthermore in the Gospel that, on hearing in prison of Christ's wonderful works and preaching, John sent two of his disciples to Him for their information, not doubting but that Christ would satisfy them that He was the Messiah; and that by His answers they would lay aside their prejudices, and join themselves to Him. 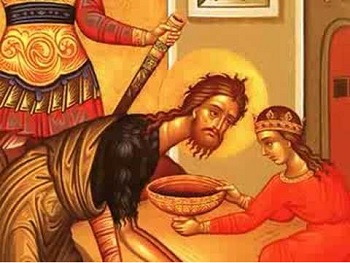 Herod continued to respect John; he would sometimes send for him, and listen to him with pleasure, though he was troubled when he was admonished by him for his faults. In the meantime Herodias sought an opportunity to compass the Baptist's destruction. An occasion at length fell out favorable to her designs. It was on the birthday anniversary of the king, when he made in his castle a splendid entertainment for the nobility of Galilee. During a sumptuous repast, Salome, a daughter of Herodias by her lawful husband, danced before the guests, and so pleased the king by her dancing, that he promised her, with the sacred bond of an oath, to grant her whatever she asked, though it amounted to half of his dominions. The damsel consulted with her mother, and she dispatched her daughter with haste, to demand that the head of John the Baptist be brought in to her at once on a charger. This strange request startled the drunken tyrant himself. He, however, assented, though with reluctance, but for the sake of his oaths, and of them that sat at meat, he ordered a soldier of his guard to strike off the head of St. John. In this way the bloody head of the holy prophet was brought into the hall, where they ate and drank and made merry with music, and it was given to the young dancer, who took it and carried it to her mother. No doubt Herod had no thought of the oath, while giving it, that it was a sinful one, but he committed a much greater sin by keeping his oath. And thus it was that John the Baptist, the man of the desert, ended his life, one of the chief causes of his death being a sinful supper. But, by God's mercy, he was not put to death before he had fulfilled his great duty as the forerunner of our Lord Jesus Christ. The many virtues of St. John, those of a martyr, a virgin, a teacher, and a prophet, were exalted in praise by Christ Himself, when he said to the multitudes of the people: Verily, I say unto you, there hath not risen among them that are born of women a greater than John the Baptist. When his disciples hearing that John was executed in prison, they came and took his body and laid it in a tomb.

The misfortunes which befell Herod after the death of John the Baptist, the Jews said were punishments from God for the murder of his servant, as their historian, Joseph Flavins, records. Aretas, the King of Arabia, and the father of Herod's first wife, struck a deadly blow at the army of the Galilean ruler. Soon after this the Roman emperor banished Herod into exile. The holy relics of St. John did not remain for all time in their tomb at Sebastia. When the holy apostle Luke visited this city, he took the right arm of the saint and brought it to Antioch, where the Christians treasured it for a long time. When, in 956, the Mohammedans took possession of Antioch, a deacon by the name of Job carried the relic to Halcedon, from which place it was brought, on the eve of the Epiphany, to Constantinople. The Turkish sultan, Bajazet, desiring to please the Crusaders, presented the Knights of Malta with the arm of the great Baptist. In 1799, this order of knights sent the relic of St. John to the Emperor Paul I of Russia, and the great prophet's arm may be seen to this day in the royal palace in the "Chapel of the Saviour's Uncreated Image." The Holy Church celebrates the birth of St. John the Baptist on the 24th of June. On the 29th of August, she commemorates his beheading. And on the 7th of January, the Church praises the great saint for his whole life, his works, and his mission, as he was selected to be the baptizer of Jesus Christ, the Son of God.