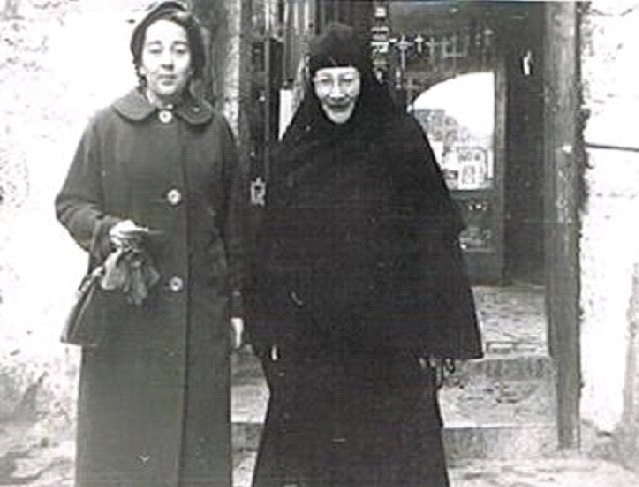 Princess Irina S. Bagration with her mother-in-law, Mother Tamara, Abbess of the Mount of Olives Convent in Jerusalem

Princess Irina S. Bagration passed away this morning July 9th at 2 am in New York. The funeral will be at 10 am on Saturday, July 11th at Holy Trinity ROC in Astoria, NY. Burial will be at the Novo Diveevo Convent in Nanuet, New York following the service.

She became the second wife of Prince Teymuraz Constantinovich Bagration, at the age of 23 in 1949.

Prince Teymuraz was born at Pavlovsk on 21 August 1912. His father, Prince Constantine Bagration-Mukhransky (1889–1915), a member of the Mukhrani branch of the Bagrationi family, formerly a royal dynasty of Georgia, was an Imperial Russian Army officer and was killed in World War I. Teymuraz's mother, Princess Tatiana Constantinovna of Russia (1890–1979), was the third child and oldest daughter of Grand Duke Constantine Constantinovich of Russia and his wife, Elisabeth Mavrikievna, née Princess Elisabeth of Saxe-Altenburg.

After her children were grown and married, Princess Tatiana took the veil at Geneva in 1946. She died as Mother Tamara (named so after the medieval Georgian queen Tamar, a remote ancestor of Tatiana’s first husband), Abbess of the Mount of Olives Convent on 28 August 1979 in Jerusalem.

Teymuraz Bagration left Russia after the 1917 Revolution. During World War II, he served in the Royal Yugoslav Army. After the war, he emigrated to the United States and joined the Tolstoy Foundation in 1949. His marriage to Princess Irina took place on 27 November 1949 at New York. They had no issue. He became Executive Director in 1979 and led the organization from 1986 until his death at New York on 10 April 1992.

On 5 July 2007, Princess Irina presented her husbands’ unique archive to the National Parliamentary Library of Georgia.

I made the acquaintance of Princess Irina in the late 1990s, and enjoyed numerous telephone chats, in which she shared her memories of her cousins, Grand Duke Gabriel Constaninovich (1887-1955), author of Memories in the Marble Palace, and Princess Vera Constantinovna (1906-2001)—both children of Grand Duke Constantine and Grand Duchess Elisabeth. Archbishop Michael of Geneva and Western Europe Participates in the Reburial of the Remains of Grand Duke Nikolai Nikolaevich and His Wife
On April 30, 2015, His Holiness Patriarch Kirill of Moscow and All Russia participated in the ceremony of the reburial of Grand Duke Nikolai Nikolaevich the younger, and his wife, Grand Duchess Anastasia Nikolaevna. Having died in exile and first buried at Archangel Michael Church in Cannes, France, they are now being reinterred in Moscow at the Bratsky Military Cemetery in Sokoly. Sts. Martha and Mary Convent in Moscow to Celebrate the Feast-Day of its Foundress
July 18 is the feast-day of the Holy New Martyrs Grand Duchess Elizabeth (Romanova) and Nun Barbara (Yakovleva). On this day everybody is welcome to take part in the festive events, dedicated to commemoration of the Holy Grand Duchess, which will take place at the SS. Martha and Mary Convent of Mercy in Moscow.
Comments
×