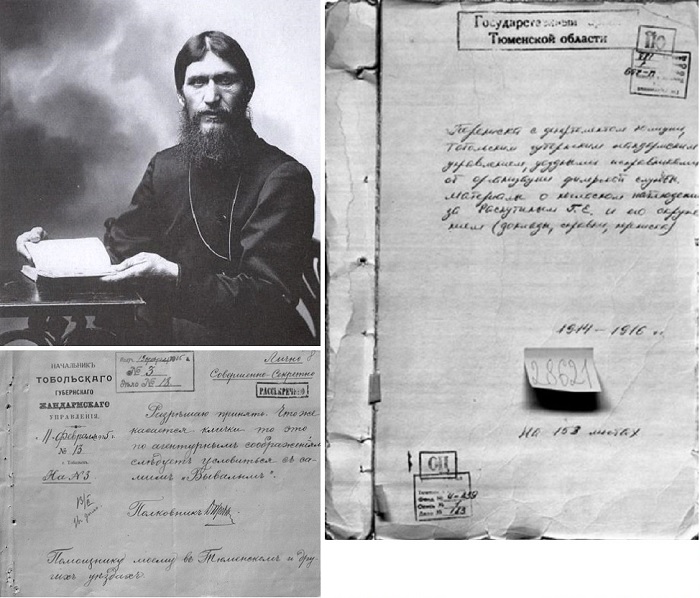 St. Peterburg’s Boris Yeltsin Presidential Library recently accepted a considerable collection of declassified documents from the Tobolsk State Archives. The 239 documents dating from 1914-1916 reveal the disorder in the Secret Service and other intelligence departments of the time, reports Royal Russia.

Of especial interest is the information on the secret surveillance of Rasputin beginning in the summer of 1915, by the order of the Minister of Internal Affairs of the suite of His Majesty, Major-General Vladimir Dzhunkovsky. Two secret agents were assigned to tail Grigori Rasputin, reporting on all his movements and on those who visited him.

The correspondence with the gendarmerie police department in Tobolsk reveals its lack of funds and proper administration during the tumultuous years of the First World War. Agents were fired, others reduced to part-time, and salaries were reduced. One letter of the head of the Tobolsk gendarmerie Vladimir Dobrodeev noted that throughout several counties only three agents were deemed necessary—the rest “[could] be either dismissed or demoted” and their reliability was questioned.

The documents also demonstrate the inadequacy of the Rasputin surveillance, and the seeming disinterest of some of the agents. For instance, one agent wrote, “Since Rudolf Berg had stayed only a few hours, it was not possible to find out for what purpose he came to Pokrovskoe to see Rasputin,” and of an incident on the steamer “Tovar-par” one agent responded, “On the boat Rasputin was drunk heavily, behaved outrageously and offered some books, but I did not pay attention to the content …” In another situation the gendarmerie chief wrote, “From this I conclude that the sergeant Ivan Ivanov, who has been serving as a sergeant for ten years, fulfills his official duties not carefully enough ...”

The documents also seemingly indicate that the lackluster conditions of the secret service, with its wasting of time and money in obsessing over small details concerning Grigori Rasputin, allowed underground German communications throughout Russian to go for a time unnoticed. On July 22, 1915 it became known that a German newspaperman was sending telegrams from a spot in Tyumen on the Tura River.

While history typically looks back on Rasputin with ideas stemming from the investigative reports of the Secret Service and the like, these declassified documents demonstrate the need for a reevaluation. In Memory of the Royal Martyrs, Through Personal Testimony
Jesse Dominick

In Memory of the Royal Martyrs, Through Personal Testimony
Jesse Dominick
Tsar Nicholas and his beloved family— the Tsaritsa Alexandra, the Tsarevich Alexei, and the Grand Duchesses Olga, Tatiana, Maria and Anastasia—along with their faithful servants were eventually to go to their deaths in a dank basement in Ekaterinburg. In their lives they stood for family, humility, nobility, duty, the Russian people, and above all for the holy Orthodox faith. And in the end they gave their lives for their nation and for that holy Orthodox faith, prevailing as the early martyrs before the lions. Having given their lives for Christ, they now intercede for us before Christ.

Romanov family wants new probe into Nicholas II killing
The Romanov family is demanding a new criminal case to investigate the killing of Russia's last Tsar and his family.
Comments

george miller7/31/2015 2:53 pm
most interesting and proves just how human and much alike we all are. the boring task of observing through it's dullness show the weakness such efforts can have in failing to produce true findings of fact. the pressure to produce a report can result in being creative with the facts ,thus making such reports come into questionable value

Dn Nicholas D7/30/2015 6:36 pm
Another testimony to the fact that Bolshevik/Soviet rule was a rupture with the past, not a continuation of dictatorial governance under new management.
×