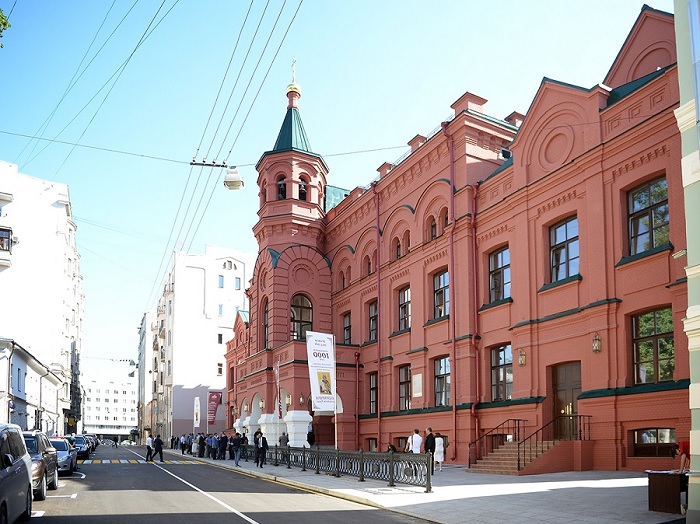 The Eparchial (Diocesan) House is situated on Likhov Lane in Moscow

On July 26, His Holiness Patriarch Kirill of Moscow and All Russia visited the newly restored Eparchial (Diocesan) House in Moscow. The restoration of the historic compound was carried out as part of the Presidential program of celebrations devoted to the millennium of the demise of the Holy Prince Vladimir.

His Holiness celebrated the Great Consecration of the Chapel of the Holy Prince Vladimir Equal-to-the-Apostles at the Moscow Eparchial House, followed by a Divine Liturgy at the newly consecrated church. He also consecrated the lower church dedicated to St Tikhon and the canonized fathers of the 1917-1919 All-Russia Local Council of the Russian Orthodox Church.

The following day, Russian President Vladimir Putin visited the Chapel of the Holy Prince Vladimir Equal-to-the-Apostles at the Moscow Diocesan House. He was greeted by His Holiness Patriarch Kirill of Moscow and All Russia Kirill, Mayor of Moscow Sergei Sobyanin, Minister of Culture Vladimir Medinsky, Plenipotentiary Presidential Envoy in the Central Federal District Alexander Beglov, and Rector of the St Tikhon Humanitarian University Archpriest Vladimir Vorobyev.

President Vladimir Putin said that the building is very important for Russia’s culture and history, and went on to say that the restoration of this historical building is equally important. “It reflects the fact that we remember not only our victories, but also our mistakes,” he explained. “We learn from our mistakes,” added the president.

Putin also thanked Patriarch of Moscow and All Russia Kyrill for all he has done to help restore the Eparchial House. He then presented His Holiness with an icon of the Mother of God from the late 19th century. In turn, Patriarch Kirill presented the Russian president with an icon of St Vladimir. 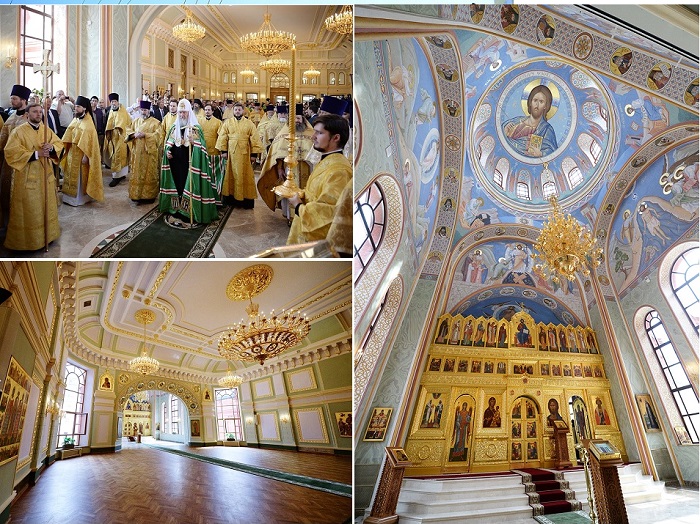 On July 26, His Holiness Patriarch Kirill of Moscow and All Russia visited the newly restored Eparchial (Diocesan) House in Moscow, where His Holiness celebrated the Great Consecration of the Chapel of the Holy Prince Vladimir Equal-to-the-Apostles (right)

Construction of the Eparchial House began in 1901 with the blessing of the Holy Martyr Vladimir (Epiphany), the Metropolitan of Moscow. The consecration of the house took place on November 5, 1902, and on December 30 the church was consecrated in the name of Prince Vladimir Equal-to-the-Apostles.

After the 1917 October revolution, the Church Council of the Russian Orthodox Church used the House for meetings. The Council restored the title of Patriarch and chose Tikhon as the next head of the Church. During the Russian Civil War Patriarch Tikhon was widely seen as anti-Bolshevik, and many members of the Orthodox clergy were jailed or executed by the new regime. 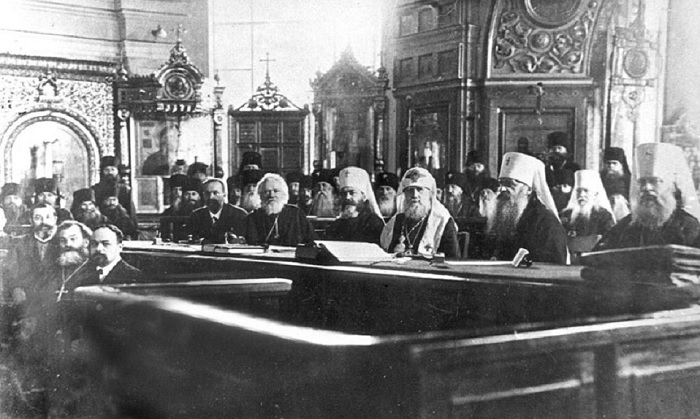 Newly elected Patriarch Tikhon presides at the “All-Russian” Church Council in Moscow, 1917. Tikhon openly condemned the killings of the tsar’s family in 1918, and protested against violent attacks by the Bolsheviks on the Church. Patriarch Tikhon was canonized a saint by the Synod of Bishop of the Russian Orthodox Church Outside of Russia on November 1, (O.S. October 19), 1981. He was later glorified by the Moscow Patriarchate during the Bishop’s Council of October 9-11, 1989.

Pre-revolutionary photographs of the Eparchial (Diocesan) House in Moscow

On September 20, 1918 the work of the Local Council was forcibly interrupted, and on June 15, 1922 the Eparchial House was permanently closed. The Bolsheviks subsequently looted the buildings museum collections, and libraries, then destroyed the furniture. In April 1930, the former Eparchial House served as the Central Documentary Film Studio. Numerous reconstructions during the Soviet years resulted in the building losing its historic appearance, including the destruction of the bell tower and dome of the Vladimir Church.

The Eparchial House was returned to the Russian Orthodox Church in 2004. Its reconstruction and restoration lasted 10 years. By the summer of 2014, work was completed on the preparation of the upper walls of the church. On December 17, 2014 the consecration and lifting of the cross and the bell tower dome of the Church of St. Vladimir was carried out.

The Eparchial House is a designated cultural heritage site, and protected under laws of the Russian Federation, it is located in Likhov Lane in Moscow. The historic building will now be home to the Orthodox St. Tikhon University of the Humanities.