St. Arsenios of Paros: Qualities of a True Spiritual Father 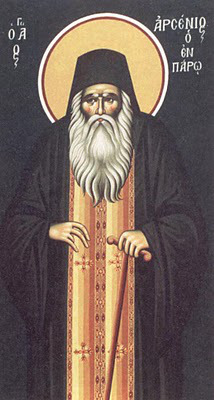 The Holy Elder Philotheos (Zervakos) points out the qualities of the good Confessor or Spiritual Father using St. Arsenios of Paros (1800-1877) as his exemplar. These qualities are particularly the following: humility, gentleness, patience, discernment, compassion and love. These virtues, he says, Father Arsenios eminently possessed. Thus, he remarks:

“St. Arsenios received all with love and paternal affection, and gave to all with understanding and discernment the ‘medicines’ necessary for the therapy of their souls. Besides other necessary ‘medicines’ he used to give to all two common ones: the medicine of repentance and the medicine of God’s compassion and love. He exhorted all to repent sincerely, and not to despair on account of their many sins, but to have hope in God’s immeasurable compassion, realizing that God accepts sinners when they repent. As proof of God’s great compassion he cited the examples of the Prodigal Son, the Thief, the Harlot, the Publican, and many others. Through love and gentleness Arsenios led many to repentance and salvation.”

Father Philotheos Zervakos goes on to give a very moving example of how St. Arsenios the New acted as a Confessor. It is as follows:

“A certain girl from the island of Syros(One of the Cyclades Islands, not far from Paros.) went to the Convent of the Transfiguration of Christ on Paros to visit her sister, who was a nun there. The latter had previously been informed that her sister had deviated from the right path; and when she was notified that her sister was outside the gate of the convent and wanted to see her, she at once began to scream and say: ‘Go away, go far away from the convent, because you are defiled and will defile the convent of the nuns.’ “And taking along with her as helpers some other nuns, she went outside the convent. When she saw her sister waiting outside the gate, instead of feeling compassion for her for having been wounded by the soul-destroying enemy, instead of sharing her pain, embracing the kissing her, and taking care to heal her wounds, and leading her to repentance and confession, thereby saving her, she dashed against her like a lioness. And aided by other nuns, she struck her in the face, on the head, wounded her seriously, and with wild shouts and threats drove her away. ‘Go away,’ she kept telling her, ‘you foul harlot, who came here to the convent, to this holy place to defile it also. Go away, I will kill you, to wash away the shame you have brought to our family.’ She replied: ‘I erred, forgive me, my sister, don’t you share my pain?’—’No,’ she replied, ‘you are not my sister, you are a harlot.’— ‘Where shall I go?’ asked her sorrowful sister. ‘Go and drown yourself, go and kill yourself,’ replied the other.

“The miserable girl fled from the convent full of wounds and bloodstained. When she was about 800 yards away, she sat down by the road, weeping bitterly; and groaning painfully she said: ‘What shall become of me the wretch? Where shall I go, when even my sister, to whom I hastened to seek help and consolation, drove me away, wounded me, and filled me with despair? There remains nothing for me now but to go and drown myself in the sea! O my God, help me the wretch.’

“Through the dispensation of God, Who does not want the death of the sinner but his repentance, it happened that St. Arsenios was going up to the convent. When he saw the girl crying and wounded, he felt compassion for her, and approaching her he said: “What is the matter, my child? Why are you weeping? Who has caused you the wounds?’—’My sister, Elder,’ she replied, ‘together with some nuns.’— ‘And why did they wound you?’— ‘Because, Elder, some corrupt men and women led me astray, and I became a harlot. But I realized that I did not do well and I came to the convent to seek protection, help, from my sister. And behold, Father, what they did to me. Is that the way nuns act, having fled from the world in order to save their souls? What do you, Father, counsel me? To go to the sea and drown myself, or to go and hurl myself down a precipice?’ T, my child, do not give you such counsel. I love you as my child, and if you wish I shall take you with me and heal the wounds of your soul and body.’—’And where are you going to take me, Elder?’—’To the convent, my child.’—T beg you not to take me to that convent, where my sister is together with those wicked nuns, because they will kill me—they declared this to me clearly, and if I insisted on remaining there they would certainly have killed me. You, Elder, are a good Father, but those nuns are criminals.’

“Come, my dear child, and be not afraid, they will not kill you, because I shall turn you over to Christ, and no one will be able to harm you.’—’In that case, Elder, since you are going to turn me over to Christ, I am not afraid of them, because Christ is much more powerful than they.’

“After he had encouraged and consoled her, St. Arsenios took her by the hand and led her up to the convent. And like another good Samaritan, by means of fatherly and affectionate words he exhorted her to repentance and confession. When she had repented sincerely and confessed candidly, he cleaned and dressed the wounds of her body and soul. Having clothed her with clean garments, those of repentance, he introduced her into the spiritual fold of the convent and included her with his other rational sheep.

She made such progress in the monastic life — in fasting, self-control, vigils, prayer, temperance and the rest of the virtues, and in the keeping of the Commandments of God — that she surpassed all the other nuns. Thus there was fulfilled the saying of the divine herald Paul the Apostle: “Where sin abounded, grace did much more abound.”

Wishing to correct the nuns who had acted wrongly towards her, the Saint called all the nuns into the church of the convent and sharply rebuked those who wounded her, especially her sister, saying: “The good father of the parable, upon seeing from afar his prodigal son — who had spent his whole life living prodigally — returning to him, hastened to meet him, embraced him, kissed him, took him to his house, removed his old garments and clothed him with new ones and new shoes. He rejoiced greatly, because his son was dead, and was alive again, he was lost and was found. Christ came down from Heaven not in order to save the righteous, who have no need, but sinners. He came to save the lost sheep. He mingled, conversed and ate with publicans, harlots, sinners, towards whom he showed His love and affection. In this manner, that is, through His love, He saved them. But you did the opposite. Although you knew that the incorporeal wolf, the devil, had seriously wounded her soul, instead of feeling sorry for her, and running to embrace and kiss her, to rejoice, to save her from the danger of further sin, you felt hatred for her and ran to kill her. And because you were unable to kill her, you incited her to go and kill herself, to drown herself in the sea. Now learn from me, your Spiritual Father, that you are not nuns, you are not Christians, you are not even human beings. If you had a sheep and saw that it was at a precipice and was in danger of perishing, I think you would have hastened to save it. Why? Because it is an animal. If you show so much concern for an animal, should you not have shown concern for your sister, who is not an animal, but a human being, has a soul, which is worth more than the whole world? She was on the precipice of perdition, and although she came to seek your help, you pushed her so that she might fall down faster.

“Therefore, you are devoid of compassion, devoid of affection, devoid of sympathy; you are murderesses. For this reason I impose upon you the penance of not receiving Holy Communion for three years, if you do not recognize the great sin which you inconsiderately fell into. Repent, confess your sin, sigh, weep bitterly, and ask for forgiveness from God, from me, your Spiritual Father, and from those sisters who did not agree to your sinful act.”

Inasmuch as the nuns became aware of their sin, repented and wept bitterly, St. Arsenios forgave them and moderated their epitimia. Upon the sister, he imposed the penalty of not receiving Holy Communion for a year, because she provided the occasion and cause of the sin, while upon the others, that of not partaking of Holy Communion for six months, because they shared in the responsibility.

This story appears in Blessed Philotheos Zervakos’ book Life, Conduct, and Miracles of Our Father Arsenios the New, which was first published in 1960 and has been reprinted many times. I translated the story into English for inclusion in my book St. Arsenios of Paros, and present it here because it constitutes a very instructive and powerful lesson for priests with regard to the extremely important Mysterion of Confession and to imposing the proper penance on sinners for their spiritual therapy.

In another book of his, Blessed Philotheos has this to say about a good Confessor:

“The good Confessor’s manner, the cheerfulness of his face, the fatherly affection with which he receives the sinner, the sweet language of his teaching, the courage which he gives to the shy, the consolation which he offers to those who have committed many sins and are in despair, citing the example of any who repented and were saved—all these are conducive tosincere repentance and confession of the sinner…. It is to such Spiritual Fathers and physicians of the soul that the sinner ought to entrust the therapy of his soul.”

We may call the principle involved here “the Principle of Assimilation.” Contemporary psychoanalysis terms it the “Principle of Identification,” and calls attention to instances where this principle operates in a negative manner. 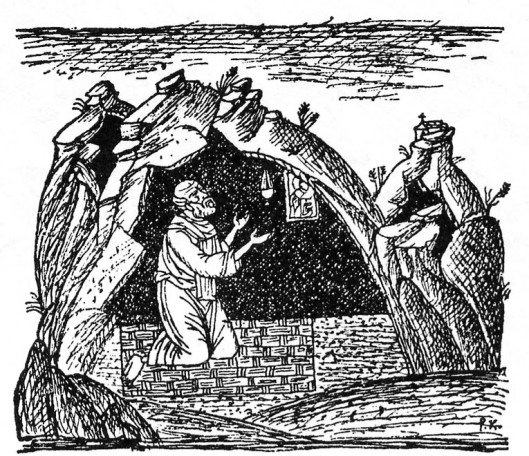 St. Basil the Great, Archbishop of Cæsarea in Cappadocia

St. Basil the Great, Archbishop of Cæsarea in Cappadocia
Saint Basil the Great, Archbishop of Caesarea in Cappadocia, “belongs not to the Church of Caesarea alone, nor merely to his own time, nor was he of benefit only to his own kinsmen, but rather to all lands and cities worldwide, and to all people he brought and still brings benefit, and for Christians he always was and will be a most salvific teacher.” Thus spoke St Basil’s contemporary, St Amphilochius, Bishop of Iconium.
Comments
×