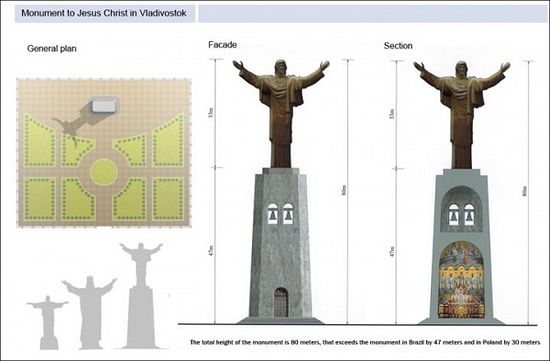 Towering 80 metre monument to 'Christ the Teacher' by Zurab Tsereteli to find home in Vladivostok.

The statue was cast in 2013 by Tsereteli, the famous Georgian-Russian sculptor, known for his gigantic projects such as a statue of Peter the Great in Moscow and ‘The Tear of Grief’ in the United States, dedicated to the struggle against world terrorism.

The monument stands 50 metres taller than the world famous ‘Christ the Redeemer’ in Rio de Janeiro, and two metres higher than ‘The Christ the King’ in Lisbon.

In Vladivostok, the monument will be composed of two parts: the statue itself and the pedestal housing a cathedral in honour of Archangel Michael.

Organisers say the monument, which has the backing of the Orthodox Church, will boost tourism and encourage residents of Vladivostok to believe in God.

It is also seen as a symbol of the revival of the Russian Far East.