The Icon of Theotokos Carried to Gethsemane (+Video) 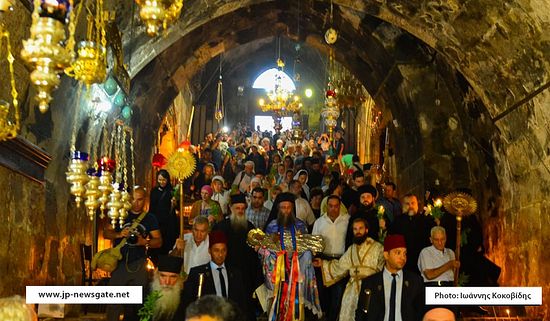 The procession arrives in Gethsemane

Before dawn on the morning of Tuesday the 12th/25th of August 2015, a procession began of the icon of the Dormition of Theotokos, from the Dependency of Gethsemane opposite the Church of the Resurrection, to the Tomb of the Mother of God in Gethseman.

The procession was preceded by a Divine Liturgy at the Church of the Resurrection and the aforementioned Dependency. 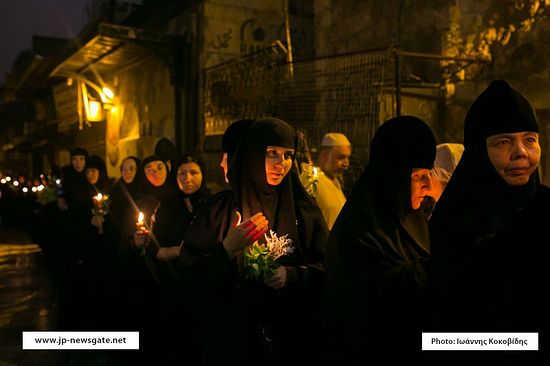 Upon the tolling of the bells of the Church of the Resurrection, the procession began with the icon carried by the Hegoumen at Gethsemane, Archimandrite Nektarios. He was surrounded by Hagiotaphite Fathers, Primates and Hieromonks, and Archimandrite Bartholomew, Assistant Dragoman and Master of Ceremonies. A long row of monks, nuns and faithful walked ahead, as a crowd of Christians, Orthodox and others, both locals and pilgrims, elderly, young and children, stood on both sides of the street in order to venerate the icon. Amidst troparia to the Theotokos, the procession crossed the Via Dolorosa to Gethsemane, where it paused for a supplication at the St Alexander Nevsky Church of the Russian Church, near St Charalambos Monastery, before the Monastery of the Praetorium, the Monastery of Sts Joachim and Anne and the Monastery of St Stephen, before arriving at the Church of the Dormition of Theotokos in Gethsemane. 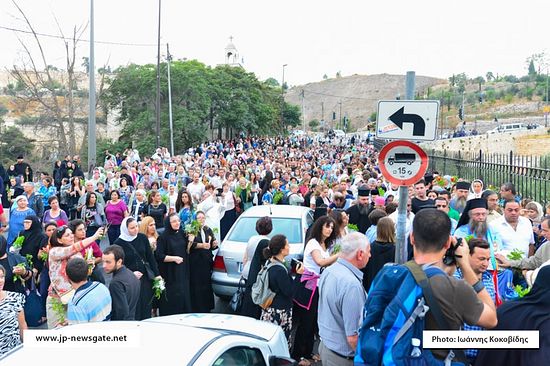 There, the icon was placed on an Epitaph to the south of the Tomb of Theotokos, where a supplication was made, followed by a Divine Liturgy attended by hundreds of pilgrims and locals asking for the mediation of Theotokos. A Strange Scene in the Icon of the Dormition
In many icons of the Dormition of the Theotokos, one can see a strange scene near the bottom: an angel invisibly cuts off the two hands of a certain man. What is the story behind this scene?
Comments
×