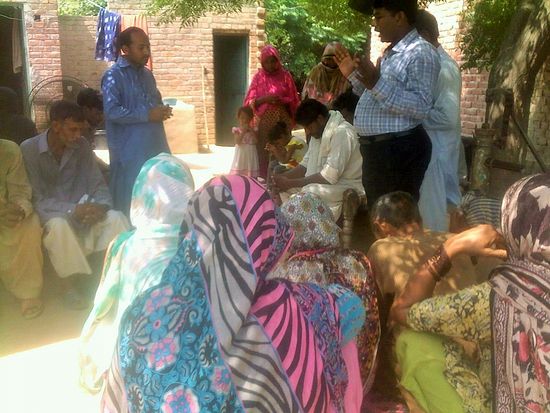 As torrential flooding spanned across various regions of Pakistan this summer and washed away thousands of homes, Christians in Kasur have received very little humanitarian aid and have been left to starve if they don't convert to Islam or become modern-day slaves in order to receive help from Muslims or the government.

Wilson Chowdhry, the president of the British Pakistani Christian Association, told The Christian Post that there are more than 60 Christian families in the western Pakistani region of Kasur that have lost their homes and all worldly possessions when the deluge hit this summer and washed their mud homes and everything inside them away.

While Muslims in the region have benefited from temporary shelter, clean water and food provided by Pakistani government agencies and Muslim charities, Christians have largely been without those bare necessities and medication needed to fight illnesses that can occur after flooding.

Chowdhry explained that some Muslim charities are giving Christians the option to convert to Islam and renounce Jesus if they want to receive help.

"We are are aware that this community has previously been offered aid from Muslim charities if they convert but they never accept conversion. They hold strong to their faith. They believe God will be their provider," Chowdhry explained. "These families have literally been struggling without food. Churches have opened up their doors but can't provide them much aid because the churches themselves in the region are struggling. We are talking about a very rural part of Pakistan."

Chowdhry added that as desperation started to get the best of the Christian population in Kasur, many Kasur Christians ended up signing bonded labor contracts in order to receive aid from Muslim landlords before BPCA arrived in the region.

"We have come in very late. We first went to Layyah and Gilgit, but if we could have arrived [in Kasur] seven days earlier, there could have been more lives that we potentially could have saved from this modern-day slavery," Chowdhry said. "Several families have already now signed contracts, which has now made them slaves for their Muslim landlords."

"I was shocked at the immense devastation before me it was a lot to take in," Aziz said in a statement. "People are in real desperation and children are starving. I am surprised and shocked at the lack of help from Pakistani authorities."

As flooding has become a consistent problem for Pakistan over the last five years, Chowdhry said it "is not unusual" for the government to overlook helping the Christian communities.

"When it comes to flooding of Christian communities, the government seems to back away. Whereas with Muslim communities, they go straight in there, so do the Muslim charities," Chowdhry said. "Muslim charities depend upon their Muslim supporters for their donations to continue. So, helping Muslims helps support their particular group and the publicity that it generates for them."

"I'm sure there is more, but these are the 60 families that we are going to be able to help. Anything larger scale than that, we are going to need to have a lot more resources," Chowdhry asserted. "They will literally be eating bread for the duration of the time that we are helping. That's what we can provide. It is a very basic but healthy enough to help them continue in the sustenance they need."

With donations from an unnamed African church, BPCA also plans to build three water pumps in the region to help get those communities access to fresh drinking water.

BPCA would love to provide more for the distressed community in Kasur, but only has enough funds to provide what little the organization can. BPCA started a fundraising effort to help Christian flood victims, however, the effort has only raised the equivalent of $392.

"To be honest with you, Christians and their lack of support, its very frustrating," Chowdhry admitted. "We do what little we can with the donations that are coming through. We are giving very basic meals at the moment. Luckily, we have the funding for the pumps from another group. People really need to dig down."

"In Matthew 25:40, which goes something like the King will say, 'When you have done it for the least of these, my brothers and sisters, you are doing it me,'" Chowdhry recited. "People need to kind of reflect on that, as Christians we need to help the needy."

Chowdhry is also calling on the Pakistani government to stop ignoring the Christian community and put in place infrastructure that will help limit damage caused by flooding.

"Our dams are outdated. There needs to be more dams restored. They need to be larger-size dams, those that would work more efficiently," Chowdhry argued. "In tandem with this, there has to be a more coordinated approach toward the damn infrastructure with India." Pakistan: over 40 people arrested in killing of a Christian couple
According to the media reports, the Prime Minister Muhammad Nawaz Sharif made a special statement in connection with the crime that had shaken the whole of province Punjab.
Comments

debbie1/13/2016 12:48 am
If they don't let her go, God will make it up to them. He will not even give them a court date for judgement, They are already judged for their crime against not only her but all Christians and they will suffer very brutal second eternal death. Its too late to wait to find out about Christ after you die here, so be beware, there is no forgiveness once you die
.