The subject of this interview is a Danish journalist and theologian who hosted a series of five programmes, entitled “From Russia with Love” on Danish national public service radio, Radio24syv, with the sub-heading “An Unbiased Look at Putin's Russia.” 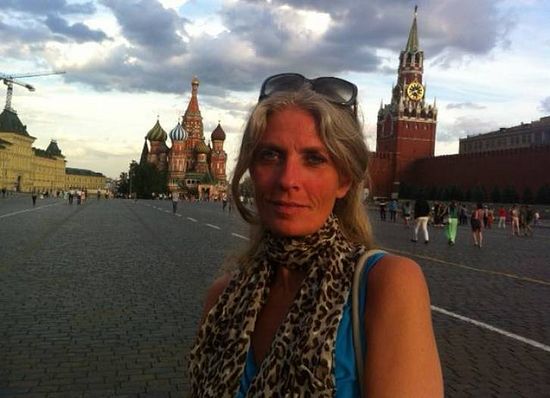 Thranholm on a recent trip to Russia

Inspired by Emperor Constantine, she believes Christianity in the West can be rejuvenated by looking to the East. Iben is aware of the sheer enormity of this task. “Such, alas, is the depth to which Western hatred for Christianity has sunk,” says the theologian, who does not hesitate to defend President Putin, on whom the Western media delights in heaping derision and scorn.

“The Pussy Riot case opened the door to Russia for me,” she explains.

“I understood that Russia is a country that refuses to compromise on Christian values. Russia is not just a country or a nation, Russia is a spiritual concept, a state of mind. Criticism of President Putin was not the crime for which the activists were tried and convicted. Their crime was the invasion of the Christ-The-Saviour Cathedral, the holiest of places, and engaging in a blasphemous act in front of the iconostases.

In the West, freedom of speech is widely deployed for the purpose of desecrating religion, but Russia does not permit crossing the line into blasphemy. That really fascinated me, and so I travelled to Moscow to learn more and this eventually resulted in a series of radio programmes trying to help Danes move beyond the tedious and unhelpful caricature-like clichés and provide them with a nuanced view of Russia.”

What was your impression of Russia? 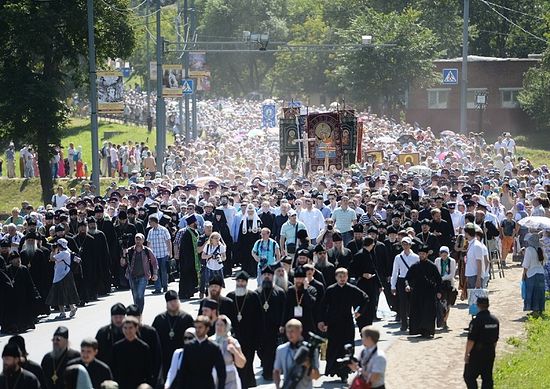 Cross Procession in Honor of the 700th Anniversary of St. Sergius of Radonezh

“I experienced a fantastic energy, a moral energy similar to America in the '50s with the old moral values. I met helpful, poetic and cultured people with a spirit of self-sacrifice I have not seen before. The atmosphere in Moscow is completely different from that of any capital in Europe, and unlike here in the West, I feel much more spiritually free in the East.

While the West is deriding and disowning Christianity and Europe revels in self-loathing, Russians are returning to Christianity in a modern and contemporary context. Bear in mind that Christianity was suppressed under Communism, which was atheistic. Russians are familiar with the bitter fruit of atheism and have no appetite for the bleak and barren wasteland it produced. 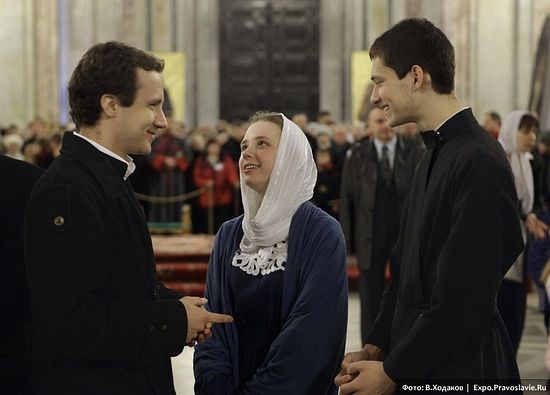 “The young, the hip, the wise and the wealthy, express their Christianity as a completely natural and straightforward thing”

The interesting thing is, that in Russia, Christianity is associated with being modern and progressive. It is the spirit of the young, the hip, the wise and the wealthy, who express their Christianity as a completely natural and straightforward way of life. Christianity is simply fashionable, but not in the superficial Western pop manner. Christianity’s roots grow deep in the soil of Russian life, and they look with amazement at how we guard, or rather, disregard, our spiritual heritage.

Not only that: They discern in our obsession with political correctness, and the social liberal opinion policing of the general media and academia, a new manifestation of the terror of totalitarianism they counted themselves blessed to escape after 75 terrible years.

But Communism and Social Democracy are probably not the same?

“Let me put it a different way. During the rule of Communism, Russia found itself in the grip of a culture of death, but she is returning to life, in the sense of Christian culture with a strong awareness of the historical roots and continuity.”

The situation in the West is the complete opposite. We celebrate death and have surrendered to the satanic view of man in a self-righteous rage and rant against God. We can divorce with ease on-line. We prioritise work and career above family responsibilities especially raising children. We favour euthanasia, abortion on demand, homosexual rights and same-sex marriage while our cities are submerged in Islam and growing segregation.

Russia has chosen a completely different direction, and it is one of the reasons that many Russians perceive activists like Pussy Riot as latter-day Bolsheviks. They invade and desecrate the sanctity of the church, a holy place. The West celebrates this as progress and prosperity. Russians are reminded that the spirit of communism is still alive. It merely assumes new forms and takes up residence in the West, where liberals and progressives love and adore Pussy Riot.

Today, the spirit of communism shows itself in western worship of human rights, freedom of speech and the elite’s utopian notions of so-called open societies. We are headed for the very wasteland that the Russians were relieved to leave behind. Patriarch Kirill has warned the West: “Do not take the path we took. We tried it and it leads to destruction!” 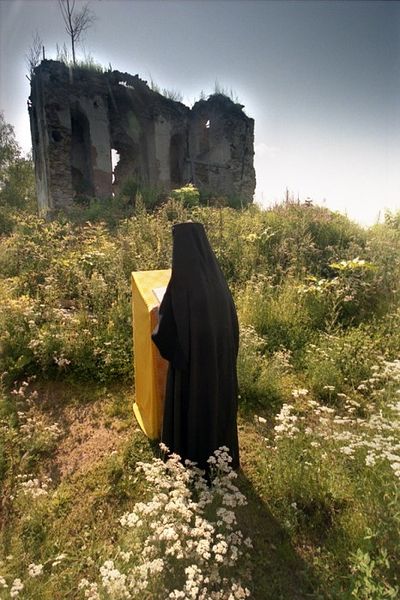 Recently the Russian military held an exercise based on the scenario of an attack on northern Norway, Aaland, Gotland and Bornholm. Do we just turn the other cheek?

“Well, that's not the true way to look at it. The Russians hold such an exercise because of the geopolitical pressure that NATO creates by deploying hostile military forces along the Ukrainian border and in the old Warsaw Pact countries.

Russian foreign policy has long been demonized. Russia is compelled to respond to a situation it did not create, which is not the same as aggression. Why should Russia accept being cut off from access to the sea, from Saint Petersburg to Vladivostok? Such a thing is unthinkable. With bald-faced hypocrisy, the West makes it look like Russia is our new enemy. The truth is exactly the opposite. The West is its own worst enemy.

Charles9/22/2019 9:22 am
Hello. I'm an American Catholic of Irish decent. I appreciate the fact that President Putin is reviving Christianity in Russia. I deeply admire and support him. But I hope that, in the future, he tries harder to heal the rift between Orthodox and Catholic Christians. Now is the opportunity because we have a good Pope. The Catholic and Orthodox Churches split a thousand years ago, but what power our Lord Jesus and His Holy Mother would have on this earth if these two churches were reunited again! I say this because the unity of world Christians is the only solution to the domination or destruction of the world by Zionists and Islam, the two most insane religions in this world. The teachings of Christ lie in the first four books of the New Testament, Matthew, Mark, Luke and John. But if no "Christians" read these simple and deeply comforting four books, our religion will be nothing more than a tool. And God will judge those who abuse it so.

Sally Iloff11/25/2016 11:33 am
God resistant pride people but to humble shows blessing. Something similar said App. James, Lord's brother, in the New Testament. The exceptionalezim is pride in pervert form. American churches, as they function as Evangelical today, in America pump the mind if Americans with Christianized form of exceptionalezim, than schools do in secular form. For that reason the average Americans do not go to church despite proclaiming themselves Christians. Instead of national repentance fro the pulpits is protected religious exceptionalezim. The Orthodox Faith is different. That's the reason Russia experiences such a great Revival and God's grace!

Father Nicholas Young8/23/2016 8:44 pm
To Jan Jones: In the West the children you find in Russian orphanages might never have been born at all . . .

Not perhaps the best solution to unwanted pregnancies, but absolutely better than abortion.

I am now curious to find out how many children live in North American orphanages.

jan jones10/22/2015 3:02 am
If this is true, then why are there over 250,000 children in orphanages in Moscow? And when the alcohol rate went from 15.76 litres, fourth highest volume in Europe in 2011 to 13.5 litres in 2013 it was because of government actions (banning spirits and beer trade at night, raising taxes, and other measures) not because of a spiritual revival. There has to be more of a Christian witness than just government policy. Spirituality isn't found in legislation, but in the lives of the people. 'Political correctness' in America, maybe, but neither is Russia a stellar example of a Christian culture. And, just for the record, the cities in Denmark may be sinking into Islam, but I live in Virginia and as far as I know we are still basically an Episcopalian society with a Jeffersonian twist.

I am not doubting the information in this article about the return to church in Russia, but I am not buying the swap of Russia for America leading the way in the Christian world. We both have a long way to go and we both have historical and cultural histories that decry Christian values being expressed in either the norms or mores of the societies. If you want to know who's leading the Christian world in spiritual power...you need to take another look at the church in China!!!

Mark Citadel9/13/2015 1:23 am
I would sooner see all of Europe under the administation of the Third Rome in Moscow than see it destroyed by the enemies of God!