The Faces of a People: The Serbian Cemetery of East L.A. 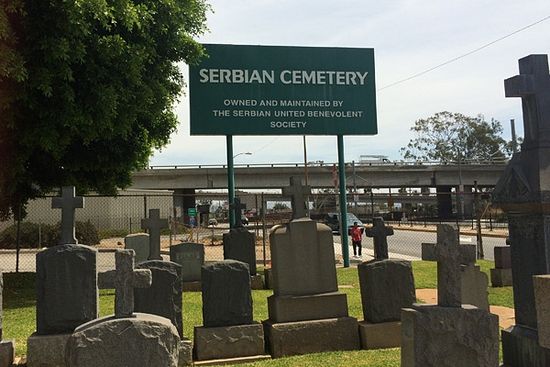 The Serbian Cemetery is in a little corner of hardworking, industrial East L.A. Surrounded by busy freeways and other graveyards, it is enclosed by a chain link fence. The day I visit, I walk alone among the neatly cared for stones -- many in the shape of the Orthodox cross. The faces of a community stare back at me. Tiny portraits, spanning the past 100 years, are affixed to the stones, except in rare cases where they have been pried off. There are little children, beautiful young women, and old couples smiling as they stand side by side. Around newer graves, trinkets have been left for the dead, and in one corner of the cemetery, there is a chicken coop. Friendly chickens walk around the cemetery, proudly pecking at the grass and squawking at each other. Across the street, Saint Sava Serbian Orthodox Church sits virtually empty. But once, it was the center of the Serbian community.

Surviving in a New Land

During the late 19th and early 20th centuries, a wave of Serbians, primarily from Montenegro, Vojvodina and Hercegovina, came to Los Angeles. Many came in search of greater economic opportunity. Iliya Cheyovich, a member of the Serbian United Benevolent Society (which runs the cemetery) and St. Sava, remembers the stories told to her by her late father-in-law George Popovich:

[Popovich] was probably the first baby born to the [Serbian] settlers who initially inhabited the area around North Broadway, commonly known as Bunker Hill. This was in close proximity to the Union Station, whereby it was easily accessible to the newly arrived. These early arrivals were mostly bachelors who roomed in the boarding houses. As marriages transpired, either by mail-order or by arrangement, they felt an intense need to have a place where they could meet, socialize, and preserve the customs and traditions of their homeland. They were proud to be Americans but they wanted the children to retain their heritage. One of the group had some land at 2nd and Humpheys, and a group was formed to purchase this property. This caused the majority [of Serbians] to move from the downtown area to East L.A. Thus, this area became the center of the Serbian colony. They were within walking distance of the proposed church and burial grounds. So St. Sava became the crux that united these people and helped them survive in the new land.

The Serbian Benevolent Society was formed in 1903. Soon after, they bought the land for the cemetery. In 1908, the Very Reverend Father Sebastian Dabovich came down from San Francisco to consecrate the grounds. Dabovich was called "the Father of Serbian Orthodoxy in America," and is now an Orthodox saint. The first Serbian priest born in America, he also organized the first Serbian church in America. It is said that he baptized more folks that any other Serbian priest in the Western Hemisphere. With such an august guest consecrating the grounds, the solemn ceremony quickly turned into a community festival:

The occasion turned out to be a great celebration rich in Serbian tradition, consisting of barbequed lamb, kolo, gusle and songs. One of the members watching this celebration joyfully made a comment: "Blessed be the one, who will be the first to be buried in this cemetery." Within a short period of time, he became ill and died. He was the first to be buried in this cemetery in 1909. Petar Bakoc's gravestone can still be found in the left east corner of the cemetery.

With the cemetery up and running, the Serbians now focused on building a church and events hall. In 1910, the St. Sava Chapel was completed on a plot across the street from the cemetery. It was named in honor of Saint Sava (1174-1236), a medieval prince and monk who is considered the founder of the Serbian Orthodox Church. In 1910, Father Dabovich returned to consecrate the chapel, which was the first Orthodox Church built in Southern California. (In 1927, St. Sava officially became part of the Serbian American-Canadian Diocese.) The hall and chapel immediately became the center of Serbian social and religious life in Los Angeles.

By 1910, around 2,000 people of Serbian heritage lived around the cemetery and church. According to Iliya Cheyovich:

These immigrants were people of very limited schooling but possessed strong moral fiber. There may not be any persons of remarkable fame buried here but they produced law-abiding offspring who also inherited noble traits of a strong work ethic, respect for others and close family ties. However, they made an enormous impact on L.A. 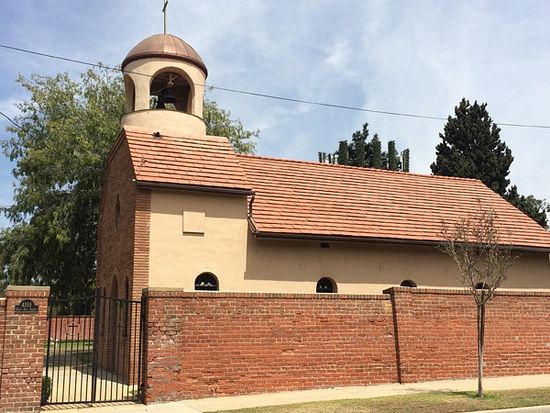 One of the major ways the Serbian population contributed to Los Angeles was through their construction work. "At one time, the entire Southern California construction [business] was dominated by contractors and workers of Serbian heritage," Cheyovich explained. "The freeways, pipelines, sewer drains and street projects have barriers inscribed with the names you see in this cemetery. They helped build Los Angeles." Their numbers increased after the destruction and economic ruin of World War One forced more Serbians out of their homelands in search of a better life.

A particularly interesting refugee was His Serene Highness Prince George Imerentinsky. A handsome Georgian royal, he was a prince of the Bagrationi dynasty of the Imereti. He grew up in Moscow and became a page of honor to the Russian Czar in 1892. After a military career as a lieutenant colonel, he went into exile after the Russian Revolution. He settled in Los Angeles, one of a number of former royals and aristocrats to do so. He died in 1932, and was buried in the Serbian Cemetery, a simple flat stone the only marker of this once highly decorated man.

By the early 1950s, more and more Serbian-Americans (including many new immigrants fleeing communist regimes after World War Two) were moving to the more hospitable, middle-class suburbs of the San Gabriel Valley. In 1963, a new church hall was built in San Gabriel. Services and activities were increasingly moved to the new hall. In 1984, a grand new St. Sava Church was built in San Gabriel. The old St. Sava continued to be used, primarily as a funeral chapel. The cemetery remained the main resting place for Serbians in the Los Angeles area. Holy men of the Serbian Orthodox Cemetery were buried at the cemetery, including Bishop Gregory Udicky, Father Vladimir Mrvichin, Father Marko Malovrazich and Father Mirko Vuisich.

I can only say that the early pioneers would be so proud that their sacrifices were not in vain. The membership and officers continue to strive to perpetuate ideals that they had instituted. They maintain intense fervor to maintain the grounds as they were intended. Each year, we have a number of burials but we continue to initiate new members who are desirous of participating and also choose this as their final resting place.- Iliya Cheyovich

As the cemetery's population continued to expand, the area around it continued to change. The neighborhood surrounding the cemetery is now primarily Latino, and heavily industrial. According to Father Petar Jovanovic, the jovial priest who heads St. Sava Church, the last Serbian woman who lived near the cemetery died around ten years ago. There are currently 2,692 people buried at the cemetery. With land almost running out, the Serbian Benevolent Society plans on building a mausoleum to house more parishioners. 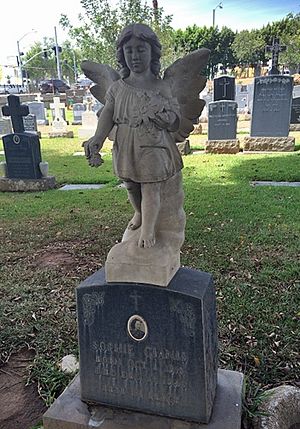 The cemetery is also home to a significant population of chickens. Although no one is sure how they got there (many say they were dumped there as little chicks), they have become a beloved part of the family. "As long as we've been coming -- which is my whole life -- the chickens, I remember them being here," Helen Djukic told a reporter for Curbed LA. "It's very natural for the chickens to be here. I love that the chickens have a safe place to roam and eat the grass. It's fantastic. It's like a sanctuary here."

The caretaker at the cemetery, Jose "Pedro" Guevara, takes care of the chickens. "They give him eggs," Father Jovanovich explained. "He has a good breakfast there. They live there all seasons, winter or summer. People don't mind -- it's cute to see them."

Father Jovanovich also plans to be buried at the cemetery. "I am going to retire next year and since I am going to move to Las Vegas to live, I am trying to buy a plot for myself and my family in the cemetery, since I am known by people here," he said. "I served this church for 36 years, so everybody knows me here. If I was buried in Las Vegas, nobody would know!"

This sense of belonging has tied the Serbian community to this cemetery in East L.A. for over 100 years. There will always be a visitor who recognizes your face, or remembers your name. Australia: Historical day for the Serbs south of Sidney
On the occasion of this celebration, the mayor of Wollongong Mr. Gordon Bradberry and other representatives of the city of Wollongong, the Parliament of the New South Wales, the Federal Parliament, educational and cultural institutions of the city participated in this solemn event.