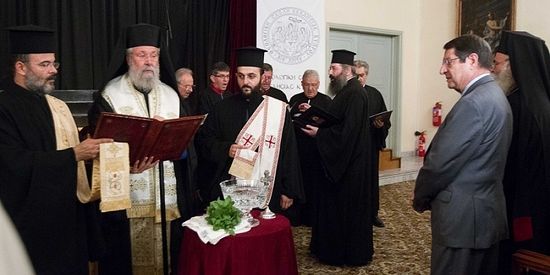 "The establishment of the Theological School of the Church of Cyprus comes at a time when our country is in need of shining examples," said President of the Republic, Nicos Anastasiades who inaugurated the School together with Archbishop Chrysostomos II on the grounds of the Archbishopric.

"We express joy and jubilation because we see our ardent desire," he said, "fulfilled."

"The theological school will aim to promote religious beliefs, to educate about Christ and to instil in the hearts of the clergy the desired ethos," he added. "It will promote scientific education and solemn life and the cultivation of critical thinking."

President Anastasiades said that the Theological School of the Church of Cyprus was "founded during a difficult and crucial time for the future of our country."

He said it comes at a time when our country is now in need of shining examples. It will remedy its moral standing and regain its freedom and dignity at all levels.

The President pledged that the government will stand by the new school and support the Church of Cyprus in this effort.

In his message, which was read during the ceremony, Ecumenical Patriarch Bartholomew said that he was deeply moved and satisfied to be informed of the decision of the Church of Cyprus to found a theological school.

The Ecumenical Patriarchate, as guardian of the living theological truth, looks forward to the efforts of the Theological School of Cyprus.

He also congratulated Archbishop Chrysostomos and the Holy Synod and wished the school to become a centre of theological education and initiation of students in the spirit and ethos of the Orthodox Church.

In his address, the Director of the Theological School, Deacon Kyprianos Kountouris, said it was imperative to establish a school which aims to maintain university-level standards.

He noted that the school begins with a four-year undergraduate theology programme that was adopted by the competent bodies of the Ministry of Education and Culture and this year is offered to twenty-five students. During the first year of study there will be fourteen classes taught by ten teachers, two of whom will be visiting professors from theological schools of Greece and Lebanon as well as the wider academic world of Europe. Seminary on the island of Halki may be restored in exchange for opening of a mosque in Thessaloniki
Closure in 1971 of the Orthodox seminary on Halki deprived the clergy of the Patriarchate of Constantinople of most of the theological preparation in Turkey. Archbishop Chrysostomos II: Cypriots are victims of the Turkish invasion
“Cyprus, by its geographical position in the east of the Mediterranean, is the crossing-point of Europe, Asia and Africa. And its residents, peaceful and quiet people by nature, have over last forty years constantly fallen victim to the disorder brought here by the barbaric Turkish invasion."
Comments

Ven Amos Olusola FAREMI9/10/2019 8:25 am
I am a priest in the Church of Nigeria, Anglican Communion, i humbly want to ask if you admit priest from another country into your theological school in Cyprus? And to have a share of experience among you in the Church of Cyprus, if so sir , kindly guide me on the way to to go about this sir.
×