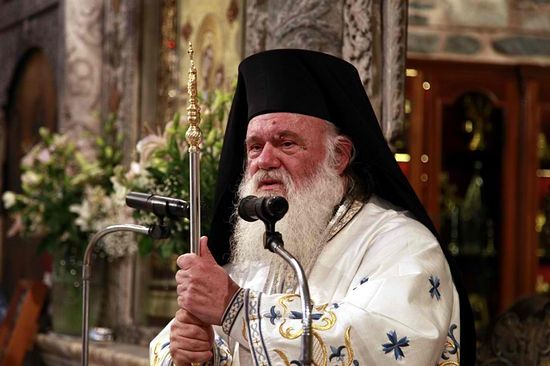 Archbishop Ieronymos II of Athens and All Greece accused Europe and the Greek government of trying to alter Christian Greek society and the identity of Greek people.

Ieronymos spoke on the occasion of a recent government proposal to make easier for students to be exempted from religious education classes.

“The recent incident regarding religious education classes is the tip of the iceberg, I’m afraid. It seems that our European friends — taking advantage of our dire economic situation and in light of changing the economic relations between us — will seek by all means to alter Greek society starting with our schools,” Ieronymos said, addressing the Annual Conference of the Holy Synod.

“The tragic thing is that our enemies are no longer far away. They are inside our walls. We can see it,” he said. The Archbishop referred to the reforms required by Greece’s creditors as part of the bailout agreement. He said that the Greek government has committed to a series of reforms and measures that are imposed by international creditors in order to “devalue Greek history and our traditions, tear down the institution of family, enforce perverted ideas, further degrade our language and show obvious contempt for centuries of our great civilization, our homeland, our faith.”

The Archbishop called on the faithful Greek people, the hierarchy of the Greek Orthodox Church and the clergy to defend Greece’s traditions and faith. He also called on the state to collaborate with the Church “with sincerity and consistency and to set an example to our people for cooperation and unity.” Hieromonk Timothy2/5/2016 5:17 am
What does the social-political actions of the Greek government or of other European governments have to do with attending and participating in the Synaxis in Geneva?

alex1/25/2016 4:04 pm
the hierarchy has all the blame, because in recent years nationalism and regionalism lack of culture of bishops has led to an ethnic selfishness, being the universal concept of constantly forgotten in church, some "bishops desperately accept all the garbage".

V Papas12/6/2015 6:10 pm
Shame on all the Greek people who would even suggest to take religion out of the schools in Greece. We, in the U.S. try very hard to take our children to Sunday School and Greek School so they may learn about our faith.
As a child ,when we visited Greece in the summers we would pick a monastery to visit each Sunday. We learned so much by doing this.
Greece must help teach our youth about our faith. We are the oldest faith in the world and we should be proud!
Throughout the years, in Greece, I noticed how many parents allowed their children to go swimming on Sunday's but not even stop into a church to light a candle.
The Orthodox people that are far from the Mother land are strong and united. We would love to have a Greek School in Michigan and take our children there like the Catholic churches have.
We are allowing the devil to take a very precious part of life away from our heritage.

Rdr Andreas Moran10/8/2015 1:48 pm
Not only Greek Orthodoxy but all Orthodoxy. The events in Europe since the 1990s clearly show this. The powers of this world cannot stand the truth and the Orthodox faith is the fullness of truth; it is the Truth which is Christ. Various Christian denominations have succumbed but as Christ said, the gates of hell shall not prevail against His One, Holy, Catholic and Apostolic Church.
×