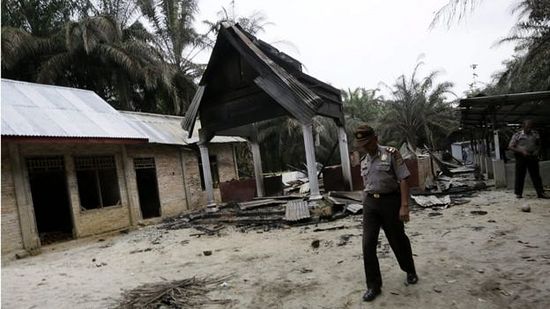 Churches attacked and one man killed in clashes in Aceh, Indonesia on Tuesday.

The Christian community in Indonesia's Aceh province is asking for prayers after a group of Muslim extremists torched three church buildings on Tuesday, killing one person in the process. The criminal acts reportedly followed a social media message spread by Muslim extremists on Friday urging others to take action against Christian churches in the region.

Open Doors USA President and CEO David Curry told the Mission News Network, "The Indonesian Christian Church (HKI) was burned down. Their pastor and the congregation have been greatly affected by this. We're asking people to know what's happening in Indonesia to support persecuted Christians there, to be praying for this church."

According to the BBC, a human rights group said the attackers then burnt down a second Roman Catholic church before torching a third church, where a man died in clashes with Christians defending the church and the police.

Curry explained that the crime was sparked by vicious social media campaign calling on Muslims to desecrate Christian churches, which they claimed were unlicensed: "Muslim extremists have been spreading a viral message about 'here's what's happening in churches' and sort of stirring up dissension."

He added, "With all of the technology available, there's more opportunity for people to stir up dissension, and (now) you have this incident in Indonesia, where this church was burned down."

Pastor Erde, whose church was also torched last month, told the news outlet that he recently witnessed hundreds of extremists pouring into the police and legislative offices to demand the closure of all churches in the area.

"Every church member is guarding their own church right now. Please pray that there won't be any more church demolitions today," said the pastor. There are about 10 churches in Aceh Singkil. Curry adds, "There's a lot of political pressure on police to overlook these incidents. It's a largely Muslim culture."

He added, "We're hoping that the police take firm actions to stop this violence, and also for Christians to respond with love and wisdom. So it's really a balance of things that we're looking for in this situation in Indonesia."

However, a report released by World Evangelical Alliance in September said that not enough has been done in Indonesia to curb persecution of religious minorities at the hands of Islamic radicals and charged that President Widodo's measures are too lukewarm to rein in extremists' threats.

"[President Widodo] does seem to have the will, as he recognizes that religious extremism is a serious issue, unlike his predecessor Susilo Bangbang Yudhoyono, who neither acknowledged nor did anything to control the growth of extremist groups," Christianity Daily quotes the report as stating.

The report further says that the president "seems to be working towards making the Indonesian society more tolerant, which, of course, is remarkable, but his efforts are not accompanied by strengthening of the rule of law."

"Since the beginning of his presidency, Jokowi has been implementing a cautious bottom-up strategy, which is needed to promote tolerance and moderation, while avoiding a direct confrontation with extremist groups," the report continues. "This perhaps explains why he has not been taking enough top-down measures required to improve law and order. And extremist groups seem to have little fear of action by the government yet."

Indonesia has the largest Islamic population in the world, according to the Pew Research Center, and ranks #47 on the the Open Doors 2015 World Watch List of the worst persecutors of Christians.

In light of the recent spurt in violence, Curry is urging the Christian community worldwide to unite in prayer for their brothers and sisters in Indonesia.

"Christianity is opposed in Indonesia," he said. " It is a very difficult place to work, but we need to be praying, we need to be going, we need to be interacting with and loving Muslims in that culture. I think we keep pressing forward, but we know what we're dealing with."