Museum of the Aleutians Closes, For Now, Following Furor Over Rare Books 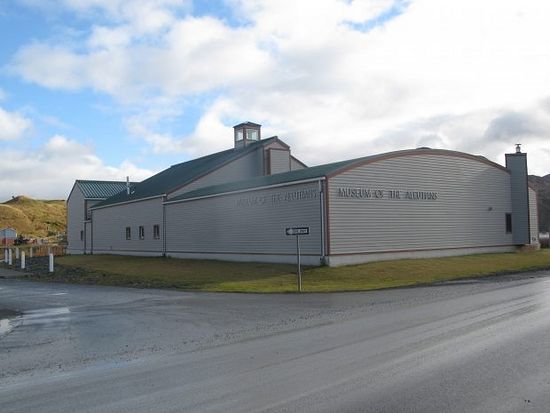 A museum in Dutch Harbor is closed for now after a Russian Bible from 1801 and two other historic books that had long been missing were found in the director’s house, sparking an uproar among residents who say the important items never should have been removed.

The Museum of the Aleutians board is standing by its longtime executive director, Zoya Johnson, and says it has found no evidence that she meant to steal the books, as some in the community of 4,700 have alleged.

The board, however, has put Johnson on indefinite paid leave as it seeks outside advice from collections experts who can provide an objective opinion on the unusual situation.

Current and former residents, including some who have donated works and artifacts to the museum, say their confidence in the museum’s management has been shaken.

“The code of ethics is black and white,” said Suzi Golodoff, a former museum employee who has donated traditional Aleut items. “There is very clear museum protocol here. Even if things go from one shelf to another, there’s always a record, so there is absolutely no way that this was excusable."

The loan paperwork claims the Bible was brought to Kodiak in 1804 by Hieromonk Gedeon on a round-the-world voyage. The other items hailed from the later 1800s: an Aleut-Russian hymnal as well as “Indication of the Way into the Kingdom of Heaven” by Innocent Veniaminov.

Johnson said she can’t remember how the books ended up at her house several years ago during a stressful period in her life, but she apparently took them home to return them to the now-shuttered Russian Orthodox Museum in Anchorage, which had loaned them to the Dutch Harbor museum.

Johnson was at a loss on where to return the books, she said. Complicating her efforts were problems in the Russian Orthodox church in Alaska in 2008 with the forced retirement of Bishop Nikolai Soraich, leading to turnover in the diocese and the departure of former museum director Mina Jacobs.

Also, the Russian Orthodox Museum in Anchorage closed in summer 2009, not long after her husband died in a bicycling accident in the Fireweed 400 contest.

Johnson believes she must have brought the books home and put them in the safest place -- a closet in her husband’s office where he once kept his guns -- with the intent of returning them by hand in the same manner she’d brought them to Dutch Harbor.

“I must have brought books there because I was getting ready to go to Anchorage, and all these things started happening,” she said.

She rarely visited the closet and did not know she had the books, she said.

“I have an excellent memory, I can quote conversations that have happened years ago,” she said. “But I just don’t remember those books. They weren’t a priority to me when I was trying to survive, keep the museum going, and bring a Museums Alaska conference here a month after my husband died.”

The books were discovered last month when museum employee Ingrid Martis was house-sitting for Johnson and giving her fiance a tour.

Martis said it was “human curiosity” that led them to open the door to the office and enter a closet containing the books, including the Bible with loan paperwork still inside from the Russian Orthodox Museum.

The museum's education program manager and a former collections manager, Martis said she was shocked to see the books, saying paperwork at the museum had long indicated they were missing.

She reported what she found to board chair Sharon Svarny-Livingston. After an initial internal investigation after Johnson returned to Unalaska, a four-member executive committee of the board agreed early this month to fully support Johnson. The board found that allegations against Zoya were “unfounded,” Svarny-Livingston said.

After that, Martis, who had intended to resign in November to return to France, quit her job earlier than planned, in protest, saying the board should at least have removed Johnson’s keys to the collection, she said. She added that any books leaving the museum must do so with proper paperwork, a measure that ensures items can be recovered even in the event of a sudden death, and this step was not taken.

“I just didn’t feel it was ethical,” Martis said. “It’s not what I stand for.”

Martis' departure was followed by the resignation of Sara Strain, collections manager. Strain did not return calls seeking comment. With Johnson on leave, the museum, which houses treasures such as a John Webber sketch from Captain James Cook's 18th-century voyage to Alaska, did not have the staff to remain open.

In the wake of Martis’ resignation, former museum officials and others have weighed in with letters to express their concern about the removal of the books and what it might mean for other treasures held at the museum, saying basic principles for the care of items have been violated.

“Under no stretch of the imagination would historic archival material be safer in a private home than in the collections room of the Museum of the Aleutians,” said Rick Knecht, the museum’s founding director, who now teaches at the University of Aberdeen in Scotland. “The climate-controlled, secure and professionally monitored environment is what the museum provides so that our collective heritage can be preserved for the public good.”

Last week, the board’s six members -- one seat is open -- decided to put Johnson on paid administrative leave. Johnson, who is also a city council member, earns $91,000, with more than half that salary coming from the city of Unalaska, according to the Dutch Harbor Fisherman.

The books are safe and back at the Aleutians museum, said board member Melissa Good. The board is now reaching out to museum experts outside Unalaska for an “unbiased” review.

“We don’t think there was criminal intent by any means. It was possibly a lack of judgment" stemming from a stressful situation several years ago, Good said.

The board will discuss next steps once more information is available, she said.

“It’s definitely not a good thing the books were not in the museum. That was a huge breach of protocol and we are trying to remedy it,” said Good.

Johnson, who said she stabilized the museum and increased funding and membership during her tenure, said she would have destroyed the loan paperwork if she wanted to take the books.

"If I were to steal things, would I keep the compromising documents?" she asked.

Golodoff said the items should have never been kept at the director’s home. That they were there makes her concerned about other precious items, including those Golodoff and her late husband, Ben, had donated, such as a rare Aleut kayak bailer about the size of a person’s forearm.

The "ingenious" wooden implement, made by John Golodoff, her late father-in-law, possibly a century old, allowed water to be sucked and dumped overboard, much like a kid captures water in a straw, she said.

“If she’s forgetful, or whatever, it’s just not an excuse,” said Golodoff. “A friend told me that would be like people at the post office taking mail home, or a city treasurer taking funds home and forgetting about them. This is worse because these things are irreplaceable.” Alaskan parish preserves faith, heritage with $24K Rasmuson Foundation grant
The Rasmuson Foundation, Alaska’s foremost charitable family foundation, has awarded a grant of $24,422.00 in support of the construction of the Elders’ Bell Tower at Saint Herman Church in King Cove, a remote fishing community of about 950 year-round residents located near the southern tip of the Alaska Peninsula. Church-museum opens in historic St. Petersburg shopping center
The newly-opened cultural complex, associated with the name of a merchant who became a saint—St. Seraphim of Vyritsa—will be located inside the Gostiny Dvor ("The Merchant Court"—a historic Russian term for indoor markets) shopping center in St. Petersburg.