Source: No Other Foundation 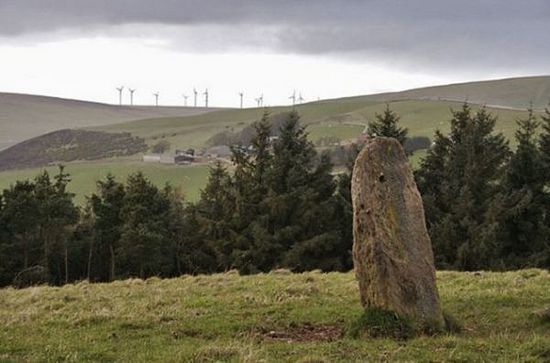 Part of the Law of Moses forbids moving the boundary marker. It reads, “In the inheritance which you will hold in the land that the Lord your God gives you to possess, you shall not move your neighbour’s boundary marker which men of old have set” (Deuteronomy 19:14). Moving the marker was a serious matter—so serious in fact that it was subject to a terrible curse in the corporate liturgy set out later in that Book: “Cursed be he moves his neighbour’s landmark”. And all the people shall say, ‘Amen!’” (27:7). This law also found an echo in one of the proverbs of Solomon: “Move not the ancient landmark which your fathers have set” (Proverbs 22:28).

What was deal with moving a neighbour’s boundary landmark? Those landmarks were stones set up to determine the boundaries of a neighbour’s property, and rich people wanting to expand their land at the expense of their poorer neighbours would surreptitiously move the landmark and redefine the boundaries which were previously set, thereby stealing their neighbour’s property. Because the act was hard to prove (for who could say where the stone originally stood?) the crime was often done with impunity—hence the terrible curse pronounced upon it. The one whose land was taken might not be able to obtain justice, but God saw where the landmark once stood, and He would avenge.

The Fathers regarded the Law as not simply an ancient document dealing exclusively with agricultural matters, but also as spiritual text, dealing with matters of the Kingdom. Thus St. Paul interpreted the law about not muzzling an ox while it threshed, but allowing it to eat while it worked, as not only applicable to oxen, but also to workers for the Kingdom: “Is it for oxen that God is concerned? Does He not speak entirely for our sake? (1 Corinthians 9:8f). In the same way, the Fathers also interpreted the Law’s proscription against moving the ancient landmark which the fathers had set as forbidding theological innovation. In his second Defense Against Those who Attack the Divine Images, St. John of Damascus applied that very law to the situation of his own day, saying, “do not be an innovator, ‘moving the age-old boundaries set up by your fathers’” (chapter 15). John knew that in the apostolic Tradition the Church possessed the authoritative divine teaching, which defined the spiritual boundaries of things such as Christology, icons, and idols—and, more importantly for us today, gender.

Today the ancient boundaries are being moved again, and the stakes in this contest are every bit as high as in the previous ones. Today voices are raised calling for the moving of the landmarks regarding the nature of gender and sexuality. In the original boundary marker, we were taught that gender was binary and divinely-given, an irrevocable gift from the hand of God. God made them male and female, and from this difference and complementarity family arose as God continued to create the human race. Gender difference and binary sexuality were absolutely basic to human nature. Certain rare medical conditions such as hermaphroditism aside, one’s sexual anatomy indicated one’s gender, which brought with it in turn the role one would play in the creation of family and in society. Occasionally of course psychological abnormalities might be found in young children, so that a young boy might feel that he was actually a girl, but these cases were recognized as the anomalies they were. The label for such a pathology in the traditional Diagnostic and Statistical Manual of Mental Disorders (“DSM” for short) was “gender dysphoria”.

As the homosexual community continues to press for radical redefinition of sexuality (i.e. as it continues to move the boundary landmarks further and further), the given nature of gender itself has now come under attack. At first that community simply asserted that homosexual practices were legitimate and morally equivalent to heterosexual ones. (Yet note even here the subtle change: before now the latter were simply regarded as normal and normative; by insisting on the further label “heterosexual” the homosexual community prepared the way for legitimizing homosexuality.) Then came a further development, where a person could legitimately be both homosexual and heterosexual, engaging in sex with both males and females. Now we see a further erosion, for the concept of male and female as binary realities itself is being challenged. And again we observe the same sanitation of language: such pathology and confusion is now celebrated under the new term “gender creative”. If a child or adult declares that they are a certain gender, well then they are, anatomy notwithstanding. Gender becomes a subjective choice, like a preference for one type of food or music over another. And such a choice now becomes a “right”—one enforced with all the draconian apparatus of the law. This is not so much moving the landmark stone as it is throwing it away completely.

Note too that it involves the tyranny of one community’s choices over the majority. If, for example, little Stan now feels he is actually Suzy, Stan now is allowed to use the girls’ washroom at school, and if the girls feel uncomfortable with sharing their washroom with a boy, their discomfort (and with it, their rights) are simply over-ruled. The same goes with the use of the gymnasium change-room. Perhaps change-rooms in schools today are halls of privacy and modesty, but it was otherwise in my day, when anyone sharing a change-room could survey the anatomy of the others using it. And even if some arrangements are available for some privacy there, who is to say how much privacy one needs? Should the girls showering in the change-room who feel reluctance to do so when Stan is sharing the facilities with them simply be forced to stifle themselves?

Current cultural trends are more and more insisting on such stifling (backed up of course by a generous dose of school-administered propaganda), but children are not always as easily stifled as all that—hence the propaganda. At the very least the ones doing the stifling should have the honesty to admit that the current rulings enforce the submission of one group (those who feel discomfort with such common arrangements) to another (the homosexual community pushing for gender re-definition).   The tyranny of those insisting on the redefinition is masked when the re-definition is heralded as giving to the trans-gender child its “rights”. Framing the debate in terms of rights in fact pre-determines the outcome in favour of those pushing for re-definition. No one wants to deny anyone their rights. But declaring that access to gender-specific facilities is a right presupposes that gender is not in fact binary. And that has not yet been proven, though it is increasingly widely declared.

Ultimately it is not about the individual feelings, discomfort, or rights of any one person or group, but the larger and long-term question about what gender will mean for our culture in the coming generations. Gender is the factory from which healthy family and personhood are manufactured, and if we drastically alter the factory’s machinery the product will be correspondingly altered as well, and in ways that we cannot yet foresee, and this will in turn produce difficulties hitherto unimagined. Compared with such changes and challenges, the discomfort of a single child when faced with using the “wrong” washroom pales into insignificance.

The question for Christians is this: is the apostolic Tradition which the Church has received authoritative, or not? Have we the authority to move the ancient boundary landmark which our fathers have set? Shouting that we now longer live in a binary world is not helpful, but is simply a form of bullying. It is true, of course, that we no longer live in a binary word, but for Christians, it is also irrelevant, for we also no longer live in a world which values the life of the unborn. The world is no longer binary, just as it no longer refuses to murder babies in utero. In other words, the World is still the World, and as such it refuses to abide by God’s Law. This is hardly surprising. The question about gender still needs to be dealt with. Scripture, the canons, the Liturgy, the experience of the saints, and in fact the totality of our Tradition assert emphatically that gender is indeed binary. For us, the rock remains. And as the old liturgy in the Book of Deuteronomy reminds us, we move it at our peril. Transgender Activist Claims Catholic Bishop Supported Transition to Female: Permitted to Teach Sunday School
A biologically male transgender activist who says he is now female is claiming that his transition is not only supported by his local Ukrainian Catholic bishop, but that he has been encouraged to continue receiving Holy Communion and has been assured that when he dies, he will receive the Christian Rite of Burial as a ‘she.’
Comments
×