Exhibition: Boris Godunov. From a Courtier to the Sovereign of All Russia 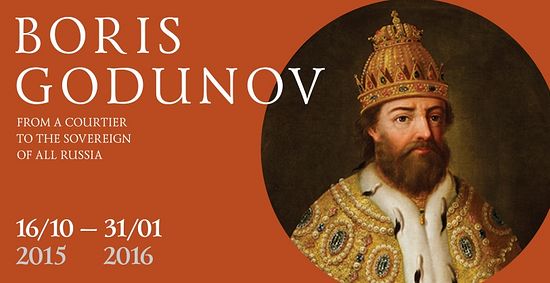 The exhibition Boris Godunov. From a Courtier to the Sovereign of All Russia opened on October 16th, in the Assumption Belfry and the One-Pillar Chamber of the Patriarch’s Palace of the Moscow Kremlin. It is the first exhibition dedicated to one of the greatest figures in the Russian history – Boris Godunov (1551-1605), who ruled the Tsardom of Russia as de facto regent from c. 1585 to 1598 and then as the first non-Rurikid tsar from 1598 to 1605. The end of his reign saw Russia descend into the Time of Troubles. He was a man of marked individuality whose amazing and tragic life has been attracting historians and specialists in literature for a long time. This sovereign’s image is depicted in various works of art, music, and drama.

The exhibition represents around 150 items, dating back to the turn of the 17th century, provided by the leading Russian museums – the State Tretyakov Gallery, The Pushkin State Museum of Fine Arts, The State Hermitage, The State Historical Museum and other museums, as well as the largest libraries and the Russian State Archive of Ancient Documents.

The exhibition highlights the milestones of Boris Godunov’s life, stages of his state activity and the most important aspects of his foreign policy, and it familiarizes the visitors with the rich cultural heritage of the Godunov’s epoch.

The display includes masterpieces of icon painting, book miniature, pictorial and decorative embroidery, jewelry and arms from the golden fund of the Russian art. Many of these remarkable exhibits, distinguished by the skillful execution and splendor of décor, are made by the order of Boris Godunov and his relatives. This certainly attests to fastidious taste in art of the representatives of this family, which added its own page to the history of the Medieval Russian culture. The exhibition also presents items of significant importance, such as written manuscripts, rare books and memoirs of witnesses of the events of that time. The core of the exhibition is formed by artifacts from the collection of the Moscow Kremlin Museums. They are key objects from the permanent display, such as the Monomakh’s Cap and the throne of Boris Godunov, as well as items from the storage, such as the Godunov's Book of Psalms with unique miniatures.

Extant monuments of the Godunov’s epoch form the single layer of the artistic heritage of the Muscovy, and characterize this historical period as the time of the flowering of the traditional artistic tendencies, brought to perfection by a vertuoso performance.

The exhibition Boris Godunov. From a Courtier to the Sovereign of All Russia runs from October 16, 2015 – January 31, 2016, in the Exhibition hall of the Assumption Belfry, the One-Pillar Chamber of the Patriarch’s Palace in the Moscow Kremlin. New Museum in Moscow to Host Permanent 'Orthodox Russia. Romanovs and Rurik Exhibit'
Paul Gilbert
The multimedia exhibition explores the history of the Romanov dynasty (1613-1917), and the Rurikovichi (the descendants of Rurik) and the 700-year-long history of the Ancient Rus. The exhibition was established under the auspices of the Patriarchal Council for Culture and organized by the Presidential Administration of the Russian Federation, and the Ministry of Culture of the Russian Federation.

Museum of history of Orthodoxy in North Caucasus opens in Pyatigorsk
The Holy Synod of the Russian Orthodox Church made the decision to establish this monastery in 1904. It was founded with the blessing of St. John of Kronstadt, who even marked this place with a cross on the photographs that had been shown to him. Some of the saint’s personal things are on display at the museum’s exposition.
Comments
×