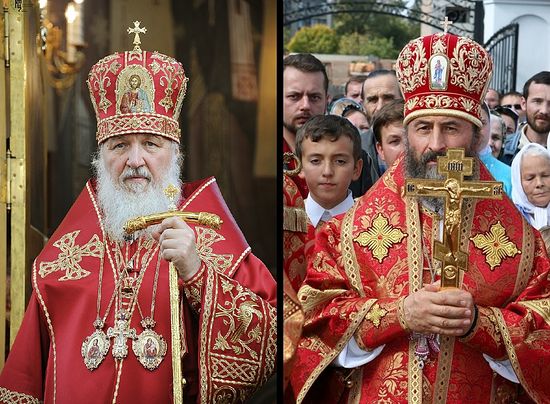 The Department for External Church Relations of the Moscow Patriarchate expresses its strong protest against the claims made by the Major Archbishop of the Ukrainian Greek Catholic Church, Sviatoslav Shevchuk, in an interview with Austria’s Kathpress agency. Like many other speeches of the hierarch, this interview is imbued with aggression against the Russian Orthodox Church and contains attacks on the canonical Ukrainian Orthodox Church, as well as politicized opinions on the tragedy unfolding in Ukraine today and insults to the Patriarch of Moscow and All Russia.

In a time when the Orthodox and the Catholics at various levels exert special efforts in order to get the dialogue back on track, the statements by the head of the UGCC bring deplorable dissonance into the process of this joint search, aimed at deepening mutual understanding and overcoming disagreements and bewilderments, accumulated over the past centuries. The unia, in the person of its first hierarch in Ukraine, manifests itself again as a sad survival of the time, when the Catholics and the Orthodox regarded each other not as allies, but as rivals.

As far back as 1990, members of the Joint Commission for the Orthodox-Catholic Dialogue made the following statement concerning the Uniatism, “We reject it as a method for the search for unity because it is opposed to the common tradition of our Churches.” In 1993, the Commission underscored that the Uniatism “cannot be accepted either as a method to follow or as a model for the unity which is being sought by our Churches.” It was noted that the attempts made in the past to restore the unity between the Eastern and the Western Churches by means of the unia had only aggravated the division (“Uniatism, Method of Union of the Past, and the Present Search for Full Communion,” Balamand, 1993, paragraphs 2,12,9).

Regrettably, the common condemnation of the unia by the Orthodox and the Catholics within the framework of the official theological dialogue has had no effect on the rhetoric of the Uniate leaders, which is as hostile to the Orthodoxy at present as it was in the past.

It is not the first time that Archbishop Sviatoslav tries to set the two brotherly nations, the Ukrainians and the Russians, against each other. Probably, the ideas of narrow nationalism are dearer to him than the spirit of the Gospel which manifests itself in the words of St Paul who said that in Christ “there is neither Greek nor Jew” (Col 3:11). 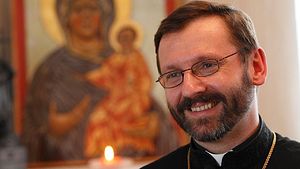 Uniate Archbishop Sviatoslav Shevchuk
Following the schismatics of different hues, the head of the UGCC makes outspoken attacks on the Ukrainian Orthodox Church, claiming that “the pain and suffering of the Ukrainian people against the war” are not “the matter of the UOC”. He continues, “Therefore, the common people ask the question: if the Church is completely abstracted from its people and acting from a position of outside judge or mediator, then who is it? How can a church that claims to be the only national Orthodox church of the people, separate of the matter of its life or death?”

The Ukrainian Orthodox Church fully shares the pain and sufferings of her flock both in the East and the West of the country. For her, the flock, entrusted to her by God, is living human beings whom she leads to Christ, regardless of their political views and preferences. She is aware of her duty – to help the afflicted, those who have lost their homes and livelihood, those who have lost their relatives and friends or have been severely injured, no matter on what side of the political conflict they have found themselves. The primary concern of the Ukrainian Orthodox Church in the current situation is to voice her call to peace and nationwide dialogue and to pray fervently for the suffering homeland, as His Beatitude Metropolitan Onufry of Kiev and All Ukraine has repeatedly demonstrated by his words and deeds.

The head of the UGCC refuses to regard the Ukrainian Orthodox Church as patriotic simply because she remains faithful to His Holiness Patriarch of Moscow and All Russia. Moreover, the Uniate leader goes as far as to make direct attacks on the Patriarch. “Whatever Moscow Patriarch tried to pretend to be “Rus” and not just “Russian,” in contemporary reality it is evidently not possible,” he says. “The moral right to represent 'pain and joy' to the people of Ukraine have been questioned even by the believers of the UOC, considering their Patriarch 'Patriarch of the aggressor.'”

These words of the Uniate first hierarch not only run counter to the inter-Church etiquette, established in the past decades, which does not permit such outrageous assaults in the media sphere; they are deeply insulting to millions of Orthodox Christians of various nationalities, united by the Russian Orthodox Church, who commemorate their Patriarch during every Divine Service.

It is the faithfulness to the Patriarch of the Ukrainian Orthodox flock, those “common people” and “the believers of the UOC,” on behalf of which Archbishop Sviatoslav for some reasons considers himself entitled to speak, that is the most convincing argument against the slander coming out of his mouth. This faithfulness is based not on a current state of things in the political sphere, but on the awareness that the spiritual kinship springing from the baptismal font of Prince Vladimir is stronger than any moods of time and unites Orthodox Christians of the Holy Rus’ regardless of borders and ethnic, racial and other differences. Among those who came out of Vladimir’s font are not only the Slavic peoples, but many other nations as well, among which the Russian Orthodox Church performs her ministry.

The allegation made by the head of the UGCC that the Russian Orthodox Church “is imbued with 'pain and joy' of the Russian people” only, is as deceitful and insulting as his attacks on the Patriarch of Moscow and All Russia. The Moscow Patriarchate is a multiethnic and supranational Church that unites Orthodox Christians living in Russia, Ukraine, Belarus, Moldova, the five states of Central Asia, the three Baltic countries, Japan, and China, say nothing of her multimillion and multilingual diaspora on all continents.

Cutting historical ecclesiastical ties between Moscow and ancient Kiev, “whence the land of the Rus’ came into being,” became the major slogan of the church schism formed in Ukraine in the early 1990s. The arguments used by the head of the Ukrainian Greek Catholic Church are in tune with those of the schismatics. While speaking of the necessity to reformat the existing canonical order in the Orthodox world, the leaders of the unia and the schism place the “establishment” of a national Orthodox Church in Ukraine (as if there is no such Church in Ukraine) in direct connection with the separation of the Ukrainian Orthodox Church from the Moscow Patriarchate.

At the same time, Archbishop Sviatoslav claims that “the analogy between the unity of the UGCC with the Universal Hierarch and unity of the Ukrainian Orthodox Church with Patriarch of Moscow is, put it mildly, the failure.” Indeed, it is difficult to draw a direct analogy, since the dependence of the UGCC on the Roman See is more immediate than the dependence of the UOC on the Moscow Patriarchate, which is merely of the spiritual nature.

The Ukrainian Orthodox Church is a self-governing Church, independent of the Moscow Patriarchate in administrative and financial matters. The Holy Synod of this Church elects bishops without seeking Moscow’s approval. The only way the spiritual ties of the Ukrainian Orthodox Church with the Moscow Patriarchate manifest themselves is that the Patriarch is commemorated at the UOC parishes and approves, according to the UOC Statute, the election of a new Metropolitan of Kiev and All Ukraine.

The Roman Pontiff has the similar right in respect to a newly elected head of the Ukrainian Greek Catholic Church. However, the Pope wields much more considerable power over the UGCC than the Patriarch of Moscow and All Russia wields over the Ukrainian Orthodox Church. According to the Dogmatic Constitution “Pastor Aeternus” of the First Vatican Council, whose decisions are obligatory for all Catholics, “the Roman Church possesses a pre-eminence of ordinary power over every other Church, and that this jurisdictional power of the Roman Pontiff is both episcopal and immediate. Both clergy and faithful, of whatever rite and dignity, both singly and collectively, are bound to submit to this power by the duty of hierarchical subordination and true obedience, and this not only in matters concerning faith and morals, but also in those which regard the discipline and government of the Church throughout the world.”

Following the logic of Archbishop Sviatoslav’s statements, in order to become truly national and patriotic, the UGCC would have had, first of all, to secede from the Pope, whose position on the situation in Ukraine the head of the UGCC publicly criticized as, allegedly, not corresponding to the facts. We clearly see double standard in the words of Archbishop Sviatoslav. From his point of view, the Ukrainian Orthodox Church, linked with the Moscow Patriarchate only by spiritual and prayerful bonds, should secede from it in order to get the right to call herself a national and patriotic Church, while there is no need for the UGCC, which is in direct administrative dependence on the Pope, to secede from him.

The supreme authority of the Moscow Patriarchate has always believed it important that a full-fledged dialogue between the Ukrainian Orthodox Church and the UGCC should continue, since the dialogue is necessary, first of all, for restoring peace in the longsuffering Ukrainian land. However, the success in this matter can only be achieved provided that the rhetoric, aimed at stirring up interethnic and interconfessional hatred, is not used any more. The Department for External Church Relations of the Moscow Patriarchate expresses its sincere hope that the Primate of the Ukrainian Greek Catholic Church will not resort to such rhetoric in the future.

We are praying to the All-Merciful Lord that He may grant the long-awaited peace and accord to the longsuffering Ukrainian land in the nearest future. Russian Church accuses Uniates of enticing violence against Orthodox Christians in Ukraine
The Moscow Patriarchate has again expressed its concerns about the support provided to Ukrainian radicals by Greek Catholics (Uniates).
Comments

ormoz12/30/2019 9:53 pm
I talked to a few high ranking of the Ukrainian church and found out they are very pro American and west! They believe that Putin ordered the crash of the air plane that killed the polish president!!!!!

Peter D. AGLIONE 10/25/2015 1:40 am
Such dissension between holy and apostolic churches offends Christ who established One Church, undivided, not a divided and schismatic church. It behooves all of the principals involved on both sides to find. THROUGH THE HOLY SPIRIT common ground so that the Chuch that Christ founded may be ONE as Christ prayed to His Father.
Peter D. AGLIONE, Hawthorne, NY, USA, Petradom737@aol.com
×