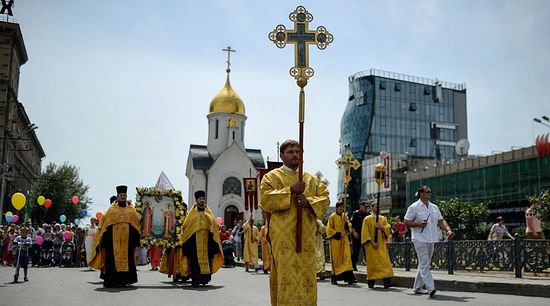 Priests during a cross procession dedicated to Sts. Pyotr and Fevronia, held as part of the Day of Family, Love and Fidelity festivities in Novosibirsk. © Alexandr Kryazhev / RIA Novosti

A Russian Orthodox bishop has told the government commission on health that it’s wrong to fight AIDS through sex education and the distribution of condoms, suggesting instead to promote chastity, faith and patriotism among citizens.

Bishop Panteleimon of Orekhovo-Zuyevo noted that the church officials were happy that Russia was not adopting the so called “harm reduction” programs like free handover of condoms or replacement therapy.

“We know that we need different methods and programs. I hold that AIDS can be defeated not only by explaining the dangers of this disease, but also through propaganda of healthy moral values,” he said.

The cleric told the government officials that they must promote chastity among the population, especially among children. He also claimed that the word had been completely forgotten in Russia and suggested refreshing its definition as “not simply abstaining from certain pleasures, but a wholesome perception of the world, with the love to family, patriotism, faith and intellectual activities.”

The bishop reported that the Russian Orthodox Church had already developed and tested several AIDS prevention programs for children in primary and secondary schools and for college students. He also said that over 10,000 people had already taken part in these programs that focused on traditional family values.

The government commission on healthcare held a special session dedicated to aids on Friday. During it Prime Minister Dmitry Medvedev quoted the Health Ministry data that the number of HIV-positive people is growing in Russia at a rate of 10 percent a year. Health Minister Veronika Skvortsova warned her government colleagues that without urgent measures Russia could face an AIDS epidemic as soon as in 2020.

Last year, MP Roman Khudyakov of the Liberal Democratic Party prepared a bill ordering the creation of a national database of people carrying dangerous contagious diseases. If the bill is passed a special agency would collect medical records and make patients undergo fingerprinting. The new rules would apply to Russian citizens and visiting foreigners.

Khudyakov said in press comments that several federal ministries and agencies, including the Federal Migration Service, Interior Ministry, Emergencies Ministry and Prosecutor General’s Office had approved his draft, but as of today the parliament has not looked into it. Orthodox Africa: Father Mwangi’s orphanage
Fr. Mark Mwangi took us to his orphanage known as Orthodox Africa, which is situated near the border between Tanzania and Kenya. We invite you all to follow us on this day we spent with this Orthodox priest. An Orthodox-Evangelical Alliance?
Last week, Metropolitan Hilarion Alfeyev, the foreign minister (so to speak) of the Russian Orthodox Church, visited Billy Graham to wish him a happy 96th birthday.
Comments

Archbishop Fulton J. Sheen was right about Russia- back then, communism was the plague that Russia had spread, but now, she is Our Lord's mightiest instrument, because Russia has zeal and the fire of the Holy Spirit.
×