In its special address, approved at the meeting of the Holy Synod in Kiev on October 27, the Ukrainian Orthodox Church of the Moscow Patriarchate called upon its faithful members not to give in to provocations and expressed its concern over “the situation around the preparation for the Pan-Orthodox Council”. The Church has addressed all those involved with the request “to do everything to preserve the rules, traditions and customs of the Holy, Apostolic Orthodox Church”. 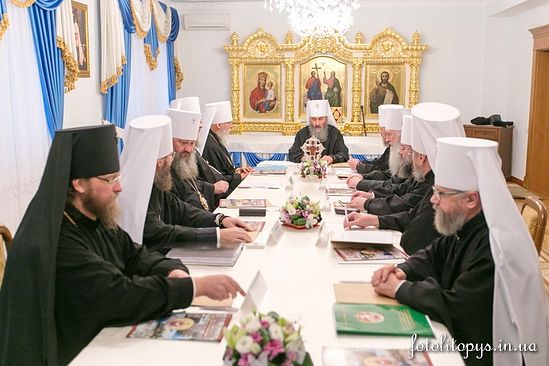 The message of the Holy Synod of the Ukrainian Orthodox Church (UOC MP) to its faithful members:

Today the Ukrainian Orthodox Church together with the whole of the Ukrainian nation is looking for a path to national reconciliation. We see with joy how the tensions are fading away in the Lugansk and Donetsk regions and the truce is going on; we hope that it will grow into a real lasting peace. Our Church has many times stressed the need to search for peaceful ways of settling this difficult armed conflict. And today we sincerely welcome the efforts of the Ukrainian state to overcome this crisis.

Recently the state authority has made considerable efforts to solve the problems of the relations between the Church and the state. Today, religious organizations have already been given a right to establish new educational institutions, the statute of the service of Church chaplains in the Ukrainian Armed Forces has been approved, the order of state recognition of theological higher education, academic degrees and ranks, issued by theological institutions of higher education, has been worked out. Now the Verkhovna Rada (the Ukrainian Parliament) is discussing several bills which are vital for the Church life.

Despite the mentioned progress in the Church-state relations, there are cases of civil rights violations on the religious ground in a number of the Ukrainian regions. Specifically, recently there were new attempts to seize churches of the Ukrainian Orthodox Church, cases of violence against believers and, sometimes, even attempted murder. It is not for the first time that we have to state with regret that some of local bodies of power allow violation of the current national legislation, while law-enforcement agencies do not always stand up for legal rights of religious communities, clergy and believers of the Ukrainian Orthodox Church.

Not only does all of this prevent Ukrainian citizens’ from realizing their constitutional rights to confess their faith freely, but it also provokes social tension in our society. While the extremely difficult peace process is going on in Donbass, we are faced with the danger of destabilization of the social situation in other regions of the Ukraine.

Today the Synodal Legal Department is thoroughly monitoring all cases of violation of the legislation against religious communities of the Ukrainian Orthodox Church and is promptly reporting them to the law-enforcement agencies so as to prevent fomenting of religious strife. We hope that all such conflicts will be investigated justly and without bias. The unlawfulness of the actions against the clergy and laity of our Church has been proved judicially more than once. The Holy Synod of the Ukrainian Orthodox Church is asking all ruling hierarchs and clergy to inform the Synodal Legal Department about all the attempts to takeover churches and other cases of violation of rights of believers of our Church without delay.

In the present difficult situation our Church feels an acute need for support by world Orthodoxy and the international community. That is why the Department for External Relations of the Ukrainian Orthodox Church is monitoring cases of the violation of believers’ rights and is reporting them to Local Orthodox Churches and international human rights organizations.

Today our task as Christians is to preserve peace in our country. Let us not give in to provocations and not be involved in the confrontation on the religious grounds. We must firmly oppose all attempts to undermine our country from inside.

Our main weapon in this spiritual battle is a genuine Christian love for our neighbors. Our Lord Jesus Christ is calling upon us: But I say unto you, Love your enemies, bless them that curse you, do good to them that hate you, and pray for them which despitefully use you, and persecute you; That ye may be the children of your Father Which is in Heaven (Mt. 5:44-45). Animosity between people is overcome by love. If the Lord is sending us trials, it means He cares about our perfection, He is giving us an opportunity to grow in love for our neighbors. See that none render evil for evil unto any man; but ever follow that which is good, both among yourselves, and to all men (1 Thess. 5:15).

We think it is our pastoral duty to say a few words about our concern over the situation around the preparation for the Pan-Orthodox Council. We are addressing all those involved with the request to do everything to preserve the rules, traditions and customs of the Holy, Apostolic Orthodox Church which are the basis of our all-Orthodox unity.

May the blessing of the Lord be with all of us!

On behalf of the members of the Holy Synod of the Ukrainian Orthodox Church,

+ Onufry, Metropolitan of Kiev and All the Ukraine, primate of the Ukrainian Orthodox Church”.