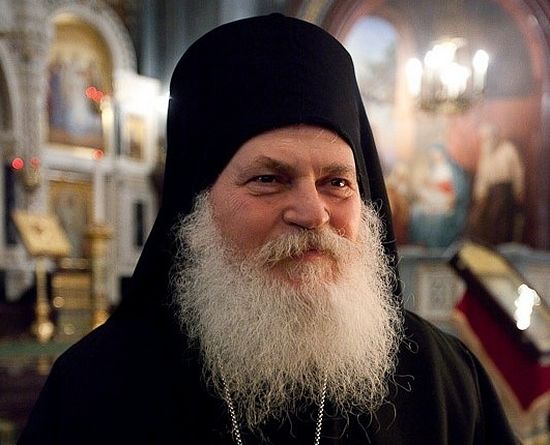 Elder Ephraim said these words during his meeting with head of UOC MP, His Beatitude Metropolitan Onufry of Kiev, who visited Mt. Athos last week.

The elder shared his concern about the events in the Ukraine.

The Athonite elder wished the Ukrainian people always to be under the protection of the Mother of God.

“We are praying with humility so that the Ukrainian nation might be protected by the grace of Jesus Christ,” he also said.

On March 13-14, 2015, the delegation of UOC MP headed by its first hierarch made a pilgrimage to Mt. Athos (Greece) where a prayer for the Ukrainian state and the long-suffering people was offered up. His Beatitude Metropolitan Onufry prayed at the shrines of Athos so that the war in the Ukraine might stop quickly and the long-awaited peace might come.

A church in Ternopol region in the Ukraine seized by “Right Sector”
On October 5, the parishioners of the Church of Holy Archangel Michael in Butin village of the Zbarazh Deanery of the Ternopol (Ternopil) Diocese (the Ukrainian Orthodox Church of the Moscow Patriarchate – UOC MP) could not celebrate the Liturgy at their church because of a violent occupation by the “Kyiv Patriarchate” schismatics and representatives of the “Right Sector”.
Comments

Ron White 12/1/2017 9:22 am
I’m Roman Catholic and. Enjoyed the article. I wish the Orthodox and Roman Catholic Churches would unite again..We.are all brothers in Christ. May GOD BE WITH YOU .
×